Eh, I said I would leave that asteroid field. We are beings of our word.

So I thought about the various approaches, and decided to take the “civil discussion” approach.

I will activate Mallice, send in the war sun, cruiser, and two fighters from Vega, and the carrier, dreadnought, two fighters and two infantry from Creuss.

Sai Seravus will give me two fighters for the trip through the wormhole, and I’ll get to use dimensional splicer to put a hit on one of the cruisers.

Oooh, I’m gonna make some popcorn for this one!

@Marx asked for a die roll:
Well, might as well get this party started!

@GabrielH, what do you want to take those hits on?

Oh, you should also decide which ships are carrying what (Fighters and Infantry), since it will matter as I start blowing your ships up…

@GeeBizzle you also have a PDS that can fire into the fight (specifically targeting Ghosts since they activated the system).

Did you also want to shoot them? It’s a free action (doesn’t get interrupted by Treaties or whatever).

Capacity doesn’t matter during battle. It will get recalculated at the end. Really, which ship is carrying which unit only matters when transporting the units.

Not for the Fighters, maybe, but the Infantry will matter.

(EDIT: I think… I have always played that it a ship transporting troops gets exploded the troops go down with it, but I absolutely could be playing that wrong!)

Per the rules, you simply check the capacity after the battle, and choose what to eliminate if you do not have enough for all your units.

Okay, so just need @GeeBizzle to decide if they want to take that PDS shot at the Ghosts or not, and then Gabriel can allocate hits and we can move on to the first round of firing.

EDIT: Because of Plasma Scoring, the Mentak can actually take two PDS shots at the Ghosts if they so choose. Just sayin’.

Since the titans have been so accommodating of late let’s take those two shots at the ghost.

I was not loving having a war sun so close.

Okay, so that’s a total of four hits on the Ghosts that need to be allocated.

@GabrielH, your choice what gets hit. You can absorb 2 shots by using Sustain Damage on your Dreadnaught and War Sun, but then you risk that I (or somebody else) will play a “Direct Hit” which will destroy the ship that uses Sustain Damage. Or you can just take all four hits on Fighters (you have 6 right now after all) and avoid that issue.

Either way, decide and then we will move on to the next round of shooting.

I’ll play “Maneuvering Jets” to cancel one hit, sustain on the dreadnought, and lose two fighters.

@Marx asked for a die roll:
Cool! First round of live firing!

Titans firing back has 4 Cruisers hitting on 6+:

Okay, three hits on each side. I will absorb one with my Agent and take 2 on undamaged Cruisers, healing the one that was damaged by your Tech.

@GabrielH, where do you want to take your three hits? 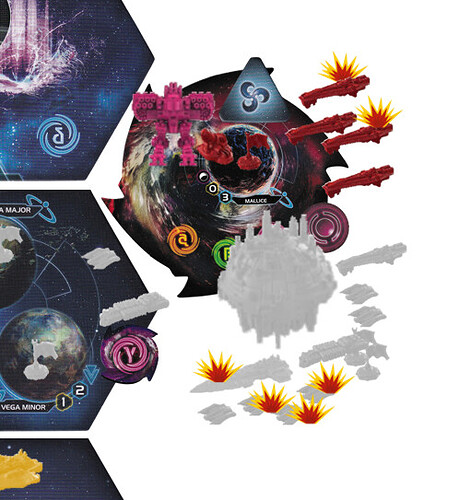 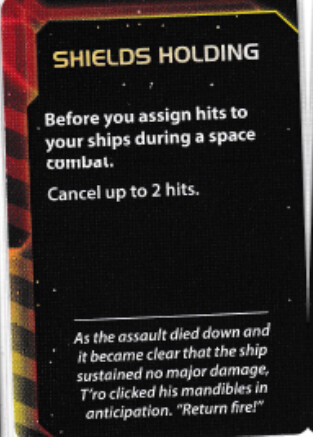