As the late morning sun shines through the slotted windows of The End of The Road you might mistake it for any coaching Inn found in the Kingdom of Serk.

So much is still unknown, and the rumours build upon each other. Few facts are certain, but there are Goblins here and many far more dangerous beasts.

There are those who stoke the rumours, like Hugo, the landlord, who buys souvenirs from those adventurers who make it back from the wilds. A man who always has a twinkle in his eye and a hot meal ready at any hour. He is the heart of this rapidly expanding community.

In the shadows leans Lem, the Warden of the new road through the Goblin Marshes that links this place back to civilisation. He is either watching everyone like a hawk, or is asleep where he stands. His armour is shining and new, but his riding boots and cloak betrays the long hours he has served.

From all corners of the Kingdom they come, searching for a fresh start, a new life. Each has a story to follow…

Enfys hauled her kit up the road and into town. She hadn’t been this far from the sea in nearly 5 years. Things had gone to post on her last job; whoever had put the crew together had got it so, so wrong.

She needed somewhere to get away for a while, build her strength back up and try to get some cash.

A contact at the harbour had told her to come here and look for Hugo. A promise of decent food, a place to lie low for not much money. And no questions ask.

She looked up at the End of the Road. So this was…home?

Enfys probably has sore feet after the long walk along the raised roadway through the marshes, but the coracles of the odd eel trapper in the brackish water should at least raise a flicker of interest.

Entering the Inn, what do you do?

Enfys approaches the bar. It’s quieter than the haunts she’s been in by docks around the world but habit sees her checking the clientele for troublemakers.

‘Are you Hugo? I need a room, somewhere quiet’

Heavily cloaked and dour of demeanour, a phalanx of paladins ride up to The End of the Road. Each one is geared for war, beneath their cloaks are a brutal panoply of weapons and holy artifacts that would make any demon tremble.

Except for one, lightly equipped, who slides off from riding behind the leader and lands gracefully on her feet. The only one without a horse, she is handed the lead of a reluctant donkey.

The leader - a tall, stern woman, pronounces a blessing while the acolyte stares off into the middle distance. A huge half orc with a white beard then speaks some stern words that cause uncomfortable stirring among the other riders - but he soon ceases his preaching with exasperation. The girl in the center of the group looks back at him with a blank expression, and then winks at the assembly, who quickly stifle their chuckle. The leader dismisses the others, ruffles the girl’s short black hair with motherly affection and hands her a longsword, takes one last look at her now former charge, and gallops away.

“Bye.” Ssora calls out, waving with a fanged smile as what was functionally her family for the last ten years quickly disappears down the road. “Just you and me for now.” She addresses the donkey. It looks uncomfortable at the thought. “Until I run out of other food, I suppose.” She says cheerfully, once again flashing her fangs in a charming smile.

After tying the donkey outside, she’ll enter the Inn and survey the room, her green, snake-like eyes noting persons that she might be interested in.

@Captbnut What does Ssora see when she looks at Enfys?

Enfys, having rested has returned to the bar for food. She is still slightly swaying as she walks, not yet used to being on dry land.

To the casual observer, Enfys, tucked in the corner could look just like a pile of rags and bones. To the slightly less casual observer, a waif, someone to be disregarded. That’s the way she likes it. Enfys has won many a fight before her opponent really knew that it had started.

Sea worn and tanned, but with bright blue eyes, Enfys looks up at the girl who had just walked in. Fangs? Not seen those in a while. Having noted the scene outside and quietly breathed a sigh of relief after the war party left Enfys is torn. She doesn’t want to attract attention, but she’s been young, alone and hungry before.

Muttering ‘idiot’ to herself, she looks at the girl, gestures to the empty chair and says, ‘have a seat, would you like some lunch?’

Ssora looks absolutely delighted to be invited to lunch, and immediately takes up Enfys’ offer. Ssora is somewhat more unsettling close up - her green-blue hued skin shimmers oh so slightly when scales catch the light, and there is a coldness in her strange eyes, belied by the warmth of her expression and the youthful appearance and energy.

“Hallo! I heartily accept your invitation. I am called Ssora, somewhat associated with the Order of Holy Judgement. I was worried that it was going to be just big smelly lumberjacks up here, but I’m glad I was wrong.” She seems quite relaxed as she pulls up a seat, and though there’s some ‘I was raised by paladins’ in her speech, there is also quite a lot of irreverent street urchin.
“What brings you out to the end of the world? Money, fame, or perhaps enlightenment?” She emphasizes this last word with some playful distaste. “I’ve been informed that endless bogs and goblins are quite the spiritual experience.”

'Laying low, my last job went to hell. Raising some money and having some fun. Not had much time for that recently. I think the woods and forests are going to interesting to explore at least.

What about you kid? Where have the others gone? Are they coming back for you?’

A man with a neatly trimmed beard steps up to the table.

“Can we get you anything to eat, travellers?”

‘I’ll have whatever is good please, Ssora (@Sagantine), what are you having?’

Back to the waiter, ‘so, have you been here long? I’ve heard stories about the woods round here. Is there good exploring?’

The hint of a sigh escapes his lips.

“Ah, an adventurer? In that case your luncheon is free.”

He gestures to the far corner. “The names Riker, feel free to look at the map and Hugo’s trophy collection, such as it is. I’ll let you eat in peace before letting him know of your intentions, otherwise he’d chew your ear off.”

,Very kind of your Riker. I’ll have a look at the maps while we’re waiting for our food.’

What about you kid? Where have the others gone? Are they coming back for you?’

Ssora looks very serious for a second and puts on a righteous accent. “I must not be aided in my journey to god, and they must remain ever vigilant over the Kingdom of Serk - that hasn’t seen a demon invasion for decades.” She smiles again. “No, they won’t be back for me. I’d never return willingly either.”

When Riker arrives, Ssora inquires about the availability of meat. “It’s all I eat, when possible.” She says sweetly.

Ssora would also like to take a look at the map!

Riker mutters something about fresh kidneys and disappears out of sight.

One entire wing of the main hall is devoted to the map and Hugo’s collection.

Attached to the wall here are various prizes from this new land, a strange, alien skull with a prominent beak, some strange coins, more like disks than the regular coins in your own pockets, various hints at the strange world outside.

The map itself dominates the space. A disk of wood, fashioned into a massive table. Even though this place is unknown and unclaimed, a few locations have been carved into it’s great surface… 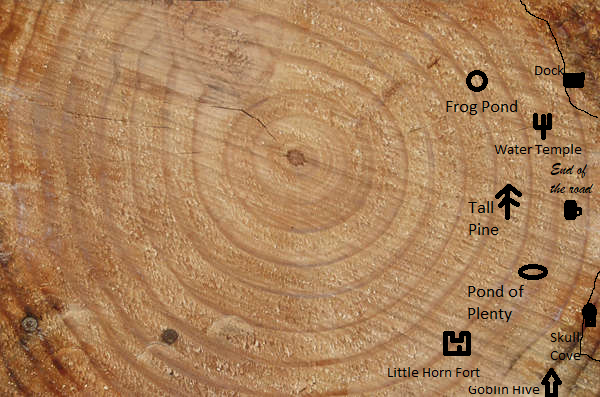 Another figure has come in, not stealthily but not making a grand entrance either. He’s a human, of middling height and unexceptional looks, with a garment that’s cut like a good travelling cloak but in colour seems to be somewhere in that space between rust, mould, and plain black.

He’s carrying the usual traveller’s baggage, but rather than the conventional sword or mace there’s a scythe resting over his shoulder, and hanging on his chest is a holy symbol of Teleute, goddess of death and rebirth, endings and returnings.

“Ah, landlord? A room, sir, if you would, and something to clear the marsh airs from my throat.”

Ssora scrutinizes the map. She’s extremely bad with maps, though this one is much more simple than most.

“Lots of empty space. And some promising pre-explored spots. Hmm. Goblins.”
I wonder if goblins are good to eat? She is careful not to say that out loud.
“Anything pique your interest, En…” The name isn’t quite stuck yet so she has a moment’s pause. “Enfys…?”

Speaking of piqued interest. She notices the newcomer, and spots the religious symbol immediately. Stifling her complicated feelings about scions of faith, she acknowledges his entrace with a nod and a smile.
No clue what god or order that is. I’m sure I’ll find out soon if he’s the talking type.

Bodily needs taken care of for now, Ash wanders over to look at the map. “They say that there’s all sorts of lost knowledge out here…”

(For people who notice such things, there’s a worried undertone of “and I only just survived the road, this could be a lot worse”.)

Hugo, the landlord, having been summoned rubs his hands together.

“Welcome, welcome. My home is your home. We have private rooms and fresh meals. Warm baths and every luxury of home.”

He surveys the weaponry on display.

“You have the look of those who will be the new heroes of this new land.”

He taps the map with his hand.

“It’s a beauty. You can take your own rubbing for a single gold piece…”