The best of roll n' writes

Inspired by the SUSD boys’ recent video take on the genre, I know I would love to hear which roll n’ writes people love and why (especially perhaps less well-known examples of the genre)!

I’d say i’m quite a fan of roll and writes - there’s just something about the tactility of paper and pencil and the kind of stripped down (in most cases) design ethos it generates that grabs me.

My favourite (so far) is Welcome to… It strikes such an interesting combo of silky smooth gameplay with a decent amount of stuff to puzzle over. And no downtime, which is always nice. The production is also great.

My less well-known pick would be Roll Through the Ages, it kind of predates the whole roll and write craze (and theoretically is a spin off from a game I can’t stand) but it holds up really well. Interesting decisions from almost every round and with enough tension from the requirement to feed your people and avoid disaster to keep folks on their toes. The Civ theme even works! The expansion is also a free sheet on BGG that adds just a few new options and is totally worth checking out.

Oh, but you do nothing on your turn unless you’re the active player

. I think more modern designs are generally good in trying to avoid that, though with 2 or 3 it works fine, but it does mean you can’t just add players like you could with Welcome to… But I’d check it out if it’s available - is it still available? I hope it’s still available - it deserves to be!

Let’s Make a Bus Route is still my fave. What is annoying is that it is only available in Japan. The rulebook says we pick up passengers, but I always think that our buses slam through pedestrians like tourists, students, the elderly, and score points accordingly.

I’ve not played many, or repeatedly, but both Welcome To and Railroad Ink were enjoyable.

I’ve got the P&P of Super 4Cade Pinball, which is also very good but I don’t have time for a solo game at the moment.

I’ve only got Welcome To which the parents enjoy when I take it back home. Though the initial teach was a bit rough and my dad still plays it a bit wrong. We still have fun though.

I’ve got all 4 copies of Railroad Ink due to arrive later in the year having played it on the RnW stream that SUSD did.

Similarly I played Cartographers on that stream which I enjoyed and would definitely play again if board game cafes were open or I could wrangle enough people on TTS.

For me it’s OctoDice. I’ve had it since 2017 it’s a bit older than that though. It’s a spin off of Aquasphere despite being from a different designer and publisher.

For a roll & write it does some interesting sort of euro engine building things. Also for me crucially there aren’t best ways to play that makes all other strategies pointless cough, ganz, cough. So you have to navigate a path and play with risk on a game by game basis. Also it has a use other people’s dice mechanic that is excellent for engagement and a few highest placed gets more point for just enough interaction to stop it being a purely solo experience when playing with friends but not enough to make others rolling well to ruin your game. Having had it for a while it’s stopped me getting in to the more recent games in the genre as none of them have got higher in my desire to play than OctoDice. Excellent game.

Let’s Make a Bus Route is still my fave.

I want this so bad, the idea of a shared 'n’write board speaks to me, however it is rather expensive

We’ve played a ton of Silver and Gold

Ganz shoen clever is a high mark for me. So far the only roll and write that has got the full pad treatment.

Cartographers is probably my second favourite.

I play Ganz shoen clever regularly on my phone (both versions (1 & 2), as well as the sequel Doppelt So Clever (1 & 2)). The one time I played live with other players, it fell flat for me.

I like Cartographers a lot. A couple of the scoring cards are a bit convoluted. The player interaction is meaningful and makes sense with the theme.

I prefer Roll & Writes as apps in general and some not even then, except Railroad Ink that one just makes my brain go all “oO more more more”–I once played 10 games in a row.

I will play them when someone wants to and I’ll put the ones I have on the table as fillers but I am not buying any more anytime soon.

YAHTZEE IS THE ONE AND ONLY ROLL AND WRITE, ALL OTHERS ARE IMPOSTERS AND MUST BE DESTROYED.
Except Welcome to… your perfect home that nobody wants to use the real title of.

Ganz schön clever has been a fun solo time killer as an app, but I don’t own a physical copy.

On Tour’s a decent one, which I’ve enjoyed a few times

My favourite so far’s Kokoro/Avenues though. Plenty of opportunity for some forward planning to pay off. There’s a really good push your luck aspect to it where just needing one card can either make or break your entire turn, but it feels like hubris when it doesn’t pay off rather than just being cheated by chance. Getting a final couple of rounds where you can connect lots of separate routes to score big feels good

Possibly on the fringe of the definition of a roll and write, there’s NMBR9 too, which is fantastic. One of our staple opener/closer games, and enjoyed by everyone that we’ve introduced it to. Endlessly frustrating but satisfying

You could turn NMBR9 into an R&W if you could work out some way of recording things so that it was legible.

Certainly as an app it would be hard to tell apart. I agree, it has the same idea of “here’s The Thing for this turn, and everyone has to make the best they can of it”.

Like many others here Railroad Ink is the game that’s lasted for me. (Though I need to get some good-quality pens.)

YAHTZEE IS THE ONE AND ONLY ROLL AND WRITE, ALL OTHERS ARE IMPOSTERS AND MUST BE DESTROYED.
Except Welcome to… your perfect home that nobody wants to use the real title of.

OMG WE SHOULD BE FRIENDS!

(And no one calls Welcome to Dino World by its real name either. What gives?!)

I enjoy the idea of R&Ws, but the implementation always falls flat for me. Gan Shon Clever is great and carries that Yahtzee feeling of limiting options slowly closing in on you. Same for Welcome to, but slightly less Yahtzee-ish with the lack of dice and more open choices.

The map based ones like Dino World and Railroad just don’t do it for me for some reason. They’re sedate and lack tension. You do things until the game ends, then see who’s won, and then you shrug and say “okay. Congratulations”.

My mind needs the juicy juicy numbers. The people who think Yahtzee is throwing dice three times just don’t get it. Philistines!

Gan Shon Clever is great and carries that Yahtzee feeling of limiting options slowly closing in on you.

And then you get that roll when you’re not the active player that leaves you nothing but crap. Yes, you can leave yourself openings to mitigate some bad rolls, but there are many bad rolls which just mean you lose. The problem with limiting options is eventually you’re just going through the motions, taking zeros on the Yahtzee space because you have nothing else to do.

And then you get that roll when you’re not the active player that leaves you nothing but crap. Yes, you can leave yourself openings to mitigate some bad rolls, but there are many bad rolls which just mean you lose. The problem with limiting options is eventually you’re just going through the motions, taking zeros on the Yahtzee space because you have nothing else to do.

I can tolerate/enjoy swingier games when they’re short. There’s a big difference between seeing you’re going to lose in a game of 18XX with 4 hours to go, and losing massively in a half hour R&W. If you can fit multiple games in a session it provides more leeway for looseness.

Just as more rolls of a dice mitigate dice being a RNG, playing multiple games in quick succession mitigates swinginess in any individual game.

Just as more rolls of a dice mitigate dice being a RNG, playing multiple games in quick succession mitigates swinginess in any individual game.

Sure, and that’s why the app sits on my phone ready when I need a few minutes of distraction.

Floor Plan is me fave, having played Railroad Ink, Cartographers, Welcome To and Corinth as well. Theme plus multi-uses for the dice are big winners. Hits the proverbial. 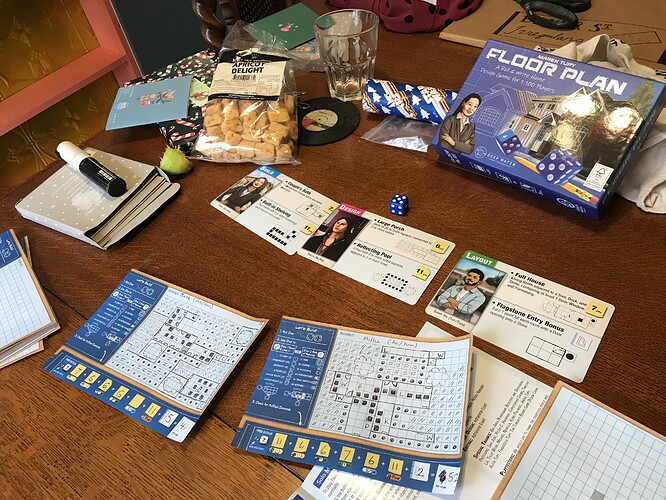