@Whistle_Pig i can probably get my hands on PoG and am happy to teach it. Can’t really do either with Here I Stand.

I’ll probably be there by 4 on Saturday (hopefully a bit earlier).

How late did you stay gaming on Saturday last year?

I know how to play JoCo, but I’m happy to miss it.

We stayed until 10ish as I recall? Likely to do so again.

Apart from Bohnanza and Happy Salmon I’m not sure what to bring. Would there be interest in Spirit Island, Troyes, Menara or Gingkopolis? I’m enjoying Skymines but it’s s big teach.

We have the room from 9am till 11pm on Saturday, 9am till 6pm on Sunday. Last time we didn’t push it right to the end, and we’ll need a few minutes for clearing up, but I’d guess 10ish as Lordof1 says.

A general note for everyone - PM me for my phone number, because if you arrive outside the core library hours (ending at 1pm on Saturday) someone will have to let you in.

What did you do for food last year?

There’s no catering directly in the library, though we do have use of kettle, fridge and sink. Bringing your own food is fine.
At the other side of the car park there’s a Co-op Food (7am-10pm both days).
A short walk away there’s a Tesco Express (7am-11pm both days).
There are also restaurants about as close as that - I’ve eaten at Chanak (Turkish) several times and enjoyed it. Also there: Coriander (Indian Fusion), Smiles (fish & chips takeaway), The Last Viceroy (Indian), Kong’s (Chinese).

Oooh or we could do ‘loser gets eaten’?

Oh, not again. It took me months to lose all the weight last time I played that.

Just visited the library and picked up the keys. All is basically as before, except it’s easier to chock the side door if you’re bringing in lots of bags etc.

I’m told the Internet connection is being slow and/or unreliable (the council are blaming BT, BT claim they’ve fixed it but it’s still a bit iffy) so I won’t try to schedule any parallel sessions in other places, though if someone feels like it I’m happy to take a chance.

Thanks, Roger. Looking forward to it!

I’ve just bagged up a few games that are easy to explain. I’m not keen on trying to learn or explain anything too tricksy at conventions like this because my preference is to try and play as many games with as many people as possible!

Hi @Whistle_Pig I’m afraid I won’t make it this weekend after all, but if you’re in the Marlow area and looking to get John Company out for a spin more often, please get in touch. @RogerBW has my number.

I’m bringing Inis, Cosmic Encounter, and El Grande and some small box games - unless someone will be bringing those too. 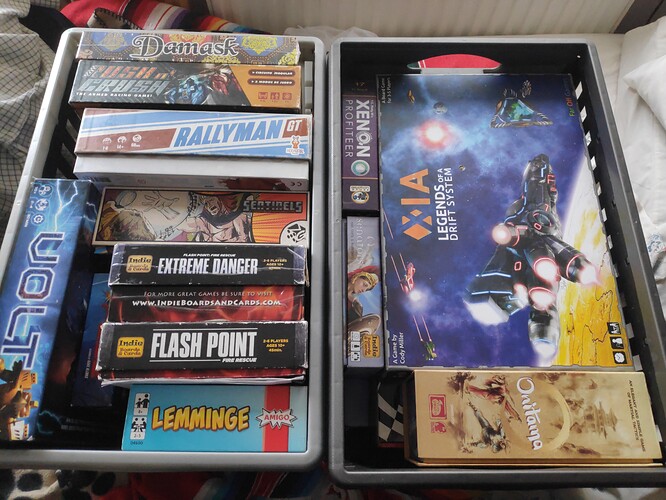 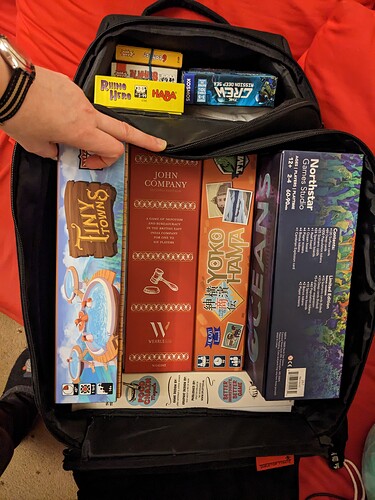 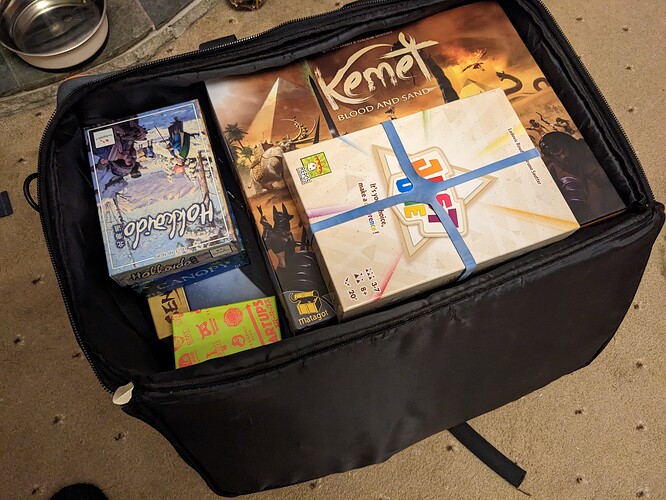 Not shown: Eclipse (under Kemet) and the Crokinole board

Very keen on Yokohama and Oceans

Is this like a his/hers thing? If so, which one is yours?