Star Frontiers — the original and… was it any good to begin with?

Hasbro and WotC definitely own all the copyrights on the existing Star Frontiers material. It’s even available in PDF, and has been for some years.

Well, there are two chances that I am going to buy a pig in a poke from an RPG designer with no track record, on the strength of it having the same trademark as a previous game that I didn’t play either: Buckley’s and none. So the slipshod “return” of T$R is nothing but an occasion to eat popcorn, to me.

However, I am always on the look-out for a powerful and flexible set of RPG rules that I might use to run my SF games without excessive house-ruling, and that is available to prospective players. So the news that the original Star Frontiers is available on line is of some interest. Is there anyone here who knows it well enough to, and is happy to, give a review or description of its scope, mechanics, and adaptability?

We played Star Frontiers a couple of times back in the early to mid 80s but I can’t say that it left a particularly good impression, mechanically or thematically. TSR’s Gamma World was more enjoyable in terms of theme but both were clunky if I remember, as most of those early 80s rpgs were. Best space sci-fi game we found by far was the WEG D6 Star Wars - itself a reworking of the D6 Space rules - and I can see that being pretty easily reskinned to another similar setting. If you want something chunky though then why not try Starfinder?

Played it once or twice in the mid 80s, but we had Traveller. What did SF have that Traveller didn’t?

I haven’t felt any particular urge to play it again.

In the US I found that Star Frontiers was often fondly remembered and had been widely played. In the UK it never quite seemed to get beyond the perception that it was childish, sloppily put together and hardly a match for Traveller. It didn’t help that the designers complained about TSR having butchered the original submission and redesigned it by committee. 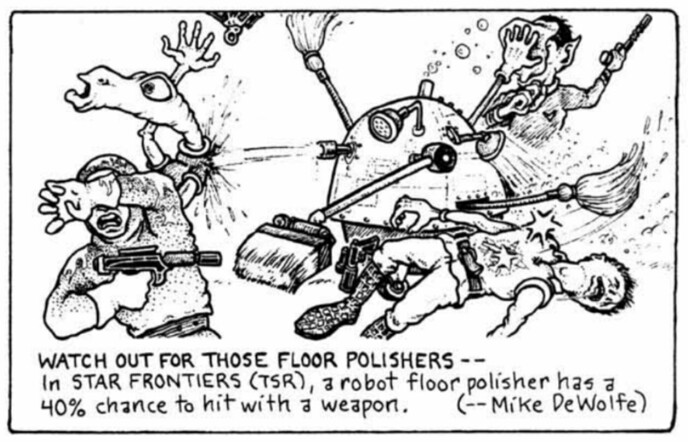 I also liked the Vrusk, the benevolent insectoid corporatists.

The skill list is weird. The skills are very broad, like “Technician” or “Psycho-Social,” but each one has very specific subskills like “Repairing Machinery” or “Opening Locks” with different percentage chances for success and no rules for other uses of the skills. No way to improve the subskills separately, either. Level 2 in Psycho-Social, for instance, would give you a 30% chance at Empathy, a 30% chance at Persuasion, a 60% chance at Communication, a 35% chance at Hypnosis(!), and a 50% chance at Psycho-Pathology, and that’s all the skill can be used for.