It’s been puzzling people over at the RPG Pub too. It doesn’t help that TSR already returned a couple of years ago with the poorly received Top Secret RPG, causing much confusion as to whether there were now two companies calling themselves TSR.

Personally I’m with Roger one this. Although I enjoyed some of the TSR games they weren’t the products to aspire to in my circles.

I’m not convinced that the name is quite the draw some people seem to believe. If you’re old enough for it to matter than you’ll also remember the lawsuits and Gygax’s rants, whereas for everyone else TSR is a name they may recognise from games published before they were gaming. It isn’t even synonymous with D&D these days.

Personally I’m with Roger one this.

Me too, even if I had to look up what ‘peculation’ meant.

It’s even more fun than it sounds.

I think it’s exactly as exciting as e.g. the return of Atari. Which is to say, the trademark got resurrected but there’s no real continuity so who cares?

(Okay, so Gygax’s son is involved, but I’ve never read any of his designs, there’s no inherent reason he’d be any better at RPG design than the next guy, and frankly, I was never a Gygax fan anyway.)

TSR to me doesn’t mean “the magical name of my role-playing youth” but “the big company that sued everybody until peculation and incompetence took it down from inside”.

SPI died for our sins.

Over on EnWorld, there’s considerable discussion over TSR LLC’s registration of a trademark for Star Frontiers. The short version is that they’ve validly done so, but US trademark law requires that you actually engage in commerce using the trademark within six months of granting. This is to keep people from registering lots of trademarks and just sitting on them. So the new TSR have to do that by 22-dec-2021, or the trademark becomes ownerless again.

Ernie Gygax seems to be the principal at NuTSR. He has a less than stellar record on delivering RPG projects (there’s a Kickstarter from six years ago that has not yet delivered its goods), There’s legal debate in the US at present about the effects of Kickstarter projects: does running one count as commerce, or do you have to actually deliver goods?

Hasbro and WotC definitely own all the copyrights on the existing Star Frontiers material. It’s even available in PDF, and has been for some years. They let the trademark lapse in 2004. Evil Hat Productions registered the trademark in 2017, but let it lapse after six months by not engaging in commerce.

So, will TSR LLC publish a new Star Frontiers within six months? I would not bet on it, even if I cared. 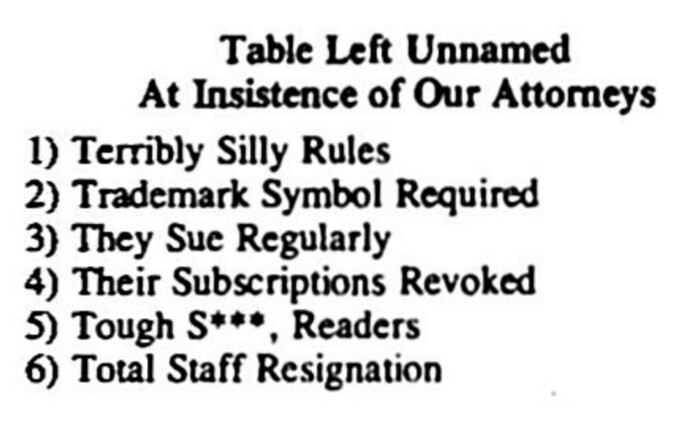 They anticipated Disney by over 30 years with the “when we bought this thing, we only bought the profitable stuff, not the liabilities” argument.

Looks like they’re really getting on board with tackling gatekeeping and being as inclusive as possible.

I picked up six issues of Gygax Magazine in pdf from them awhile back. I mostly did it specifically because I couldn’t get Dragon or Dungeon or any of those growing up and I figured I’d try out a gaming magazine during the year it was published as an exercise in deliberate nostalgia.

My own personal experience of Twitter has been a lovely place where I’ve made many new friends, although I use it much less than I used to. But oh dear the new @TSR_games are not doing a wonderful job of engaging with their audience. Or humanity.

From my point of view Twitter isn’t a cesspool, rather the way it works makes it easy to see nothing but negatives if that’s what you end up following. My timeline is generally great, full of lots of chat and positive stuff about gaming because that’s what I want to engage with. If you’re concentrating on a trainwreck then you’ll miss the countryside where it’s happening.

Having said that, some relevant posts and tweets about the TSR situation from those more closely involved (which I found on another forum, since I don’t follow the accounts on Twitter). It’s all possibly an even bigger mess than it appeared and the short version seems to be “don’t let these new TSR people have any of your money”: 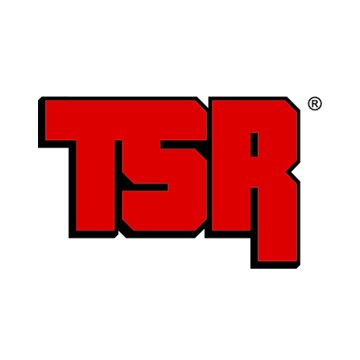 We have owned the TSR trademark since 2011. Last year, we missed a filing date, and another company registered it, though we are still using it in commerce. While we could win a lawsuit, we frankly don't have the money to litigate. So, we're licensing it back from them. (thread) 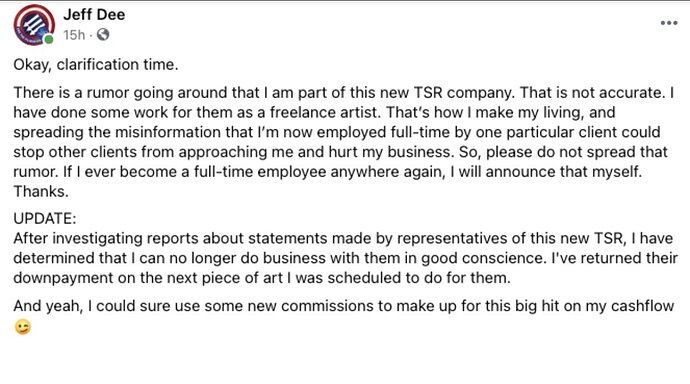 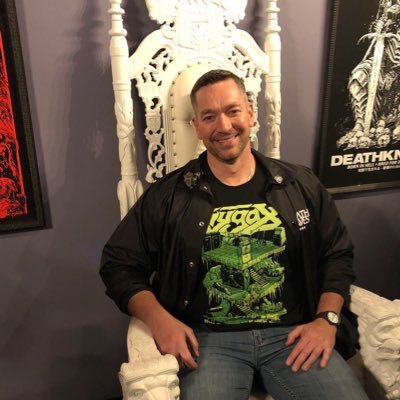 FYI- I am not involved with any TSR company nor is Gary Con nor anyone else in my family outside of Ernie. Full stop. That is all.

So yes, it’s all going terribly well and seems to achieve nothing other than upsetting those who actually have fond memories of TSR games, and forcing a number of writers and artists to make statements distancing themselves from the debacle. I’m off to make a cuppa.

From my point of view Twitter isn’t a cesspool, rather the way it works makes it easy to see nothing but negatives if that’s what you end up following. My timeline is generally great,

So is mine–on the surface. I carefully selected whom I follow and if all I do is read my timeline then sure it’s a nice place. But comments get toxic so quickly and often even the people I tend to agree with present their opinions in ways that I do not agree with.

I miss some of my timeline (I follow a lot of authors) but sometime during the pandemic I realized I was doomscrolling more than actually getting anything out of it and had to stop.

OK, TSRGames (topsecretnwo.com) and TSR_Games (tsr.games) are separate twitter accounts from different companies. I’m sure that will cause no confusion at all. Is there really that much nostalgia for three initials?

Is there really that much nostalgia for three initials?

Yes, among people who were on the fringes of the original company and see those initials as magical dollar-summoning runes.

I never liked anything TSR did.
The best thing that happened was that they got bought out by Wizards.

If you still feel like following this depressing spectacle then screenshots of the often quickly deleted messages are being collected at Tenkar’s Tavern. Think I’ll stay well on the boundary, glancing over the top of the 'paper every now and then.

Like Guvnor I never liked and did not long play anything that TSR produced. And I’m full up of popcorn and schadenfreude. I’ll let the rest of this go through to the keeper; it has no prospect of producing anything but rancour.