Sizes of boxes that feel... right

Clans of Caledonia is a heavy Euro on a smallish box.

I love the standard rectangular size boxes of my mid to heavy Rosenberg games. The standard TTR size boxes just feels too large for me.

I realise the older version is smaller…

The older version is huge! Way bigger than it needs to be.

Oops. The only older version I’d ever seen was the 2007 Fantasy Flight edition, which is smaller. I hadn’t realised that the game existed prior to that in much larger boxes : )

Ah, now I understand. The Eurogame edition is still the best though, oversized box and all.

I haven’t seen Birmingham, but it looks thicker. I prefer the art on it as well.

Ohh, just saw it sideways on @yashima picture right now. It might be actually the same size. Nice.

The Kickstarter editions of Brass are more standard thickness than the retail due to the inclusion of poker chips. So both Lanc and Birmingham have a standard and slim version.

Reminds me of all the photos going round of the KS boxes for Tidal Blades. HUMONGOUS box to fit in an elaborate custom dice tray. Why didn’t they just send the dice tray as a separate thing?!

Although I shouldn’t, I find myself wondering whether to buy the deluxe Brass with the stupidly reduced poker chip set and the oversized box for a significant “saving”, or the retail Brass and a poker chip set for more money but a sensible box size.

Hopefully I will eventually decide it’s all too expensive as I’ll never get to play it in person anyway.

I think the second option would be the sensible one, if any. Poker chips would make the game feel great, but I don’t think the extra size would be necessary.

Everything I thought of when I saw this on the other thread has been mentioned, including the game I actually mentioned in that thread being mentioned in the OP.

Battle for Rokugan remains one of my favourite games of all time. Weirdly, I bought A War of Whispers because it seemed like the danger kind of thing. Big game experience in a small box, but it is a kind of normal sized box, and after removing the actually large nuts like the board and player mats, I hid everything in the box under one hand. The fact they used the same box for the big version and the regular version is a tad frustrating. I would’ve loved this game in a tiny box. The board is the only issue you have.

We also recently bought the Abyss tableau builder game which comes in a nice little tin and I can see us getting that out a lot. We do still end up getting the big Abyss box out because my partner wants to use the pearls, though.

Reminds me of all the photos going round of the KS boxes for Tidal Blades. HUMONGOUS box to fit in an elaborate custom dice tray.

I saw one of those boxes in person a couple of weeks ago. I’d never heard of the game, but I recognise the title now because the box was massive, and I had to look closer to see what the heck it was. Very much one of those “I’m glad I don’t have to fit that into my shelves” moments.

Very much one of those “I’m glad I don’t have to fit that into my shelves” moments.

I could make a list of boxes that are too big… starting with Dwellings of Eldervale and sadly continuing with Clank Legacy (good game just too big) and Black Angel… At least they still all fit a Kallax, even Gloomhaven does…

I think Phil already covered where I was going when he pointed to Paperback and other Fowers games. Burgle Bros was my first thought, but they’re all reasonably sized, packing a lot of game into a tiny space.
Among others which come to mind that are just right are Bargain Quest, Kingdomino and Escape from Aliens in Outer Space. Sagrada was a good one for the space left for the 5-6 player expansion pieces to fit perfectly.

I think I tend to like smaller boxes better, and square faces for bigger boxes. As long as there isn’t a massive void of empty space in the box (Machi Koro? Splendor?) I’m generally happy though.

Calico ships with eight sheets of thick punchboard and four large, thick, dual-layered player boards. The box isn’t especially tiny, but it’s got that effect where it feels impossibly heavy when you lift it for the first time. Overall I’m guessing it’s about the size of a Garphill Games box and I’ll admit I was worried about set-up/pack-up time when punching the hundreds of tokens… 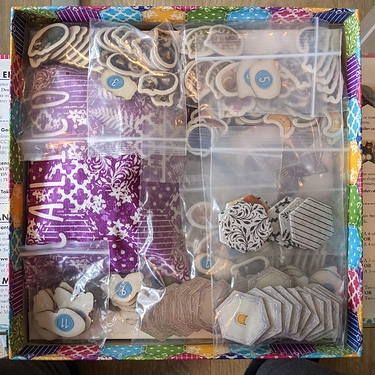 Behold. The insert was retained to keep the player boards reined in, and I put the kitties into their own little baggies. It sets up and tears down in about 2 minutes, and takes almost no consideration whatsoever to get the box stuffed and closed without any lift. /Chef’s kiss.

What did you decide? I have the deluxe Birmingham, tend to wage war on bad boxes (often downsizing them by painting smaller boxes for em), and absolutely would recommend the deluxe B:B. Yes you can get poker chips, but it’s hard to find really great-looking, great-feeling clay poker chips that don’t have at least a little ‘Vegas glitz!’ production design to them. The Iron Clays are tres classy. I got the extra set of them, denominations up to 500 or 1000, and now use them as counters for all manner of game.

One of my most satisfying reboxings was fitting Inis and the Seasons expansion into the expansion box with no lift. Got rid of that immense (though lovely) base crate. After getting too many coffin boxes, I’m more and more appreciating the “just fits” sizes. I’m also less and less completionism about having to get expansions.

Course, I also prefer inserts to baggies for everything. I like inserts that give each player all their starting pieces and resources in a table-ready container. The mental load of everyone trying to figure out which size bag to put everything back into at the end of the game is too much. Having in-game usable storage containers makes the biggest difference for my likelihood of getting a game out. So if that means a bigger box for a game I really like…

I get that. I squeezed Cyclades + Titans + Monuments into the Titans box. It’s satisfying to have the game and two expansions snugly fit into an expansion box. The only downside is that I’m the only one who can pack it away.

I decided to a) not buy Brass, and b) buy about 200 average quality poker chips in a more useful denomination spread in an aluminium case for about 30 dollars.

If I do ever buy Brass, it will certainly be the retail edition. I appreciate the brass clays are nice, and seriously considered buying a 200 chip set separately, but it seemed an unnecessary expense and virtually impossible to expand or customise the non-standard set afterwards.

I appreciate the brass clays are nice, and seriously considered buying a 200 chip set separately, but it seemed an unnecessary expense and virtually impossible to expand or customise the non-standard set afterwards.

I wonder. Roxley had an Iron Clay reprint KS campaign to help everyone fill out their sets and expand. I’m wondering if they would do this again in the future if enough people ask again. It might take a couple years for the current stock to run out.