Welcome to our 5 players of Shogun!
As pre-determined, our Players and their current player order are:
@HOLYWOLFMAN7
@lalunaverde
@Marx
@DJCT
@COMaestro

All players will be given their province cards. Your sample player boards with available armies to be placed looks like this: 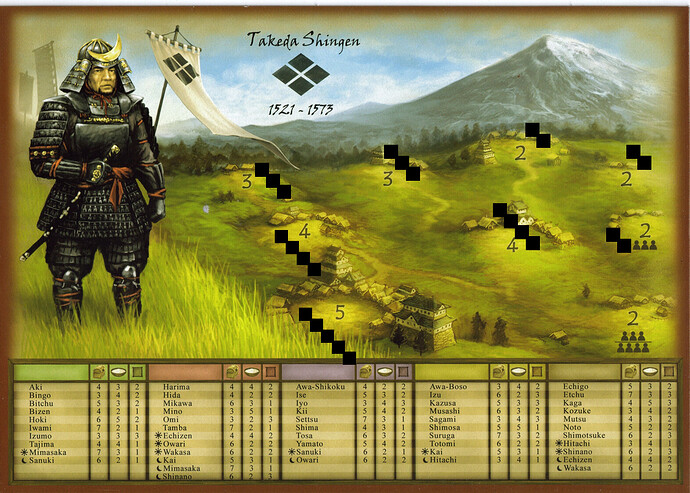 First player will look at their province cards and choose ONE SET of armies and place them on one of their provinces. (for example: 4 on Tosa)

Then the next player and so forth. This is the only part that might take awhile, and that is setting up the board. As you place your armies, be aware we are playing the expansion where a player gets a BONUS if they own a province in FOUR regions. So, it is highly beneficial for you to try and maintain hold of at least one province in 4 of the 5 regions on the board.

When ready, player 1 @HOLYWOLFMAN7 can begin his first placement.

A slight change. These are the provinces that were not allocated and are non-aligned. ie. They are open and can be conquered. All other provinces will belong to a player. 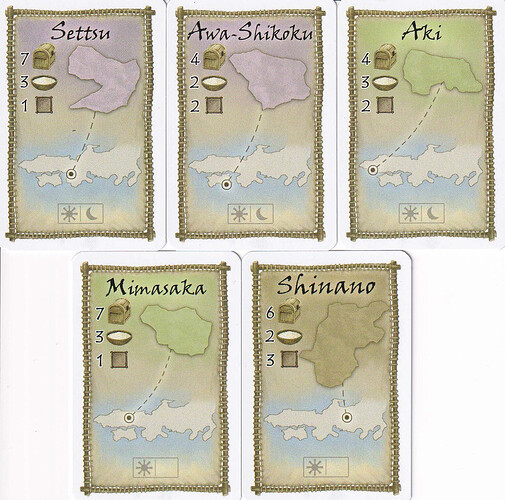 Okay, @HOLYWOLFMAN7 has texted me his first placement. As I explained to him, normally players will either use a small army or a large army. Sometimes placing your large army first will show where you intend to show strength, other times players like to use smaller armies so as not to divulge where their true strength will be. None the less, Nick has chosen “Shimotsuke 5” for his first placement.

@lalunaverde will be next… you will choose one province and then how many armies will be placed there.

If you do not care how others place and you know exactly how you wish to place your armies, you may also PLACE THEM ALL AT ONCE, and be done with the placement process if that is how you want to proceed. But for now, the following turn order is
@lalunaverde , @Marx , @DJCT , @COMaestro

you can place one or all your armies…

as a reminder… also place your General…

next up is @Marx

A reminder… each province will ONLY hold ONE set of armies… ie. don’t expect be be able to place more armies in a province that already has some. (This only pertains to setup).

2 armies on Izumo, please and thank you.

I like to deploy my Trojan horse right from the “get-go”! Lol

Interesting!.. That is a good one!

next up is @DJCT if anyone needs help, just go ahead and PM me…