I’ve decided I’ll be prepping and introducing my favorite board game Shogun (2006) by Dirk Henn and Queen Games. Recently brought this back to the table and we’ve been playing it. All the new players I’ve introduced it to have really loved it. Anyone here heard of or played it before? We will be using all the expansions. 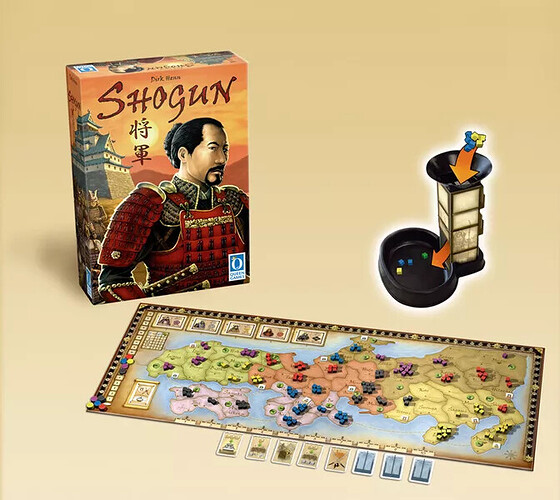 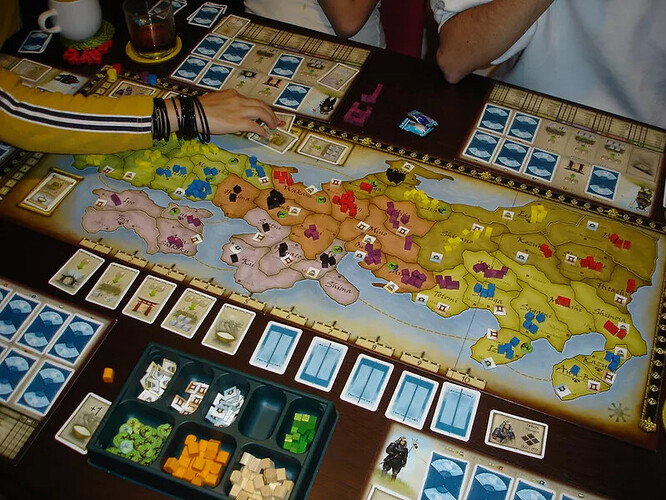 Love Shogun, but have never used any expansions, despite having Tenno’s Court.

I love Shogun, but I’ve heard nothing but blistering hatred for the expansions.

But gosh is the base game good. Started my entire love of “Wargames that aren’t wargames”, or I suppose “Games that look like wargames but are definitely not wargames.”

So good. And the tower! Oh, don’t even get me started on the tower.

We was skeptical as well… but after playing it we thought it was good. That is why I want to introduce all the expansions to you all. It gives a little bit of “extra” as well as a possible “commitment diversion”, when taking actions.
Basically:
Expansion#1, Tenno’s Court = makes use of extra armies as well as making players having to commit to that action (in the hopes of getting a good benefit)!
Expansion#2 = you must have a province in at least 4 regions to gain a reward!
Expansion#3, Military Leaders = gives a benefit of where the leader is as well as extra score benefit.
Expansion#4, Chambers = Gives extra scoring benefits if you own each region per round.

I’m almost ready with this, so I’d like to get those interested to become my first players! Looking for 5 volunteers!

I’d be willing to give it a try!

https://drive.google.com/file/d/1OhetUeJRZlGBOwn_ZoV1focuuiMH8gKA/view?usp=sharing
sample of how I’m thinking of doing the cube tower.
Let me know if you are able to view.

Many years ago when I was thinking of how to do this via PBF, I was tempted to use a math algorithm. But I think this might be better?

If people can see the videos, that seems fair enough. (With e.g. youtube the site can sometimes auto-embed, but Google files are a bit more “special” than that.)

There’s also Statistical Behavior of the Battle Tower | Shogun on BGG from which I think one could build* an algorithmic approach.

* for clarity: “from which I will be happy to build, if wanted”.

An algorithmic approach to the battle tower sounds terrific, in the Terry Pratchett sense of the word.

But I am happy to work with whatever makes the most sense and the most people confident.

Just finished playing an in-person 4 player game! Yes, we definitely want to get this game starting on the forums.

There’s also Statistical Behavior of the Battle Tower | Shogun on BGG from which I think one could build* an algorithmic approach.

Yes, please if you could build a mechanism, we would really appreciate it! But initially we would need it to be able to add cubes to the tower, as well as telling us what is in the tower. My goal is to be able to use both, however, the camera one will be primary and the algorithm one will be in testing phase so that we could see what would that drop result be as compared to the real on hand manual drop.
It would be interesting to compare.
We would need a five color variable (players) as well as one other for the Farmers. So six colors total.

In the meantime, still looking for more interested players!

testing how I can big I can get this map…

I think a PBF game of Shogun would be quick as compared to our other boardgames because once your actions are allocated, there are perhaps only 3 actions that might need player response?.. The other actions are almost automatic once executed.

Ah, what the heck. What’s another PBF game. I’m in. 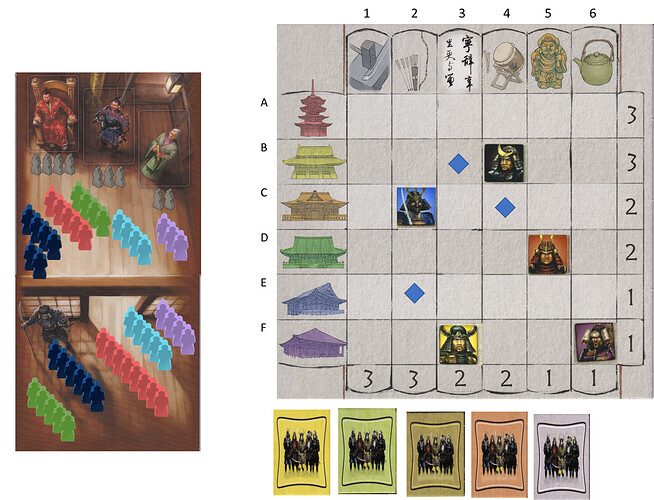 yes… I corrected the colors! 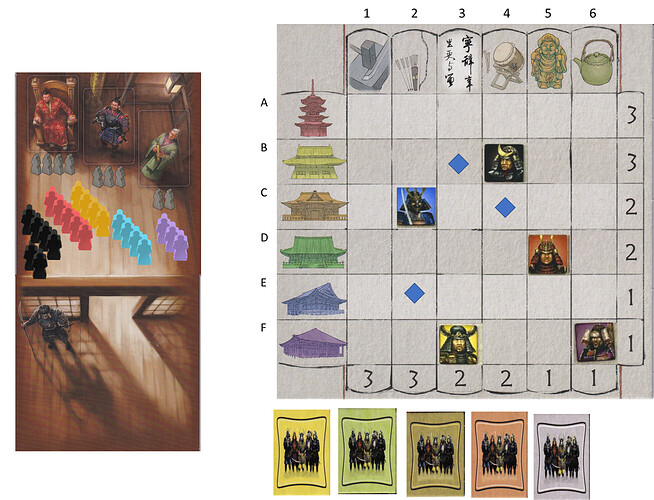 PROVINCE PICKING
All the cards will be separated by the 5 regions. Certain province cards are removed (1 from each).
(Shimosa, Shinano, Settsu, Tamba, Mimasaka)
Players (in turn order) will choose (secretly) 4 regions and they will get 2 random cards from each region. (if a region is depleted, the player will choose another)
A total of 8 groups of armies will be used in placement.
Then in turn order, players will proceed to the placement of army’s step. (And General)

EVENT RULES
There are 12 event cards. There will be 3 piles consisting of 4 event cards. 2 piles are “Event Piles” while the one remaining is “Winter Pile”.
For every round you draw 1 card from each pile: 2 event cards and 1 winter card.
Each round now has effect of 2 event cards (for ex. Castles + 1 defense and Max. 5 chests at the same time). If a situation occurs like min. and max. chests at the same time; the decisive is card from the higher pile.
Winter deck consists of 4 cards - as usual you have 25% of chance for each card to happen during winter. During normal seasons (spring, summer, autumn) they do nothing, only in winter the last card is taken under consideration.

The Theater Event card is modified: You may choose to remove 1 revolt marker from any province you have a theater when the card is revealed or wait until you build one in this turn (if you intend to).