Can verify. And it is annoying that it is not in the player aid.

Yes, it’s no more than another line on the turn actions…

I thought it wasn’t an option in Lancashire as it’s so well advertised in Birmingham.

We played 2 games of Troyes on BGA with @yashima. Not played it for a while (well, a month). It’s really, really good. I think 3 player is my preference but I love the bit of strategy, bit of tactics, bit of sharp elbows and not being able to do everything you want of it. Plus it plays in 45 minutes.

The only downside is it is a horrible to game to teach.

My second ever game of Sprawlopolis. I think I drew one of the more favourable combinations of scoring cards! 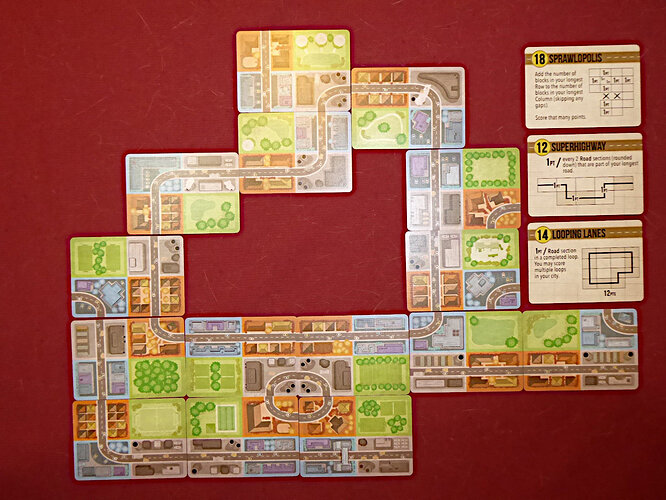 I wasn’t certain if a “road section” really meant per-block (it seemed like a lot of points, and the manual didn’t say), but the BGG forums claim that it is, so I make this:

Based on previous comments here, that would be a good score; so I probably shouldn’t be surprised if my second ever score remains my best for some time to come : )

Continuing with the wallet games, yesterday I played three games of Food Chain Island which I also enjoyed. You start with a randomised 4x4 grid of the 16 animal cards, and each turn a ‘predator’ card eats an adjacent ‘prey’ card by moving on top of its space, and you then perform the unique ability on that predator’s card (which frequently involves additional card movements). The goal is to end up with only one card remaining. The catch is that every card acts as predator to only the three cards ranked immediately below it (9 can eat 8,7,6 only); so you’re trying to manoeuvre things so that you’ll have at least one adjacent predator/prey pairing every single turn, while also trying not to allow any breaks in the food chain to occur. I found it to be a neat little puzzle.

I might have gotten a bit lucky here as well, as I won all three games, successfully getting all the way down to a single card in the first two games (both times using both sea creatures on my final move – these are one-time special abilities), and scraping over the line with the minimal win condition of three cards in the third game. I’m not sure whether I accidentally cheated, mind – I later realised I’d misinterpreted a couple of cards, but I couldn’t remember whether or not that had benefited me. In any case you can make the base game harder by removing one or both of the sea creatures, if you need more of a challenge!

The Friendly Waters expansion looks like a fun way to mix up the sea creature abilities.

The Tough Skies expansion just looks nasty! – I don’t think I’ll be playing with that anytime soon – although with both of those expansions you could easily mix things up with extra sea creatures to counter the aerial terror.

Played my first solo game of Firefly. I concur with the table hog opinions, I am not sure if I get any of the Khalidasa or Blue Sun expansions if I will be able to fit it in our table… 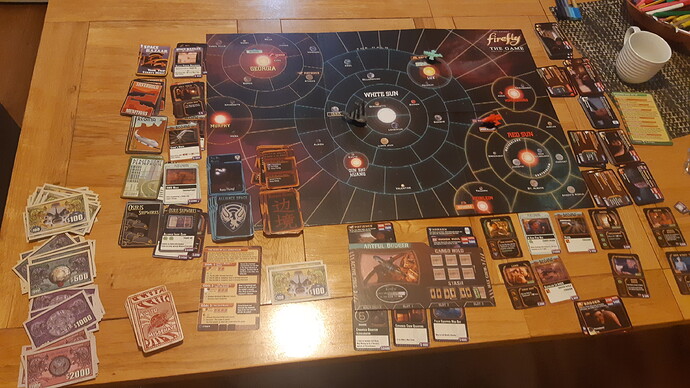 Great game, if I failed to achieve the goals in 20 turns. I got the King of Londinium story card, and getting to the money necessary for the first goal took me close to 14 turns. I extended to 30… and 40, only to get intercepted by the Reaver ship in the last planet (Boros) when I was about to fulfill the last goal with a very decent crew.

Cannot wait to take this with me to the next game night. I think this could become a favourite of mine very quickly. Such a simple game, but it lets you feel like a captain in the Verse finding your own way. Very happy to have purchased it.

Thanks @RogerBW for suggesting a PBF, nice discovery.

Thank you for teaching the most impatient of all the learners

It was fun to play this, I had been curious about Troyes for a long time and having played, I am even more sad about not clicking with Black Angel.

I would say that Troyes has a rather steep learning curve in 2 parts: first just the basic flow of the game, which I would say I now have a grasp of and secondly figuring out how to making points… which I have not figured out as evidenced by my second score being even lower than my first

For what it’s worth, Troyes doesn’t seem as good when playing on BGA as with the real game.

I’ve been feeling that way a lot recently, particularly when I revisited a pair of games I haven’t played for a while - Abyss and Splendor. I remember the thing everyone said about Splendor when it launched: those lovely heavy chips! (Also the box size, but I’ve mentioned that in a different thread.) Abyss has that gorgeous card art and the impractical but pleasant “pearls”. And on BGA it’s just… pixels and plinky noises.

But I hope that on Monday it’ll be warm enough for in-person masked games in the garden again.

Almost the same. I do kind of enjoy not having to set up or score 6 nimmt or 7 Wonders.

That said I played my first two handed solo of the physical copy of Beyond the Sun after playing 6 virtual games. I think the BGA implementation of the game is really good (better than Troyes) and I thought it played fast and with a nice flow… the physical game has even more of that. Turns are so fast and easy you don’t notice how time passes.

Scoring at the end is a hassle though.

I was also able to play with the advanced playerboards which mix up the strategies a bit more. There is one thing I like better in virtual: the size difference between the tree board and the space board is smaller on BGA and I think that it fits the importance of that game aspect better. The tree board is just too big.

Troyes on BGA would be hugely improved with an undo button.

Yes indeed; and with the ‘Sprawlopolis’ card as well, and essentially having no interest in the colours, overlapping seemed like it would be counterproductive for the most part. I considered it at the end while looking to see whether I could eliminate any more roads, but couldn’t find a way.

My first game had cards overlapping all over the place while I tried to maximise one of the goals, and it turned out miserably : ) (Not least because I paid no attention to roads at all in that game, and found I had something like 18 of them when it came time to score! I was consequently a bit amused when the game basically told me to think of nothing but roads in the next game : )

In most of my games I end up with 7 or 8 roads. In very very few I get below that and I try hard not to go above 10 those usually end with miserable scores

Ps I have also enjoyed my first games of Food Chain Island immensely.

Followed up with two games of Codenames. I lost one as spymaster due to my uninspired clues and won the second because the other team went for the assassin.

Coming to report that I still keep getting owned at Splendor by my better half. 4 games, 4 defeats. It is getting to the point where I am afraid of picking cards up because the replacement card is always either a free pick up or easy points for her…

Four colours are possible for specialisation. I need to see an Orange train.

That has to be seriously heard to pull off. The other trains can get to 100+, but to get there with orange… you’d need an orange at 11 or 12 of the 16 auctions and have the luck to get minimal 0s. Heroes make it easier, but orange always seem a bit rarer than the other colours

Hadrian’s Wall, I played a couple of solo games of this during the week. I haven’t broken out with others yet, but as a roll and write it plays pretty similarly solo as with other humans. It’s terrific, incredibly strong first impression, like competing now with Welcome to… for my favourite roll and write! It’s great - I’m not much of a solo gamer but it may tempt me to give it another crack this week.

Metro X, I did very well this run at this off of the back of scoring over 20 points of transfers. Lots of fun, easy to break out. The puzzle is difficult to see and its a little hard to plan ahead sometimes, but it’s a lot of fun.

Architects of the West Kingdom, first proper game of this - it was really really solid. Gameplay whips around the table and the worker capturing mechanic is a lot of fun. I won by one point on a strategy of building the heck out of the cathedral to another player who didn’t build any of the cathedral but focused on buildings and resources. So it’s well balanced between those two approaches. We didn’t play with virtue very much, a few of us got fairly high, no one ever got very low on the track though - it’d be interesting to see how that functions in future plays. But yeah, between this, Hadrian’s Wall and Raiders of Scythia, I’ve been very impressed with my foray into Garphill Games so far!

No Thanks, a couple of games of this, the second was rough - I think the winning score (the lowest score) was like 40 something.

Ticket to Ride: Switzerland, my wife joined us for a game of this, and smoked us with three country to country tickets. I had to check bgg afterwards, and apparently we have been playing those tickets wrong - you only score the highest connection, not all of them. She insists she would’ve won anyway and she might be right - she’s super good at Ticket to Ride for some reason. I can’t believe we’ve been playing Switzerland wrong all this time though! This is up there with my Modern Art rules snafu (only the most in demand artists each round score, the others are ignored).