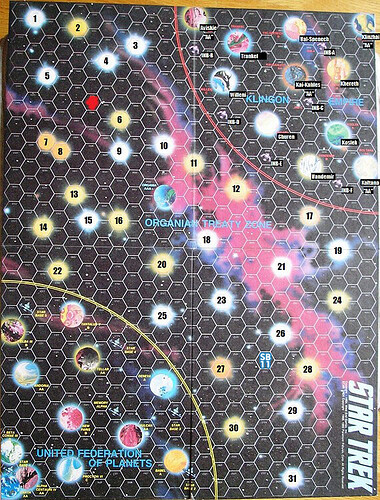 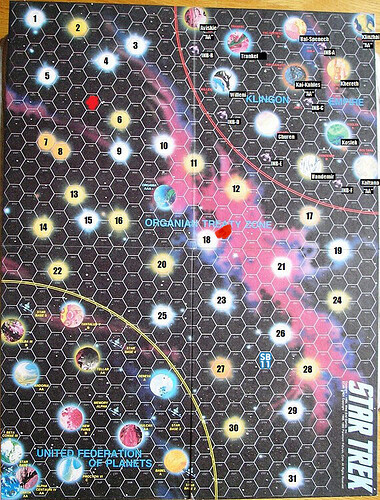 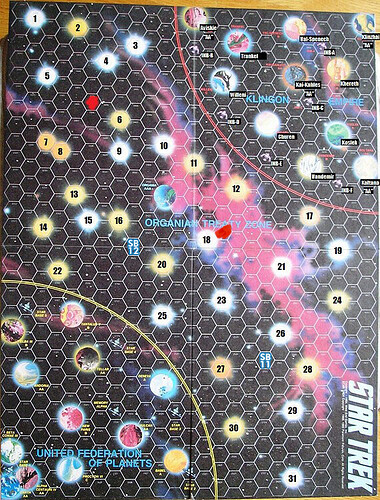 Sorry, I don’t really have a camera capable of taking pictures

and this was the best one I could get off BGG. I do have tokens though! 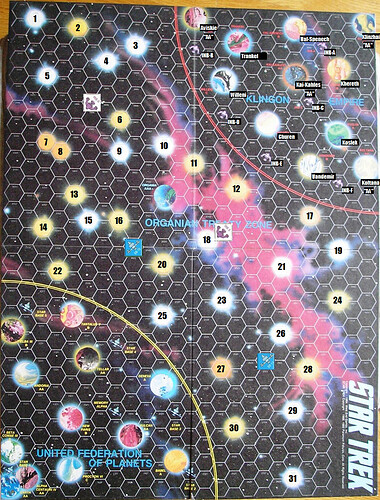 Next you’ll place your ships onto planets/stations in your home sectors.

And with these there’s no reason you can’t just plonk them all down at once, so go for it whenever.

Do we place (and can we move) ships on to the planets, or just in an adjacent hex to orbit them?

Can I place two on the same starbase?

You can! Or all of them!

Swift victory on star base B.

2 ships on star base E

Last ship on star base F

Okay, great! Next, you can assign your officers to the ships.

The various skills change what paragraph is read out, or give an optional paragraph on adventures. Generally, a diverse group will get a better conclusion.

You can put them all on the same ship, or split them up; though it should be noted that losing an entire ship with it’s crew is possible

(not that it’s every happened 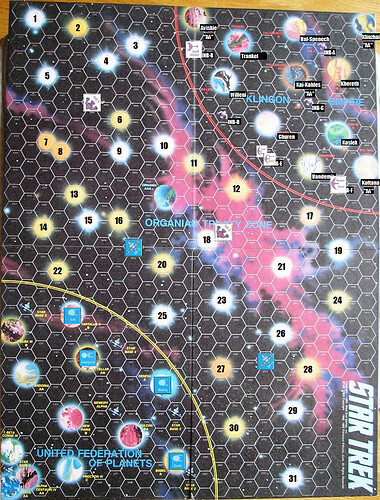 Forgot to mention, you can also (optionally) put Agents or Commissioners on your own ships. The Federation has 3 commissioners (Ferris, Fox and DiLucca (they’re all the same)); The Klingons have 2 remaining (secret) Agents.

These are primarily used to try to bump a planet’s political state towards the player. (Klingon Satellite<>Klingon inclined<>Neutral<>Federation Inclined<>Federation Member) Commissioners have a 1/2 chance of success, Agents have a 1/3, and there is always a 1/6 chance of bumping it the opposite direction.

Agents can also be used to 1) Assassinate a Commissioner or 2) Blow something up. There’s a lot of details about this, but it’s pretty much as you’d expect blowing something up to be. There is a 1/3 chance of success with any Agent action, and in either a success or total failure (1/6), the Agent is lost (though can be replaced).

However, putting Commissioners/Agents on your ships cause some problems;

With this in mind, it is generally best to keep such persons isolated on their own ships.

And yes, the two additional Agents would also be placed secretly via PM.

So, to confirm, Commissioners/Agents can fly solo and don’t need to travel on a bigger vessel?

No, they do need a ship. But they don’t need any other officers with them.

Bit of gut and gueswork, but I’ll assign the following:

Post Commissioner Fox to Starbase 4 (if that is possible)

I find it much easier to parse what your characters can do for some reason.

Okay! Setup is done! We now move into Turn One.

There are 10 turns, and each one consists of three main phases:

The player with the most Reputation goes first in each phase, with Political Track as the tiebreaker. (To start, Federation has initiative)

So @gmwhite999 may move any or all of their ships. A ship may move up to 12 hexes, and the distance determining the difficulty class of the check for dilithiums. You’ll then roll 2d6 for each ship that moved, and if the number rolled is lower than the distance moved, the dilithiums burn out. An engineer increases both the range and the roll by two.

Engage! (unless the Dilithium Crystals canne’ handle it!)