Okay, so! I was thinking about what games would be better on PBF than via digital implementation, and looking through my collection I saw this - a game that is old and ridiculous, that I’ve always wanted to play, but never have the right situation. So I’ve decided to take it here, and see what happens!

For those unfamiliar (basically everyone, I’d suppose) this was a game from 1985 based on the same “choose your own adventure” format as Tales of the Arabian Nights, but themed with The Original Series Star Trek! Most of the scenarios are from the series, but probably won’t turn out the same… especially if you’re playing the Klingons

So, with that said, I am looking for exactly two (2) humans or other sentient organisms to play as the United Federation of Planets, as well as the Klingon Empire. I will be the facilitator/GM, and manage the random events, paragraph book, etc. Players will be expected to check in once per day, though if you miss a day that isn’t a problem, real life comes first. (although I may decide the outcome for you if you are absent for several days). No prior knowledge of the game is required or expected, so come on in!

I am so up for this.

I’m curious about this too, although I’m sure others will be more keen to play than me. If not though, I’ll give it a shot - so consider me in reserve. Sounds to me a bit of the Birth of the Federation computer game, which I love but never sustained enough interest in to finish a game.

Okay, we’ve got two, and that’s the exact number we need! So here we go!

First off, do either of you have a preference towards being Klingon or Federation, @gmwhite999 and @RossM ?

No - but I will need to look up the rules and am away tonight so back online properly tomorrow evening.

Alright then, I will arbitrarily assign that 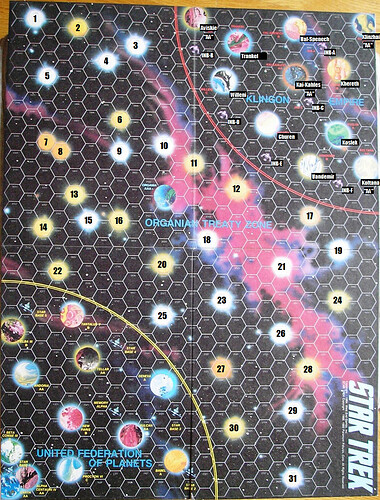 Here is the map, hopefully it’s readable? I’ve put numbers on the stars so that they can be readily identified. Also, if a space between them is referred to, it can be done using the six cardinal directions of space (N, NW, SW, S, SE, NE) and the distance from them. (eg, “2 SE of #18” would be in the pink smudge, by the tiny star that doesn’t exist.)

I had figured I’d just explain rules as we get to them, but if you want to read the rules you can; just be forewarned that the manual for this game is like a reading a tax bill

There are several score trackers, which I will be keeping track of; to start we have

(The Political track being what determines the winner)

Annoyingly, the next thing in setup is to place a Klingon Agent, which is the most convoluted thing in the game. Basically, it’s a hidden movement thing, where they might be able to jump out and do something. So @RossM may secretly assign one Klingon Agent to a Federation planet/Star Base via PM. (Probably one of the ones near the edge of the neutral zone would be more likely to have a ship at it)

Today is a good day to roll 2d6 and not run out of Dilithium.

The Empire would never be caught using spies. To do so would be most dishonourable.

Okay, next each player will place their Star Bases in the neutral zone:

They have to be in an empty space. Per my decision, they can be on the border of a home area, as long as the center of the hex is in the neutral zone.

These bases can be used for replacing:
-Dilithiums
-Redshirts (security officers)
-Commissioned Officers (not that anything bad would ever happen to any of them…)
-Agents/Commisioners
-Tribbles

The Empire would never be caught using spies. To do so would be most dishonourable.

“This is a diplomatic mission!”

Bear with me guys: even Federation Admirals have a night off for their birthday. Back tomorrow.

We have no spies. 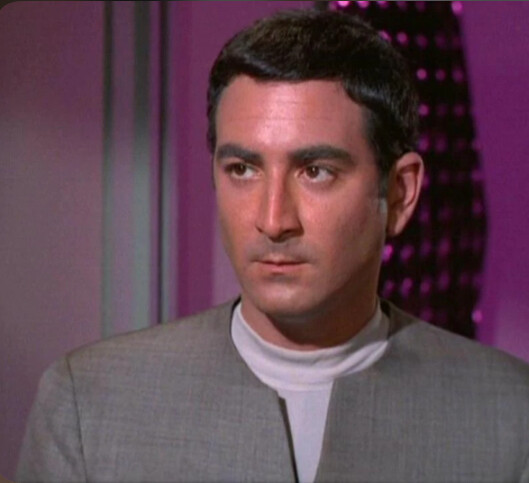 @GabrielH Starbases can be anywhere in the neutral zone?

Do we send you these secretly? Or take turns?

Supposed to take turns, but I’m gonna say you can do it simultaneously to save time.

It’s also noteworthy that a ship can go to an opponent’s base to change dilithiums, but will take one turn longer. 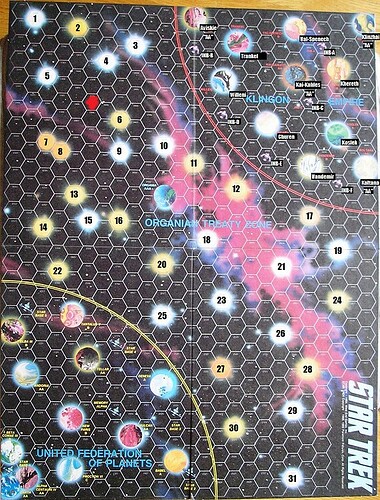 Just about getting back into things. Is there any significance in the pink cloud up the centre right of the board?

Nope! Nor is there significance in much of anything here

Really the only things that matter are 1) the numbered stars 2) the space stations 3) Organia and 4) the “AA” planets.

Just checking that it wasn’t a strange nebula or cloud that hinders movement or sensors.

Any chance of a larger size/resolution map going forward? Looking at where to put my first starbase but it looks like those are hex references listed on the board.