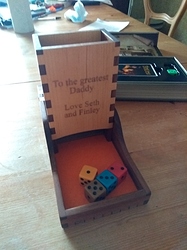 My understanding is to add the three best number of each rolls. So, using my home made dice roller, here’s what I got :
“Dice roller” gif !

It is not amazing, but I’ll keep it; I think we can do fun stuff with that.

What a helpful dice roller you have there! Very adorable

@Captbnut I think I worded things a little poorly! Your ability scores are made up of the three highest die out of the four rolled, but you can also roll the 6 rolls again and pick that set of rolls instead if you don’t like it!

That’s a relatively strong spread - no great strengths, but no weaknesses either. Even though I said that having low scores can be good - don’t feel like you need low scores! You can still role-play whatever kind of character that you want, your choices in the story make a larger difference than your scores in the end. Scores are just a great way to begin visualizing what kind of person your character is!

@Agemegos @Sagantine I’ve never set a character before so I thought it might make for a more interesting and fun experience to have a range of attributes, some good, some bad.

If you think it would be a more rewarding experience for me and the group to have higher attributes across the board I’m happy to follow your advice.

Not knowing your tastes, nor the GM’s style, nor anything about the intended content of the campaign, I cannot advise you.

I will go with my higher set of numbers then please

No, there’s nothing wrong with having some low scores - however, the way that D&D is designed means that scores that are too low become frustrating to play. It’s my bad for making that unclear, but it’s less ‘make sure you have bad scores’ but more like ‘don’t feel bad if you have one - it’s an opportunity’. A 6 is a little too low for an adventuring-type character, producing a -2 modifier. 0’s and -1’s are generally considered a low score - a 0 being 10-11, and a 8-9 being a -1.

Writing up the setting now… Stand by!

Welcome to GAMESU-ASHRU The Crystal Kingdom.

Ruled by the mysterious Etellu, the Crystal Kingdom is an ancient society on the brink of collapse. Reduced in size to a few states and island colonies, and surrounded by hungry and opportunistic feudal lords, the days when the known world was under their feet is long gone. The Etellu are waning in numbers, and their old mastery of Crystal Power is being challenged by new scientific discoveries among elven and dwarven scholars. On top of all this, the Great City Shamasu-Tashiltu was suddenly obliterated by an unimaginable catastrophe in which nearly a million people perished in an instant. The main population is now spread among a ring of provinces around the great wasteland that resulted from that disaster.

You can think of the Crystal Kingdom as having a blend of ancient and medieval culture. The regular people are living much closer to the medieval standard of life especially as the cultural influence of their rulers has greatly diminished, and the Kingdom became extremely cosmopolitan. The ruling ‘class’ which is made up of members of a nearly extinct race of elf-like beings are culturally similar to an ancient monarchy. The normal people speak ‘common’ which for our purposes is english, and all of the long place names that I’ve been using will have common-language equivalents - you don’t have to remember all the long names, but it will increase your immersion if you use them! The Royals speak a long extinct language, which your characters can choose as a bonus language in character creation, if you like.

You live in the northernmost province, Bet-Suripi which abuts the barbaric societies of the cold lands. The population is mostly human and dwarven, though all races are relatively widespread in the Kingdom. Bet-Suripi is one of the least important provinces by numbers and wealth in the larger Kingdom, and is ruled by the least important Royal, named Shikka-Rubutu. She is called the youngest of the Etellu, though she is several thousand years old at least.

You all have lived in Bet-Suripi’s capital Hurshanu for at least since your pre-teen years, when you were selected to become one of Shikka-Rubutu’s companions. You have been raised in the palace together, have received the best in education, and are a combo of personal friend/servant/project of Shikka herself (with a lot of boundaries, though a reasonable amount of freedom). This is a practice that the Etellu have been doing since time immemorial, so there are about 50 companions in Shikka’s retinue. You have shown a different kind of aptitude than the others, and Shikka has directed your education towards a set of skills that will be useful in more than just courtly conversations, as she sets her sights in the direction of the wastelands…

So now we know the basics: you are a companion of a ruler, and you have been raised to become an adventurer. Also, you are already at least familiar with each other, if not more than familiar (rivals/friends/lovers??/best buds/I respect you but don’t understand you/whatever). As we go through the creation process together, we’ll establish these relationships.

The rest of your character is up to you! I’ve nailed down one piece of the world, and its internal logic, but 99% of the other details are freeform and feel free to make up places, people, events, etc. in order to flesh out your backstory. If they happen to clash with a specific thing I’ve already thought of, I may tweak it a little, but in general feel free to be creative. If you don’t want to think up names of places or people, just leave 'em blank and I’ll make it up - i.e. “I come from ______ in the North, the chieftain’s daughter of the _______ Tribe of half-orcs.”

All the D&D races are allowed, but they will have different cultures in this setting. Pick the one you think is coolest and I’ll tell you what’s different to the basics of D&D.

Some questions to answer, or think about while you contemplate your character backstory:

These are just a suggestion to think through… I may add more later?
Let me know if you have any questions or are stuck on anything.

I just realized that I didn’t really make this clear:

Think of the Royal Culture as Fantasy Ancient Babylon with Super Magic.
Think of everyone else’s culture as Normal Medieval Fantasy that has been struggling to get out from under Super Magic Babylon for a long time.

My name is Salazar ‘Lucky’ Wainwright.

I am a strange creature to look upon and my birth parents are unknown. The rumours since childhood is that I am the result of an illegitimate relationship between a Elf and a human. All I know is that I get this strange tingling sensation sometimes when something is about to happen. I can never focus on these sensations. It’s led me to gamble more than I should and you reach me on a downturn. ‘Lucky’? Not right now.

I was found as a toddler by my kind parents. I was a street urchin and they were unable to have children of their own. I was raised on the family farm in the harsh, northern lands of Duruk. My sense of danger allowed me to keep my flock of sheep safe from predators. I came to the attention of Shikka at one of her famous tournaments, I won the shepherding contest at the age of 13.

My parents knew I could be special and were happy that becoming close to the court could give me access to education and to a chance of great things.

I fell out of the military academy as I couldn’t take the harsh rules and discipline. Shikka rescued me from obscurity but I now hang on the edges of court, looking to make my move back to the centre. I’m generous with time and money, the life and soul of a party until I have too much to drink (which happens too often these days). Gambling has given me some dark acquaintances, but that tingling has kept me out of too much trouble. I’ve just hit 30. Too old to be the next big thing, but too young to be written off.

Disclaimer: I’ve never played before, nor created a character and backstory, so if anything doesn’t mesh with the world, culture or race, please let me know. I’ve done some reading and hope this is okay:

My name is Poot ‘Oddsocks’ Threetotter, I’m a Gnome and I come from Gnoidea in the North-East. (fun fact: when the village of Gnoidea was founded, the elder Gnomes had random ballot to decide the name. One of them, having drunk too much and up for some mischief, wrote ‘Gno Idea’ on his slip and it was drawn. Sticklers for obeying the rules, they stuck to the name and insist to this day that it’s pronounced Noy-dee-ah).

I’m the youngest of 3 childen. My parents and older siblings made tools, inventions and machines, creations of bronze, steel and alchemy, which they used to keep industry running in the village. I was always one for experimenting and tinkering, mixing the things I could lay my hands on in the workshop to see what they do. I was told not to, but curiosity always got the better of me, and got me in trouble more times than I can remember. Until that fateful day when combining the contents of my father’s ‘catalysts’ cupboard and some of the more exotic items in the workshop, I might have blown the roof off our hillside burrow, and created the proverbial ‘smoking hole in the ground’.

My parents were patient, but it only went so far, so when my mother learned of a ‘wonderful opportunity’ at the court of Shikka-Rubutu (my family had crafted a lot of equipment for the court and she wanted to repay their hard work somehow), to help build her standing with the Etellu and raise the profile of the province. So I was unceremoniously inducted into her throng within a week. I understand the rest of the village helped build the family a new burrow, and some sort of celebration was organised when I left - probably in celebration of my success I reckon.

So here I am now. I live in the Palace and have a nice workshop (in an extremity of the East wing, for some reason) and I’m just happy to be tinkering, creating and finding out what makes the world tick. More recently Her Majesty (she doesn’t like me calling her that, but tradition is tradition as far as I’m concerned) has had me working on potions, salves and smaller devices that can be carried in a backpack, so I think something is in the offing, but I’m not sure what yet. I get on well with everyone in the palace I like to think, but I especially enjoy the company of the Gnomes and Dwarves, and we share our ideas on alchemy, magic and engineering. I miss my family sometimes, but home is wherever you trim your beard, and my new family here are good to me.

It’s a pleasure to meet you properly Poot. Although your right trouser pocket seems to be on fire