I am wondering if I can do the following.
The dragon attacks me if I move from an adjacent hex to another adjacent hex.

Now I have Song of Wind… powered with white mana from the source this reduces movements on the plains to cost 0 and gives me two movement. So in my theory I could zig-zag around the dragon moving away from it and toward it on the plains twice to get to the hex adjacent to the green crystal mine. Secret Paths (my skill) gives me +1 move so I have 3 move and could move onto the crystal mine.

If I cannot do what I proposed, I will stay put and just discard Song of Wind.

You are correct about the move costs. That ends your turn? 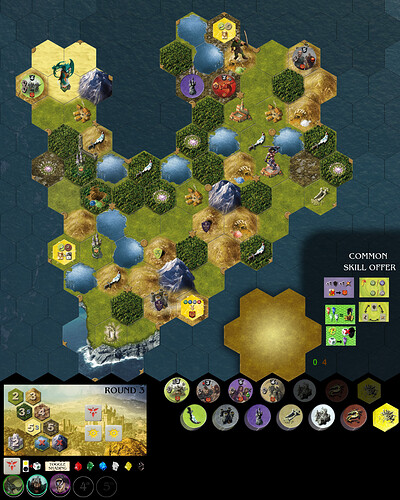 r3t2002map2879×3593 2.73 MB
The keep defenders are revealed to be thugs. Brutal attack for double damage, and they are worth +1 reputation if defeated (cancelling out the -1 for assaulting the keep in the first place).

White rolls to white. @Marx is up.

That dragon is Unfortified, correct?

If I am correct about that:
Tirelessness fuelled by a Gold mana die for Move 4, and to move up next to it and provoke the big lizard by standing on the Monastery.

Illuisionists fuelled by a white crystal to prevent it from attacking. Commence laughing maniacially.
Northern Monks plus a blue crystal for Attack 4.

Rage plus a red crystal for Attack 4.
Improvisation and discard March for Attack 5.
My skill for +2 Attack. That should be Attack 15, enough to slay the foul snake.

Northern Monks for Block 3, and then Rage plus a red crystal and discard Swift Reflexes for the Attack 5 and victory.

(But slaying the dragon is my preference)

The dragon is not fortified. I’m just not sure you have the attack right?

Northern Monks is ice attack 4, so you need 3 more attack. But you play 11/2=5, which is 2 more than you need. 6 physical attack would suffice.

Ah! I thought you had to use all one type of attack or it defaults to “Attack” (ie: I needed 7 Ice Attack, or it just reverts to regular Attacks).

In that case, I will hold onto Rage and just play Improvisation and discard March for 5, and then my skill for +2 to beat up the dragon.

You didn’t specify spending a red crystal on Improvisation, but I’m assuming that was understood to be the case. 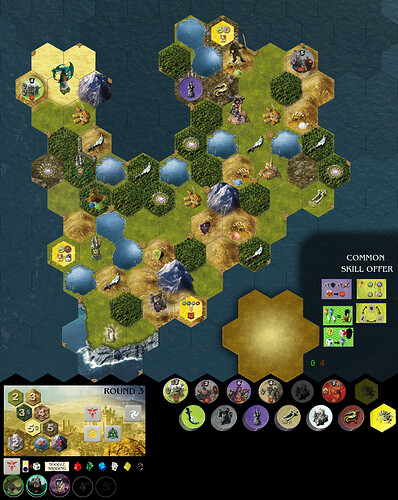 Meanwhile, @Marx , you have the following choices for skill and AA:

I think I will take Glittering Horde and Chivalry, please and thank you.

Not an option. If you take a skill from the common offer, you must take Blood Ritual.

Gotcha, sorry. I thought that was just for Source Freeze. Apologies.

I’ll take a Refreshing Bath and Chivalry, then, if that’s okay.

I think I want to save the rest of my cards so I’ll leave it at that for this turn. Not very exciting but I suppose it got me somewhere! Done for now. 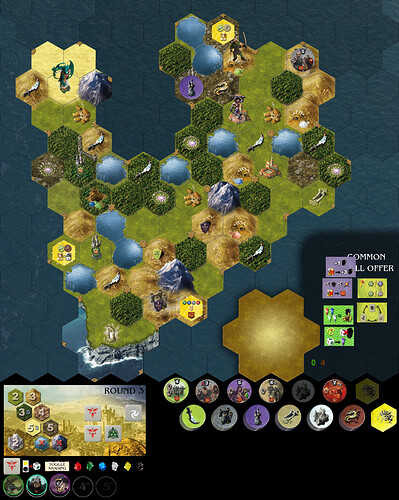 What is that yellow marker next to me. Can I go there? If not there, I think I might just go for the fortress.

It’s a ruin in a swamp. If you are on the hex, you can explore the ruin: face an orc unit and a monster, get an artifact reward.

Bit late in the game to be introducing this, but it’s worth considering now that everyone appears to be up to speed: 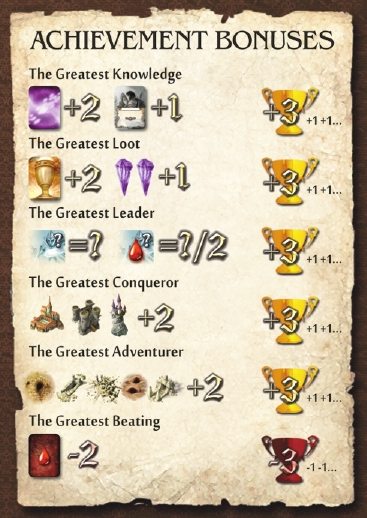 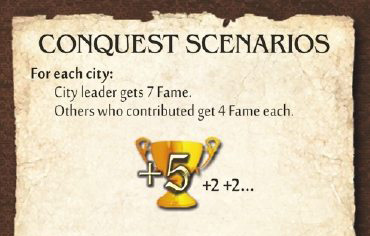 The +3/+5 trophies are for the winner in each category.

Or, in other words, you get bonuses for just about everything, except rampaging orcs and dragons.