No Thanks - A Card Game For Everyone Despite his inexplicably clammy hands.

Seriously, who’s playing this game without just opening their hand to inspect how many tokens they have?!

In case anyone here hadn’t seen this already, some other editions of this game come with attractive artwork: 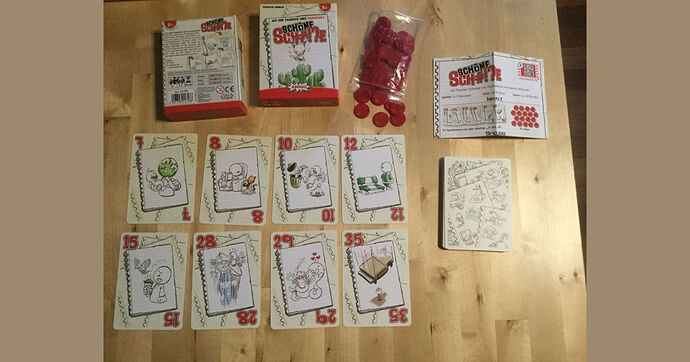 The game is language-independent and a print-out of the rules is tiny, so don’t worry about importing a version in another language if you want the pretty pictures.

I have that version entirely because I like the art better

And also that version is called “Pretty shitty” instead of No Thanks. Though I am guessing that played no role at all?

This was a great review. Tom is just knocking it out of the park again and again.

Tom is seriously amazing at reviews.

I played No Thanks in the pub for the first time, and it did the thing that I’m recognising gets me very excited about a game: had everyone understand not just the rules in 5 seconds, but the shape of the game in 10 seconds. The slowly-dwindling collection of counters, the threat you pose to other players whether you pass or take… instant fun.

Don’t know if you guys have seen this, but the great Tom Scott has played this! I was about to do the very same thing : )

It came up in the Which way do you go? thread, but definitely should be here as well.

The bit at the end with the tin of baked beans

Was somewhat disappointed that he never addressed the real question, however; Does No Thanks hold up against For Sale? This came up in Podcast #163, where Tom and Ava sided with No Thanks, but Quinns with For Sale, but Quinns was the only one who’d actually played both.

Of course, I already know that For Sale skunks No Thanks any day, but I just wanted to be vindicated in my correct opinions

I’d take No Thanks over For Sale, although I’d happily play either.