Modern board games to replace classics 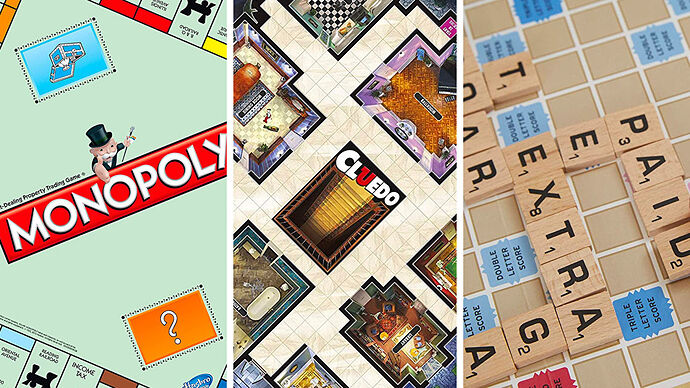 The best modern alternatives to replace classic board games

Swap out board game classics Monopoly, Cluedo and Scrabble for these fresh tabletop experiences.

They have one of my standard examples, Clue/Cluedo → Mysterium, but not the other, Battleship → Captain Sonar. Any more that ought to be in one’s vocabulary? For that matter, what other “classic” games that the general public has heard of are out there? Hmm… Operation → Men at Work or other dexterity games?

Being slightly crueller and more modern, Carcassonne → Isle of Skye or Cacao, which offer similar complexity but don’t outstay their welcome (or maybe that’s just me).

Monopoly →Catan or Aquire, or For Sale, or in a pinch Monopoly Deal
Clue → Mysterium Park, or Sherlock 13
Game of Life→ High Society or Camel Up or Machi Koro
Battleship → Captain Sonar or Love Letter
Operation → Flick 'em Up or Ice Cool or Rail Pass
Risk → Smallworld or Tsuro or King of Tokyo
Sequence → Kingdomino or Codenames
Scrabble → Qwirkle or Paperback/Hardback or Knitwit
Trivial Pursuit → Wits & Wagers or Geek Out
Charades → Concept or Monikers or Times Up
Rummykup/Rummikub → The Crew or Sushi Go or Hanabi
Munchkin → Dungeon Mayhem or Boss Monster or Illusion

(Aside: Sidereal Confluence as a replacement for Monopoly!? Oh no…)

What would people’s replacement games be for:

Stratego (although this probably doesn’t need replacing)
Risk (come on, there must be a big map armies game that is CONSIDERABLY more fun)
Othello

I will keep saying this:

It’s bloody monopoly with roll to move taken out!!!

Stratego would probably be Onitama, Cairn, or Hive… if you want the hidden/sneaky part of it then I’d probably recommend Coup or Dead Last, although not for two players.

Risk is usually killed by Smallworld, but you can also use Cyclades, or Kemet as good wargames (I usually hold off recommending Inis or Root for more advanced players)

Terrible at memory games here so that’s the part of it that’s stuck with me; maybe a hidden-movement game? Or Onitama as Marx said.

I think I would go with Lords of Vegas or Chinatown for a Monopoly replacement, out of games I have played.

Though out of print at this point, I always felt Mystery of the Abbey was the best Clue replacement, very similar in theme but with mechanics which made a better game.

Small World is a good alternative for Risk, but I would put Z-Man’s History of the World forward.

Small World is a good alternative for Risk , but I would put Z-Man’s History of the World forward.

I would also suggest 878 Vikings: Invasion of England, which still has loads of dice and simple rules, but it’s a way more fun that Risk.

How about War of the Ring?
Seeing a LOT of Kemet in answer to this.

Wait, there’s a Mass Effect Risk and people like it?!
(Edit: Looks at prices. Oooh, that’s why I haven’t heard of it.)

Sidereal Confluence as a replacement for Monopoly !? Oh no…

Even though I absolutely love it, based on the context in which most people play Monopoly I think Sidereal Confluence is a terrible recommendation.

I’m going to throw in Awkward Guests as a Cluedo alternative. I always describe it to people as “Cluedo with the dice removed”.

I feel like these topics miss some of which what makes monopoly perpetually successful and that’s that they’re inside the background culture.

I think if we approach this not from a mechanisms point then we can find some different answers. For example something like Villanous has a good shot because its the “Disney Baddies game”.

Also like it or not I think we have a few that do exist, like Catan and Ticket to Ride. You need things that people have a sense of before they’ve actually played them. I think pandemic fits there.

Basically I don’t think you can conjure up these games, they sort of create themselves through gaining a certain amount of permanence in the culture.

Well, that’s the thing, isn’t it? People play Monopoly because they aren’t boardgamers, they don’t know people who are boardgamers, and they do know that Monopoly is out there even though nobody really seems to enjoy it much.

“Hello! We’re here for some game recommendations.”
“Happy to help! Can you name a few games your family has played in the past that you’ve really enjoyed?”
“Sure! We love playing Monopoly and Risk!”

(Insert record scratch)
See, what people mean when they say this 99.98% of the time is that they have had fun with their family, and Monopoly or Risk (or Clue or whatever) were on the table at the time. They haven’t had fun “with” the game, they have very fond memories of being together with people they love, and the excuse to do that was a game that they all probably had a miserable time with… but they don’t know that. They just know when Monopoly comes out, everyone gets to sit at the table for 3-7 hours. And that can be nice!

But it’s very hard to explain that to customers. People don’t like being told they’re wrong, especially about subjective things (“What do you mean I don’t like Monopoly!? You weren’t there!”), and so finding a way to open the possibility that the game itself can be fun, and that you will want to pull it out more often because you enjoy the entire aspect of it… tough sell. And the biggest hurdle is almost always complexity, and not “real” complexity but perceived complexity.

Some people think Risk is complicated. What they mean is that it’s long and has several rules that just don’t make sense (the cards). But crossing the bridge from stuff like Risk, Monopoly, and Clue over to unquestionably better games like Catan, Ticket to Ride, or Carcassonne can feel overwhelming.

For the people that dig in their heels and refuse to open up to Euros, the recommendations are almost always the same: Five Crowns, Sequence, Rummikub, Qwirkle, Bohnanza, and Codenames.

For people willing to go a little more complicated, but not much, then we go Kingdomino, Hanabi, Coup, Love Letter, or Cockroach Poker Royal.

And for the people willing to give it a go, Catan, Carcassonne, Ticket to Ride, Splendor, Azul, and Sagrada.

I normally also give them the “This game won the Spiel das Jahres, literally translating to ‘Game of the Year’ award. There are hundreds of board game awards and all of them are meaningless except this one. Doesn’t mean it’s the greatest game of all time, but they are almost always bright, colourful, elegant, enormously replayable, and fun!” speech, so that if I’m not around next time and they enjoyed Kingdomino and/or Codenames, they know what to look for next time.

"I’m sorry, sir, but you don’t actually like Monopoly. Now let me check and see what else we have here that you can make up house rules in the middle of the game in order to cheat your way to victory…

Ah, yes, here we go: Betrayal at House on the Hill; I think you’ll love it. It stays on your table too long and the rules drastically change halfway through the game (or at the very end of the game, if you’re lucky)."

“Hello! We’re here for some game recommendations.”
“Happy to help! Can you name a few games your family has played in the past that you’ve really enjoyed?”
“Sure! We love playing Monopoly and Risk!”

Almost the same thing has happened to me (I’ve worked at a few beer festivals):

“Hello! I’d like to try some beer.”
“Happy to help! Can you name a few beers you enjoy?”
“Er… just give me the strongest you’ve got!”

“Of course! Zima and Smirnoff Ice!”

How much do you think this is due to jewels and glass being shiny?

I suspect a LOT of people would go straight to Everdell if they saw it laid out on a table. Same for Santorini, people see it and they want to play it.

Do customers get less nervous about complexity if a game has good table presence?

In my experience, most people are willing to play through just about anything if guided. The friction / barrier-to-entry for most people is that they abhor learning new rules / rulesets.

And if you are going to send a bunch of “non hobby gamers” off with a shiny new game, the biggest factor for that game’s components being taking out of shrinkwrap or possibly even the cards being shuffled is how much shock is involved in opening up the rulebook.

I’ve gifted a few games before and, in the case of “non-gamers” where I’m not available to teach The Teach, I usually just say “there’s a youtube video you can watch to learn how to play”

A lot of people ask for “What’s the most popular game you’ve got?”
To which I always wink and ask “Do you want popular, or do you want good?”

A lot of customers want Everdell or Wingspan because of how beautiful they are. And that’s fine! They are absolutely beautiful games. I normally say that it doesn’t matter how I feel about those games because they will sell no matter what I think (like Exploding Kittens), and if they think they might want either then they should buy it, since we’ll be sold out in a day and then won’t get them back for 6 months.

Par example, we received 54 copies of Wingspan last Tuesday (8 days ago now?). We were closed for Sunday and Monday (Ontario had a civic holiday on Monday), we are now down to 38 copies of it remaining. If we’re lucky, it will last the month, but probably not, and if we are really lucky we will get more copies before Christmas, but probably not.

Splendor, Azul, and Sagrada all have the advantage that they look beautiful and there aren’t that many bits and bobs. Putting out the board for Ticket to Ride looks a little overwhelming, and then there are stacks of cards, and routes, and little plastic bits… in Splendor, you have these lovely stacks of gemstones that everyone wants to touch, a market of bright, colourful cards that everyone kinda already understands, and… that’s it. Huge bonus.