So, for those unaware, several years ago a game came out using a popular Scandinavian building toy to create little robots that you would then play a little miniature combat game with. But I was playing WarMachine with beautiful stompy robots already and so I passed it by. But it was basically LEGO-Gundam, and it got quite a following (apparently).

Then the creator decided, hey, you know what Gundams are always blowing up? Spaceships. So he/she/they created a Kickstarter to fund a sequel: Mobile Frame Zero Intercept Orbit.

And it uses LEGO to build spaceships, and I was 100% on board. Kickstarted the HECK outta that… and then never played it because, in a stroke of generous stupidity, I gave all my LEGO to my niece (technically, my partner gave all my LEGO to her niece, but Adela was super appreciative and such is life sometimes). So I had to wait until I recollected a bunch of LEGO to play…

And today was the day! I finally sat down and decided to build the first ship from the “shipyard” in the back of the book (for the record, you’re allowed to build your ships anyway you want, as long as it’s on the right sized base-plate and you identify the weapons and systems it has).

Here are the results of that first effort: 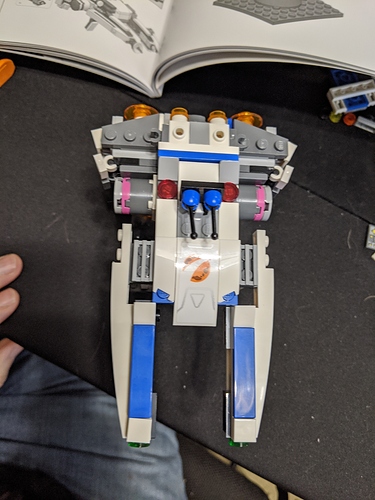 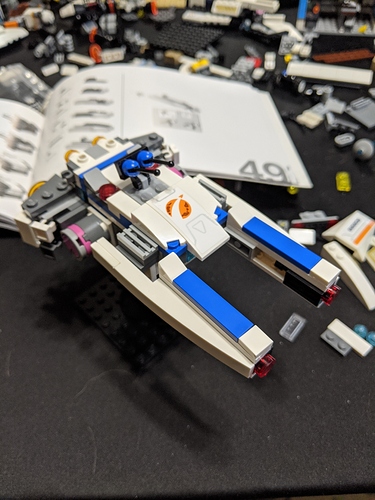 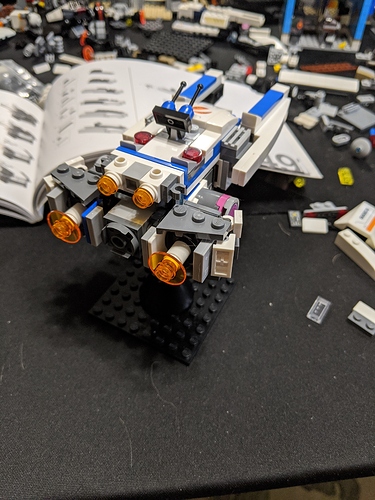 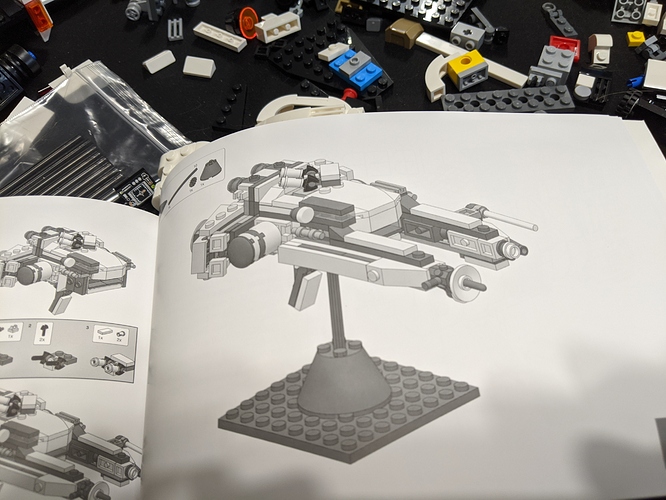 You will note that the end result ship… doesn’t look exactly right. Or super close at all, really.
In my defense, the guy who designed the ships obviously did so digitally, since a bunch of the pieces are extremely hard to find, or he casually uses pieces 20x that you get, at most, 2 in a set.

Still, I think the end result turned out pretty okay. Certainly more symmetrical than the Intercept Orbit “official” ship, but I’m okay with that. I like symmetry. I’m also not super fussed about the colours (there are a few pink pieces in there from a LEGO D-Va set I have), but I think the end result kinda… works.

Anyway. Who knows when/if I’ll get a chance to actually 2nd-tier play the game (rather than just building the ships!), but I’ll do my best to show off the ships as I build them here.

And of course anyone who has any desire to show off their own LEGO building skills, or to give me recommendations/suggestions (other than Brick Link, which I am familiar with but rarely have the patience/budget to get too much from), please feel free to chime in!

Pink is a good hi-vis colour when you’re working with grey and black and white a lot. Clearly the pink highlights are to help the dockyard crews.

I also backed that KS! A lot of the chatter on their pages was how to get lots of the hard to find pieces, as you said, and I never got to tier-1 because I would need to figure out how to get the pieces needed.

Edit: Thank goodness for searchable email archives, I can found and re-downloaded the Intercept Zero PDF.

I always liked this idea, just waiting for the government to change their advice to;

Go to your parents house to get a crate of lego > Control the Virus > Save lives.

But I don’t think that’s going to happen until Thursday.

It’s stuff like this that gets them banned from the O-Club. 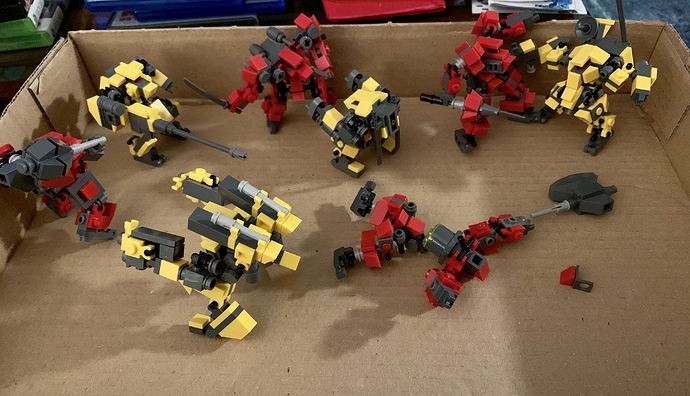 Dude! Those are amazing!
Have you actually played MFZ? Is it any good? There are Mobile Frames available in MFZ:IO as well, although they behave like fighter squadrons now (which makes sense?).

I’m honestly not sure how I feel about their inclusion in the game (especially since I haven’t actually played it yet!). On the one hand, it would be disingenuous not to include them, since fighter-craft absolutely dominate modern naval warfare and it’s a reasonable extrapolation that they will continue to do so in space. On the other hand, I really like pre-fighter-era ship warfare the best thematically… give me Battlefleet Gothic or Age of Sails or even Star Wars Armada (although the fighters in SW:A can be a significant factor, they have capped point-maximums, which means you have to field big ships and usually your capital ships dominate the field… usually).

Plus, the Mobile Frames in MFZ:IO are tiny and look very fiddly to build (but, again, haven’t tried yet).

Finished another ship this morning, but I can’t get to the base-plates without dumping out the whole bin of LEGO I have, and since my partner works in the same space I build in (the game room has been converted into office space since it has the largest table)… I’d probably better wait until she’s not working before I do that. She can get… touchy… about me playing while she works.

4 posts were split to a new topic: Space Fighters: Threat or Menace?

Have you found a source of Intercept Orbit builds/instructions besides those in the KS book? I can find plenty of mech frames for MFZ, but spaceship instructions are harder to find.

Intercept Orbit builds/instructions besides those in the KS book?

There are a few on the official MFZ forum (link-linky-link), but they’re not really instructions so much as “lookit this awesome thing I did”.

Which, cool, some of them are pretty awesome. But utility… not so much.

Anyway, here’s that ship I finished earlier today, finally on its base (which, technically, is the wrong size, but I’ll fix that tomorrow as I continue to organize my LEGO and build neat stuff!). 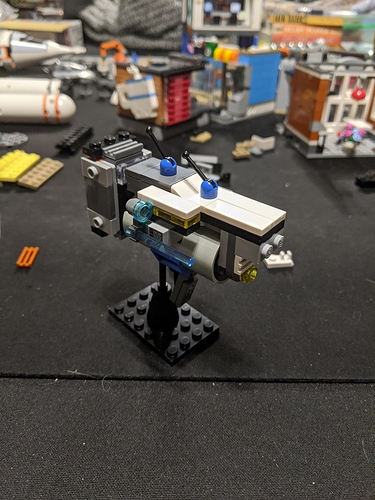 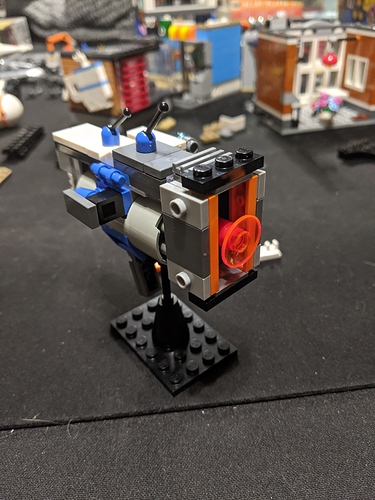 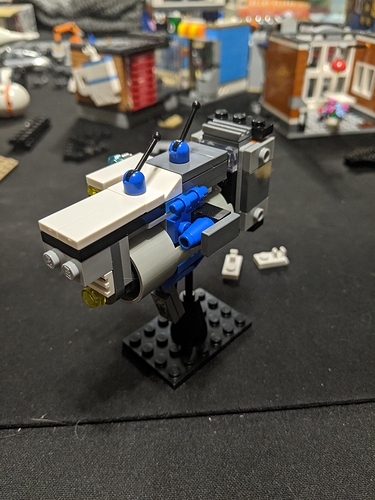 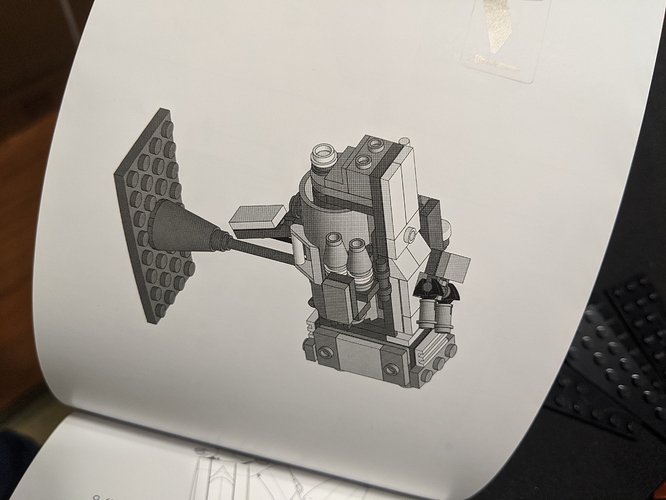 I don’t know about those two orange pieces near the engines. I wanted it to kinda look “glow”-y, like the engine housing was hot, but I don’t think it really works. I’ll probably swap them out for dark-gray tomorrow when I switch the base. It’s too bad I couldn’t connect the top piece to the back, I think it would’ve added a lot of stability, but I need an L piece that’s a receptor, and I don’t have any that I can find. They seem to be quite rare these days (they used to be rather common in older sets, as memory serves). Oh well.

Two down… four more to go, I think? There’s abouts.

I like the orange, if it helps. Maybe as Health and Safety warning for mechanics?

Alas, no. These fearsome combatants bide their time guarding a shelf full of paperbacks in my spare room. A room now so full of junk that it should be renamed “Hoarder’s Corner”. Regardless, I like the idea of spaceship combat better than giant impractical anthropomorphic fighting machines anyway. As a youngster, I would invariably repurpose my Lego sets to microscale spacecraft, so it’s funny to think that I was training myself for work at the “Lego Orbital Construction Yards” all along.

I’m at work right now, but I will post some of my past creations for your perusal later (the ships I have built are too large for convenient gameplay I think, but the scale is about right).

Here you go. Pardon the grime on them, but they were encased in dust from when I tossed them in a box from my move a few years ago. I Swiffered them as best I could, but they require further cleaning that I’m not inclined to do right now.

The first is a sleek “Bird-of-Prey” style mothership that carries two parasite fast attack corvettes under its main armament cooling vane “wings”. I sort of conceived these as a secret project by hard-pressed guerrilla separatists that had the resources to build a single formidable warship that could take on their numerous enemies on an equal footing. Sort of like “Da Beltahz” from The Expanse. 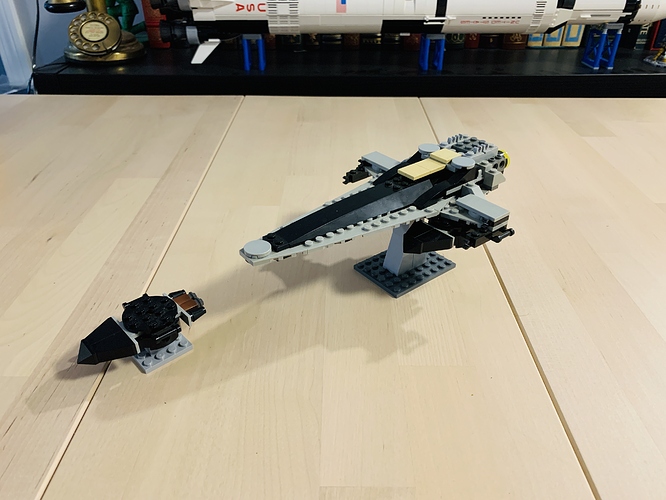 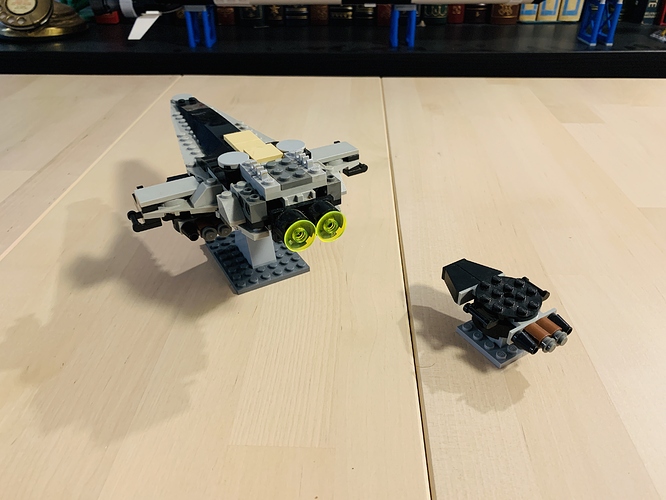 Next up we have this: 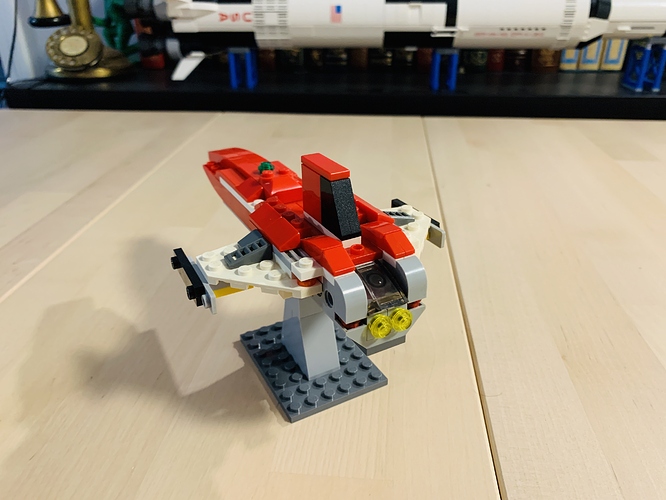 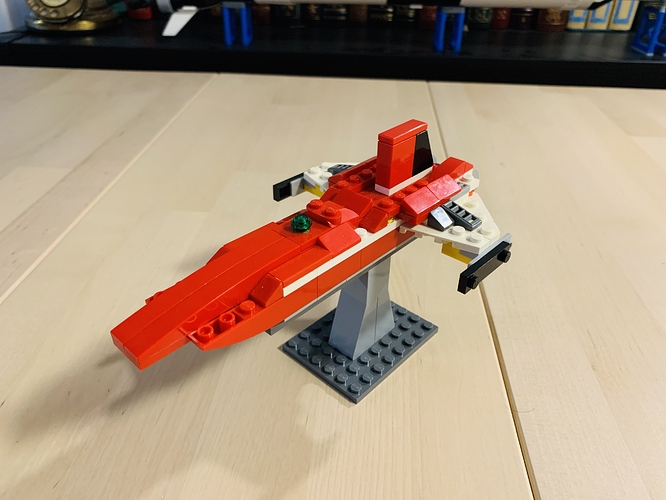 This design was conceived as an all-purpose warship able to engage enemy capital ships and/or launch naval landing forces in a planetary assault. Thus the long and deep hull. (Yes, I know. I really like cooling vanes.)

Lastly, I have this: 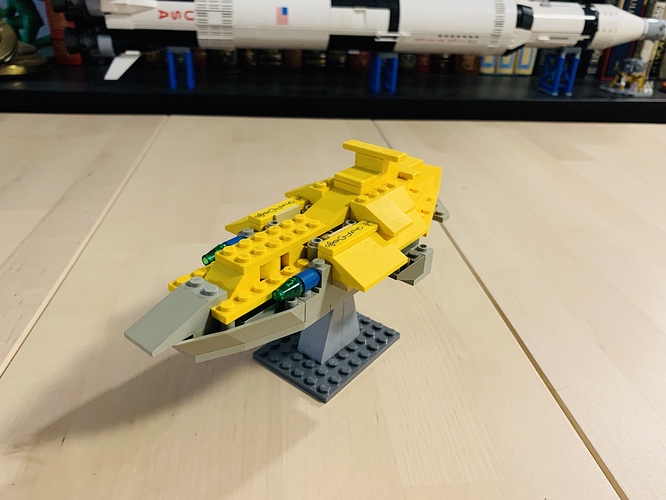 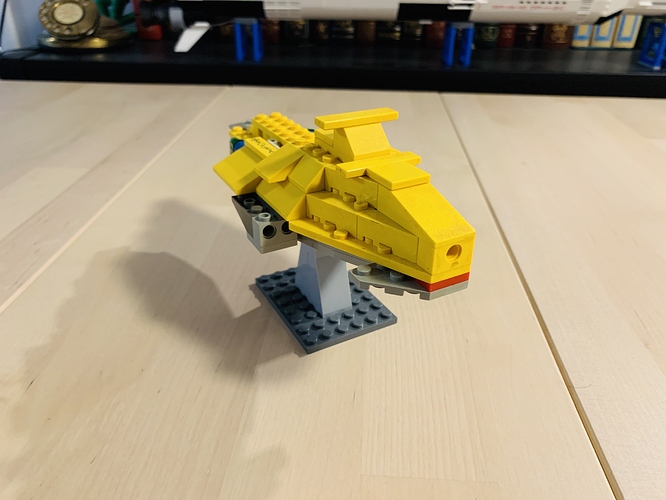 These are the massive dreadnoughts of an unnamed spacefaring superpower (which I will call the Boydesian Stellar Imperium, for lack of a better term

) They are designed to obliterate their opponents with massive, forward-facing main batteries able to punch their way through even the stoutest deflector shields.

Oooh, I love them! That Dreadnaught in particular is mint… although the little “launchable corvettes” are amazing too!

Are you from Derbyshire by any chance? Thats the only place I’ve ever heard ‘mint’ used that way

I am from West-West Derbyshire… also known as “Canada”.

I don’t know where I picked it up from, and I don’t think it’s super common in Ontario. But I read a lot and watch a lot of international television (Japanese, British, American, Australian)…

So you now know one not-Central-Derbyshire person who uses “mint” in that way.

In New England, if you’re my age, superlative things were/are referred to as being “wicked mint”.

Maybe its an age thing then and just because i was in Derbyshire until my early 20s, it just SEEMS that that is where it comes from an actually is just people roughly my age group (which is now mid-40s)!

I have a few frames I’ve built from my small collection: 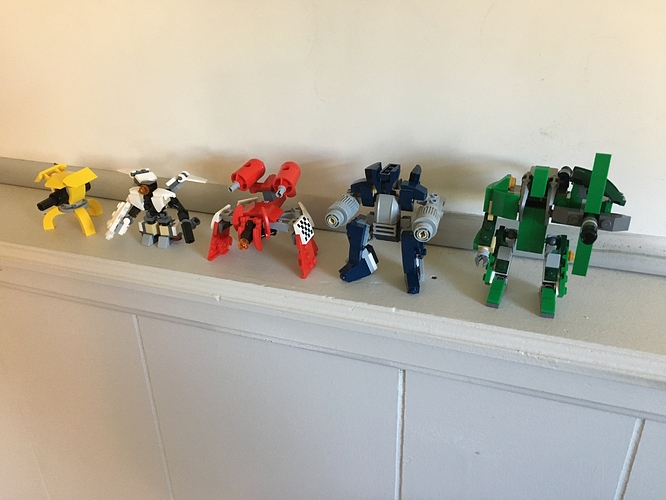 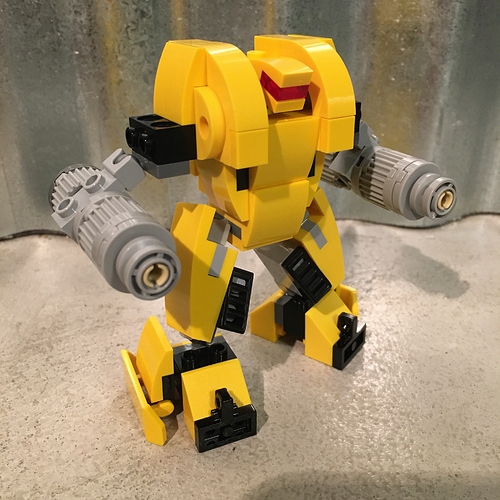 Random question, but since you built the Zealous, what is the third part in step 7 on page 45? The one they use to turn a 1x1 Round Brick to width 2?

Ah! That. I didn’t. I just left them as 1x1 rounds (my ship builds have several substitutions).

I think it’s supposed to be a tire like a 50945 or a 30028, but I couldn’t be bothered. I don’t have many tires, and I certainly wasn’t going to buy one just for a starship to make the engines look a bit chonkier.

As it is, I just left the 1x1 round peg under the “thrust”-glow. It looks pretty solid!

The big issue I’m having is the number of 3956s I’m supposed to have (2x2x2 90 degree pieces with a “receptor” on one side… all of my are “outies” that connect to other pieces, not “innies” that allow other pieces to connect to them). My several-thousand-piece collection has exactly zero, so I’ve been forced to come up with some creative alternatives (none are as strong, sadly).