I’ve heard very few things about 1987 Channel Tunnel, but every single one of those things made me more interested in this seldom-mentioned game. Over the last few days, I’ve learned quite a bit more about it. First and foremost: it’s easier to get than I had previously realized.

I’ve been subscribed to this game on BGG for a while now; recently I saw it pop-up on a Denver fleamarket GeekList. Now, keep in mind Denver is a good 8 hour drive, and I’m not likely to make it anytime soon, but I figured at the very least, I have a friend who lives there and could likely act as a middleman if it really came down to it. I sent a friendly GeekMail and had a short conversation with the lister-for-sale; he agreed quite readily to ship it to me for a reasonable fee. I was actually astonished at how economical it all was.

Only after this exchange did I realize I could have paid just slightly more and ordered it from the European publisher (and even be, erroneously, charged VAT for my troubles!) Oh well, had I realized this, I probably would have also grabbed 1920 Wall Street (which has also been on my radar, but with even less coverage).

Regardless, a tiny little package arrived today. I knew this game was small… but I did not expect such a TINY little box! I can literally fit it in my pocket, which is good because I’m running out of boxes to pack boardgames!

The tiny box, the reasonably nice components and a clever little 2-player worker-placement-y mechanism has me smitten.

You’re a brave man to be buying when moving.

Have you changed the address on your unfulfilled Kickstarters so they don’t show up after you’ve moved,?

Well, the advantage of buying before we sell is that I’ll have TWO addresses for a while where packages can be sent. So I’m waiting until we actually take possession of the new property before updating any preorders/kickstarters/replacement orders/etc (I’ve maintained a list because I knew this day was coming!)

So, in actuality, since I have two valid addresses for receiving packages, I believe that means I should be ordering TWICE as many things!?

I went into an actual shop today and bought Letter Jam as a borthday present, and Stay Cool- the cognitive overload game by Scorpion Masque about doing two things at once. I’ve called that a work game as I’m going to see if I can use it to teach cognitive load theory (when people can sit in the same room as each other)

I already posted about my first games of my newly acquired (well, last week) Tapestry…

And after many a recommendation/reminder, here’s the result of my recent ebay foray (this is the first game in years or even ever I bought there): 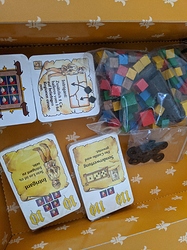 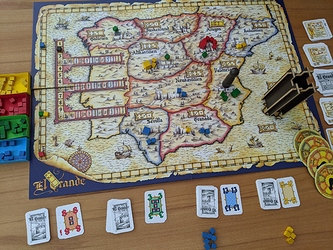 Except for the box which has some scuffs–probably from storage on a shelf, my FLGS has a copy of Bora Bora on the shelf that looks worse–this was good as new; the wheels weren’t punched and the cards were still wrapped in plastic

I didn’t check prices before I bid but after and found out I paid an okay price for a new El Grande and one expansion (~20€ including postage). I had played before but did the included practice game anyway to remember the rules.

I got EG during lockdown as well.

I have only managed one play of El Grande so far, but it was a really interesting design that I want to play again.

Sadly, that is true of far too many of my games.

If I was only allowed to keep one Area Majority game, it would be El Grande, got my decennial edition for £40 from ebay. All the expansion cards are still in shrink and it’s the Big Box in a normal sized box.

game big box are usually hard recommends as the boxes are huge for the game inside. Especially Carcassonne.

I believe all thats missing are:

The “Anniversary expansion”, where each player has a flag counter you place under your knight as a tiebreaker special power. Easy to proxy.

We aint missing out lol

When I’ll get to play it face to face, I have no idea…

I traded Core Space for some cash and a couple of games last week, made the swap yesterday. In house are Awkward Guests and Inhuman Conditions.

Ooh. Played that once, and I’d really like to play it more.

I can see it being a big hit with my non-gaming friends, but we shall see. Looking to let a couple into our bubble eventually so that may actually happen sometime reasonably soon.

Gave in, and even though I am not very good yet at it, it is a game that I enjoy playing, so I bought myself a copy of Splendor + Expansion that I saw cheap online… Sales have that effect on me, they tip me over the edge so often.

Just ordered Food Chain Magnate second-hand for the equivalent of $65. A good deal in the land of crazy boardgame prices, and I felt like I should own a Splotter game, even if I can’t see it getting played… ever? Hmm, maybe not the most sensible of purchases.

Interested to see what you make of the expansion. I bought it several years ago and have not yet played with it…

Time to start teaching your children to be ruthless capitalists!

Hmm, maybe not the most sensible of purchases.