That’s a hell of a game tomb

That’s bigger than Gloomhaven!!! We have a new big box benchmark!!!

We have a new big box benchmark!!!

Hmmm, how does it compare to the big version of Ogre?

This probably gives a fair idea: 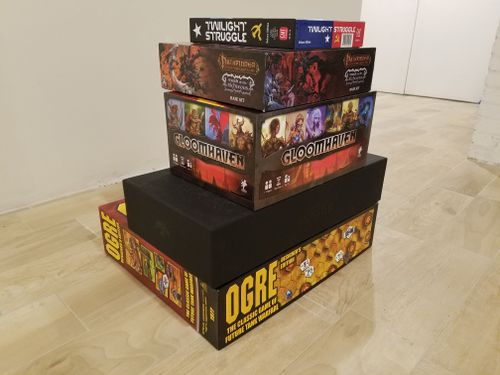 If I didn’t know better, I’d have mistaken Gloomhaven for a normal sized game from that picture! That’s bonkers!

My FLGS had one of those Ogre boxes in store following the launch, and the first time I saw it my brain needed a few seconds to recalibrate. I knew of the game, and that it was huge; but seeing it in person, the size of that box genuinely didn’t make sense to me. I am sure that some backers would have immediately regretted their decision when that monster arrived on their doorstep.

Because my goal for 2021 is to buy fewer games, I just made a purchase now!

The new big box of Hansa Teutonica, Imperial Assault: The Bespin Gambit, and a couple of IA figure packs to get up to free shipping. Considering these were two things I was planning on picking up anyway when I could, since the opportunity presented itself, I went for it.

Because my goal for 2021 is to buy fewer games, I just made a purchase now!

I just know that feeling… must resist…

It took maybe around 3 hours yesterday to get everything from the original game plus all the new stuff sorted into the fancy trays in my new giant Anachrony box. Then it took us another hour or so (would have been less but the dog insisted on a walk in the middle) to get a game with a new expansion setup and to refresh ourselves on the old rules plus read the rules for the new expansion.

After all that, it was late enough we thought if we started actually playing we wouldn’t be able to finish before bed so we just left it out, setup an ready to go. Hopefully we’ll actually play today! It does look nice vomited all over the table (and then some). Not sure how we’ll manage a third or fourth player once this pandemic ends. 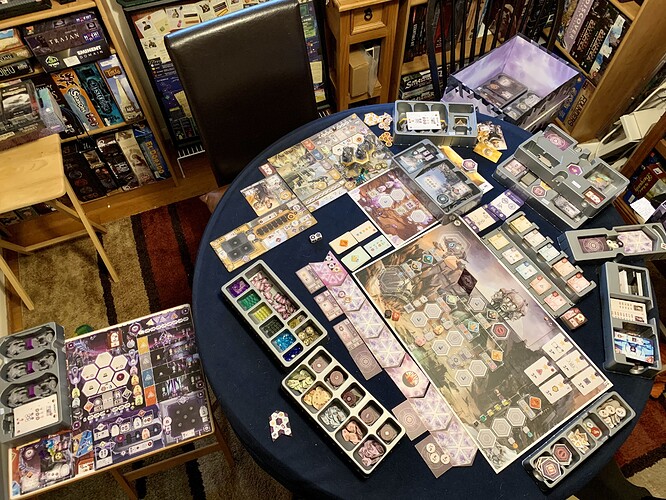 I received my final addition to the collection for 2020 today and completed my first ever trade from BGG: instead of Takenoko I am now the proud owner of an unpunched 2019 version of Orleans. This is not from the math trade but a random offer someone made from my trade lists…

PS: should have posted this to the “trade” thread, as this is not “bought” …

Orleans was one of my retail therapy purchases this year, that I really want to get to the table. Other than a solo setup to make sure I had the rules down, it has been sitting in its box, unloved.

Which is a shame, as I really like what I played, and am curious about the different community board in Trade & Intrigue, but can’t justify buying an expansion for a game I have not played.

Not really bought today, but my War of Whispers KS arrived today.

Time for a little last minute housekeeping on stuff coming in during 2020, in preparation for the year of 2021, a year marked by drastically reduced additions (unless more retail therapy is required? (!?)).

I usually stop buying things for myself about mid-November, so that gifts I receive seem all the more exciting and I don’t find myself receiving a duplicate item as a gift as something I bought from my wishlist.

As a result, I feel a tad guilty when I do get things for myself in December, so imagine my near-embarrassed reaction when December 23 marked the arrival of three different pre-order shipments.

Direct from Publisher (a.k.a. I gave EGG too much money)

I don’t expect to keep all 3 of the Lacerda designs… maybe I will, maybe I won’t. I think Lisboa’s reputation sets it as having my highest expectations. Vinhos is likely the short-timer and Gallerist may follow it? Time will tell. Best of all, all 3 are soloable!

I told my partner that I didn’t need any games for Christmas, so she bought me exactly 0. However, when asked for gift ideas by people shopping for me, she mentioned a few games I had pointed out at our FLGS.

The day after Christmas brought the mailman back around with something I honestly didn’t expect to arrive before 2021!

Rococo: Deluxe –
went to EGG’s website and found they had a bunch of discounts on their deluxe edition games

Probably not as much of a deal shipping to the UK; EGG ships from a warehouse that’s less than 300 miles (a.k.a. “right down the road” in Midwestern-ese ) from me.

Lovely picture. Really gives a sense of the scale you’re dealing with. Is that the table you play on? Will it ever fit?

That is the table we play on at home. I think with a little better organization of the pieces trays and boards we could get everything for a 2-player game on the table. Any player count over that and individual player setups will most likely have to be on a side tray table. Everything on the tray table in the bottom left corner of the picture was my husband’s player boards and pieces for the game we played.