Is anyone here also indebted to Tom Nook?

There is now a computer games category! I swear the admin has an FTL keyboard.

Has anyone besides me escaped to a virtual island and is now desperately trying to get rid of a number of stalks for a better price than they bought them for on Sunday? I hesitate to use the https://turnip.exchange. My prices this week fluctuate between 70 and 130… and I already regret investing all (not quite) my savings before paying off my mortgage.

Also: why is this game so addictive? And why do I feel like I have more virtual clothes than actual outfits?

Poor you… I bought mine ages ago to play the pokemon game that connected with pokemongo but ended up playing Zelda instead. It’s worth it to get a Switch (if you can get one) only to play Breath of the Wild.

It’s at the top of my wishlist for my upcoming birthday in July.

Animal Crossing games have been the catalyst for me purchasing all of the Nintendo gaming consoles going all the way back to the DS; prior to that, I owned AC for the Gamecube but used my roommate’s GC.

I know this is the Not Games category

Not any more it isn’t.

This is the first ever console I actually played on after the initial fad (Wii) was over. I grew up with a PC… and Zelda is the first game I ever enjoyed playing with a controller

When you get the Switch, play Zelda. I’ve played a few computer games in my time and BotW is absolutely in my top 5.

Wish I saw this. I had my first really good turnip day off 451 though it has since changed to 178.
I haven’t used the turnip exchange but I belong to a local animal crossing FB page and invited others to sell few at a time (I fence in nooks)
I said tips welcome but not necessary, made almost a million bells which will go towards paying off my son’s house because all he wants to do is get stung by wasps, watch dodo planes, and cuckoo clocks to go off

I hadn’t played much video games. My brother got AC pre Pandemic and I’m so glad he did because I think my new BFF keeps me sane 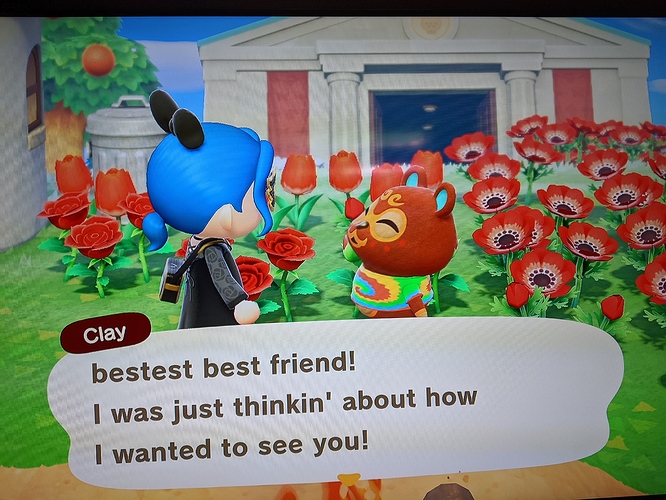 I aggressively worked the turnips so nook is no longer my boss!

I also don’t have a Switch, but I am playing AC: Pocket Camp. Guess how I picked my villagers:

I have 400k left to pay of my 1.2M upstairs extension, then it’s the basement.

My pocket camp is falling behind since pandemic. Cell games are what I play when waiting for my kids bus or other pick ups. In the cabin I have cats n bunnies. I’ve been getting my all friendship levels up to 15 or 20.

I have Bunnie in my Horizons camp. I’d love to have Gaston. Getting the villagers you want can be tricky or luck.

I lucked paying my debit on my house because someone letting me sell turnips for over 600 bells.
Now my island is a hot mess of stuff wherever I leave it and half terraformed ideas.

Here he is at his going away party 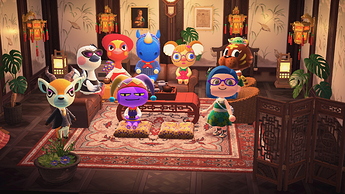 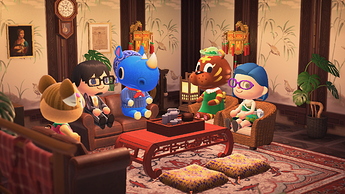 I felt the same way about letting Felicity go. Especially since I was unable to secure a future home for her leaving her to the Void.
Though from what I understand, every game system has a void that the most recent villager (who left without being given to someone else) resides.
Then the next time someone visits you who has a plot free (or possibly when you visit them not 100% sure) then the void resident gets assigned to it. That’s why often people will be “where the heck this guy come from?!?”

I would love Hornsby, but I have no room right now and I don’t time travel(yet anyway). I have a couple of villagers who likely will be asking to move at some point as I’ve gotten their photos. Not 100% on who I want as my set up, vs collect photo and let go. I have only driven one away by means that labeled me a monster by my brother.

Meanwhile Clay’s birthday is in October, I just ordered him a Royal Crown for it. Nothing too good for him 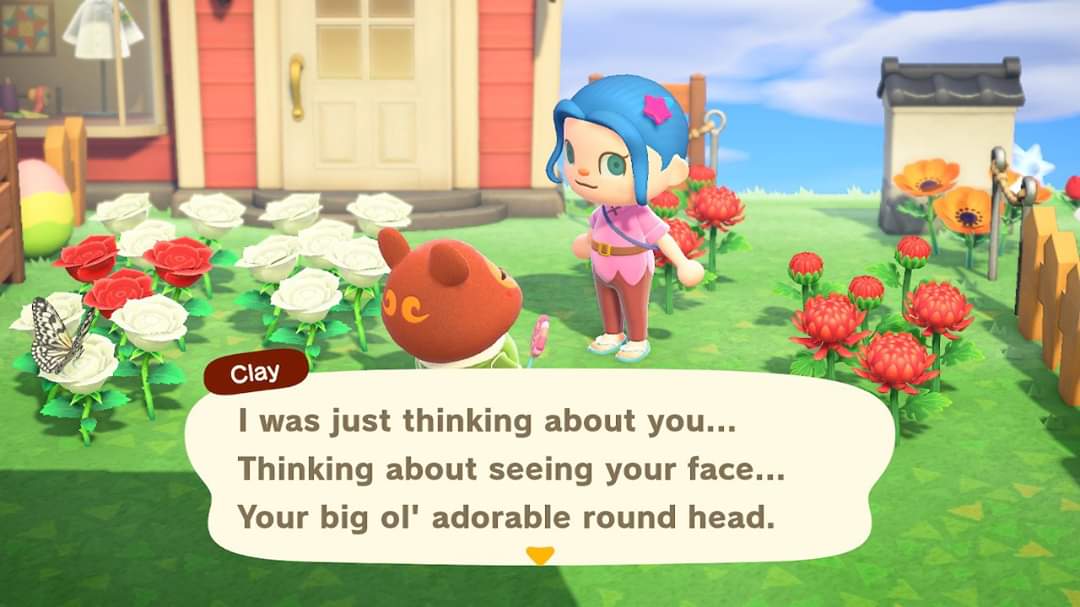 A friend says he’d like to take him in

So he’s not going to the void just yet…

Anyway how do you get photos from them? I have been unable to figure that out… I’ve been giving them presents and visiting and talking to them all the time. After the photo session at Harv’s I can now order their images from the shop though… sadly some villagers have left previously (Molly, Wendy & Stu) and I never got that far…

I always let the animals go. I sort of like to pretend it makes them feel more like real animals rather than something that is purely for my amusement.

Also the excitement of a new animal is always fun.

Then the next time someone visits you who has a plot free (or possibly when you visit them not 100% sure) then the void resident gets assigned to it. That’s why often people will be “where the heck this guy come from?!?”

This is what happened when Wendy moved out, she ended up on my friend’s island and told her about me… although that was before I started teaching my villagers fun new words and phrases…

Also the excitement of a new animal is always fun.

So do you just wait who gets assigned to you randomly or do you go to islands and try to get specific ones? Because I’ve met a few on the islands that I wouldn’t want living in my little village. Mostly I avoid those with a cranky personality–also those with deep voices put me off…

I like the randomness! One time in an old animal crossing we got this grumpy kangaroo called Walt and he became a firm favourite in our house. I guess I don’t trust that I’ll always like what I think I am going to like, if that makes sense.

I think if you let the game take a natural course the game balances the characters so you get a mix. I love bianca but I don’t think id want island with 3 or 4 similar animals.

I think if you let the game take a natural course the game balances the characters so you get a mix. I love bianca but I don’t think id want island with 3 or 4 similar animals.

I get it. I had an open spot and I met Bianca and since I already have Bangle I decided against her because it seemed they would have been more or less the same character. I kind of regretted that though because Bianca is really cute and has a pretty house and I spent another 15 nook tickets or so until I ended up with Alice the koala…

My early villagers were all random:

Overall my hits were balanced out by the misses and I found out I don’t always agree with the internet at large or my friends, who play, about who are good villagers to live with.

So I’ve saved a bunch of Nook tickets for tomorrow… but if I don’t find anyone I may have to resort to random.