Croup is just something young children are susceptible to. Our younger kid used to get it a few times a year. It is pretty scary, no doubt about that, but it can be caused by a common cold.

If it’s really bad, you may need to see a doctor as they can give the kid a breathing treatment, which is like an aerosol steroid that helps kick it. Otherwise, cold air can help, as can moist air, like soaking in a warm bath.

Hard to believe there was just one copy of that file on one employee’s computer, but companies have done sillier things.

I just got an email from someone I think might be in the dean’s office at my university that basically said “Oops. I got your file and didn’t forward it on.” Maybe my department administrator has successfully tracked down my lost paperwork for me now? Hopefully.

I would put money down that there is absolutely a hard copy somewhere, but turnover in our district has been so high that folks likely just don’t know where to look.

Thanks for the reassurance. I just want to check, as this is our first time: is struggling to breath and swallow while coughing and crying, with 38.5 fever, typical or “really bad” croup? Seems like the term can cover a really broad range of symptoms.

Struggling to breathe and swallow would be considered bad, I believe, and you may want to see a doctor for that. I mean, we went to the ER (since this always seemed to happen really late night/early morning) at least three or four times for our younger kid over the years because his breathing was really raspy, though sometimes it would clear up a bit on the way, probably from getting out of the warm house and into the colder night air (as this was usually fall/winter time).

The fever is not that worrisome, IMO, unless it starts spiking higher.

Otherwise, cold air can help, as can moist air, like soaking in a warm bath.

When my daughter had croup really badly, the paramedics who came out to us told us that nothing like that makes a difference really. It is more the attention from the parent, calming and comforting the child, that is making the difference.

But yes, we were given the steroids and she was fine within minutes. Unfortunately, this happened while at a New Years Party so my wife and I sat in the emergency room in fancy dress and rapidly developing hangovers so we weren’t so good!

I can only relay the info the doctor told us.

Maybe the jury is still out on this in the medical community.

So it would appear! I guess if there is no strong evidence either way, might as well stick with it

I don’t know how long he was up there, but they held a gym mat between some teachers under him and we don’t know if he jumped or fell (leaning towards fell), but they caught him on the mat, but it was probably a good 10 ft down.

So, at doctor’s suggestion, we are at the ER getting him checked out. Rather, we have been here for over an hour, we are in a room, and we are waiting for the doctor to see him.

He seems fine, just a few scrapes, probably from stuff in the ceiling. I will admit, when I furst heard he climbed into the ceiling, I laughed. We warned them he liked to climb. We also warned the school district that we did not want to change schools because he was a known quantity where he was, and this likely would not have happened there, but they forced us to change.

Now would be a good time for a follow up chat, and maybe some reminder about the duty of care they have.

We just got home. He’s okay. We had a false positive of blood in the urine. Many tests later.

Yeah I think once he was in the ceiling that would have been where I would have called 911.

We are exhausted, wolfing down food so we can sleep. But kiddo woke up and now he’s awake.

I am kind of impressed… But that sounds like a stressful experience for everyone, so I’m glad he’s okay! 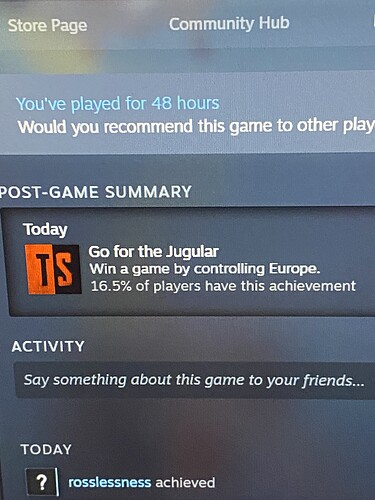 Are most of the achievements still broken?

My youngest is 8 but pretty small and baby faced. And at home he really plays to the “I’m mommy’s little baby bear” usually to try to get snacks. Think Bobby Hill.
Which is a nice change from his older bros “Daddy time only daddy, mom you can go”. 10 going on teenager.

Another thought they got his brother to try to get him down. My oldest potentially could have seen his brother fall and hurt himself very badly. That could have been traumatizing.

I know we are going to have to set up some safety meetings and it’s going to be stressful. I’m letting myself process until after we get back from Shux. Then start that process.

(And I know my kid is the one who climbed up there and got himself into this. But that’s like blaming a blind person for not seeing. It is a matter of his medical records that this is a known risk. Which we communicated, many times.)

I suppose this should go to the I created new life but this is what I’m dealing with.
I can’t control when I see the flash in my head of what my youngest would have looked like on a gurney. All broken. It was triggered when he cried out in pain from the ultrasound.

8 years old is firmly in “not appreciating the consequences of one’s own actions” territory with or without any additional challenges/complicating factors. I hope you manage to have some productive conversations with the school and no repeat ceiling adventures…

Things are finally starting to get into a rhythm at my house. Lovely wife and 3 of the kids are settling in with their new school routine, and little baby CR-90 is doing just fine at daycare. My school is struggling a bit with being short-staffed, and the behavior issues that come with that. Nothing line the @superjaz situation. That is legitimately terrifying, and definitely deserving of a serious IEP conversation. We’re a high school, so we’re dealing with dress-codes, vaping, and petty vandalism. It’s also the root of my whole missing-half-a-paycheck situation.

But I’ve only got one class left in this grad degree, I’ve managed to get some games to the table this week, and all the laundry is done, so the week is looking good!

all the laundry is done

I’m calling witchcraft on this fact. We need a trail to determine if you’re using black magic to achieve this feat.

My laundry was all done and then the kids came back from school and now, somehow, I have about 7 loads worth…