Heat: Pedal to the Metal

Just saw this on BGG: 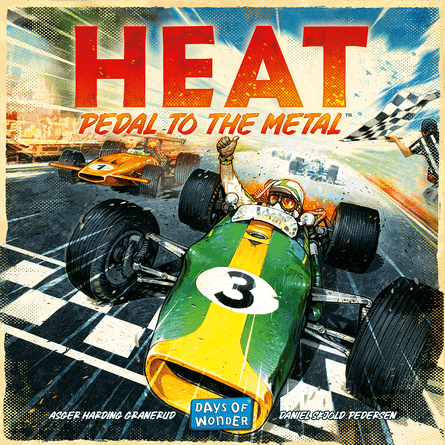 My initial reactions as something of a connoisseur of racing games (though I’ve never played Formula Dé and I’d like to):

I’ll definitely be taking a look at SPIEL.

Oooh. I haven’t got Flamme Rouge to the table enough recently and I’ve never played it with Metéo, despite buying it two years ago but this looks right up my alley!

Should I run another PBF Flamme Rouge?

And/or bring it along to Tekelilicon…

On the face of it, I think the hand management of FR works better in a cycling game (how hard are you pushing yourself right now) than for a car where for me it’s all about choice of speed and how you corner, but I’m interested to see what they do here.

Yeah it’ll be interesting to see what mechanics they lift from Flamme Rouge. Arguably things like slip-stream apply to both cycling and motor-racing but like you say, it feels better placed in a cycling game than being the core of a motor-racing game.

I’ve been fairly unimpressed with Days of Wonder’s output recently. They used to be the paragon of “do one thing at a time, and do it great”. Now they’re more of the “do one thing, give it nice art. And also, do another mini-Ticket to Ride box.”

That said, I’m looking forward to this one.

I saw this article and knew you’d be into this

More up my alley than bike racing, given the praise FR gets I’m down for this one

More about HEAT on BGG:

My impression: Flamme Rouge v2.0, including in the base box a bunch of stuff that in FR was expansion content. My only concern is that each track is a separate board (Formula De style), rather than having tiles that you can arrange (Flamme Rouge and Rallyman GT style). But it’s not as though the track shape makes a huge difference…

Raised to “probably buy at Essen” for me.

I’d guess it’s the kind of game where there would be a fan made tiles expansion, if you’re into that sort of thing.

Certainly seems a generous enough box for the price.

I may well see what can be done with the Rallyman GT tiles I already have.

I popped this and a manual coffee grinder onto my Christmas wishlist. We’ll see if I was a good boy.

The Timemore C2 (I guess potentially C3). It’s available locally at a good price (for Canada) and I don’t shop Amazon. My options are somewhat limited unless I’m ok paying crazy shipping and/or duty (I’m not).

Which is not to say I feel like it’s much of a compromise since it’s been on my radar for several years now, but it’s certainly not without competition.