Anyone tried it? The cost, set up and breakdown has always put me off but ive always wanted to play

I have not, and while I’m curious about it, I don’t think I’m going to be getting it.

It’s funny. Near the beginning of the pandemic, I picked up a couple copies of TTS for myself and my wife, as did our friends who we often game with, in the thought that though we couldn’t physically get together for gaming, we could still do a little bit. We have not used it together at all (though I have with some old high school friends here and there). We have set up some physical games and using the webcam played things like Lords of Vegas and Welcome to.

I’ve pretty much gone to just Playstation when it comes to video gaming, so I don’t think GH on the computer would be a good fit for me, as it would not get played. Much like the physical version, as I have Jaws of the Lion, and have only played it once so far. I liked what I played, but I want to play it with others, and so far that’s just not happening, due to a combination of very few game days, and the difficulty in getting new games to the table.

I’m going to wait until the inevitable Steam sale

The missing feature for me is the ability to carry over progress from our physical game to the digital campaign. There’s no indication such a feature will be added any time soon, so I’m not buying it.

I’m not planning on playing the digital version but the RockPaperShotgun review is very positive: 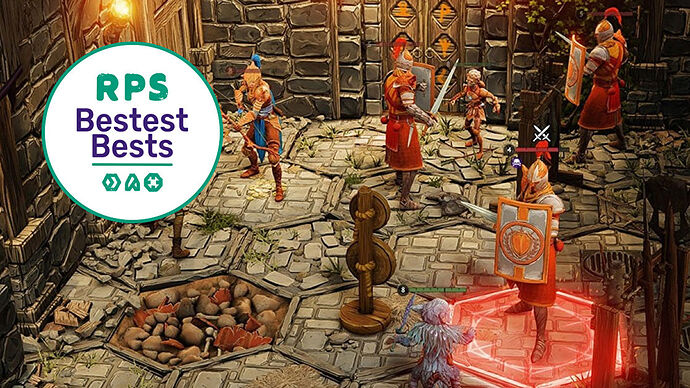 Gloomhaven PC review: a loving adaptation of the tabletop original

Short of somehow also being a massive box full of toys, I couldn’t ask for more from this loving and skillful adaptation.

I actually bought the GLoomhaven on Steam before I bought the boardgame. I thought it was cheaper to try out that way and it was. I needed r/Gloomhaven to help me grok the game enough back then but it convinced me enough to buy the boardgame.

However… everytime I went back in the time since (2+ years) a lot had been added but I kept noticing how many mistakes I made and for a long time there was no undoing. The same issue I have with the Spirit Island app.

Cooperative boardgames are often full of complex upkeep systems and on the table those are more forgiving of the mistakes we make, the wrong assumptions, the things we forget and go back and change.

I long to find the time to go back and play the digital Gloomhaven maybe just to get back into wanting to play it on the table. I think there is an undo now–after much clamoring from the players. I think there is a campaign now and not just a few random scenarios and all the characters should have been added.

I created 2 characters and went for the Black Barrow. And promptly lost. I forgot to rest with my Spellweaver and the app just didn’t warn me and with Cragheart alone I was unable to clear the last room. I also must have misunderstood or misread a Cragheart card because it just didn’t work when I tried to play it (something damages adjacent characters and when there is no character adjacent apparently the thing cannot be used, I really do not remember how we played it on the table).

This is exactly the thing with digital implementations of difficult boardgames. They just become more unforgiving and more difficult. Obviously, I will not repeat those specific mistakes if I play again soon, which I am tempted to do, except I have so many things I want to do that I do not even know where to start. However, as many of us already know Gloomhaven constantly gives you new stuff to not use correctly.

It looks lovely, is nicely animated and the campaign implementation seems really good, too.

I have not tested multiplayer obviously. But I might, I think my partner bought the game way back as well. 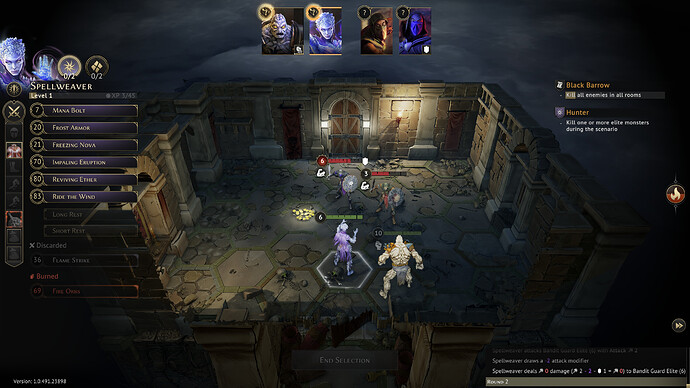 Well I got it some years ago for a good price during Early Access and played it some hours back then. It felt really good, really Gloomhaven like.

I can only assume it is even better now. Looking forward to some singleplayer fun. But it also offers coop for up to 4 players. Sounds nice.

So everytime someone asks about the Steam game, I am motivated to try again.

I am still on the very first scenario of the campaign. I chose Spellweaver and Cragheart 2 characters that have good enough synergy and I know reasonably well because it is what we played in our campaign.

So far on at least 5 attempts, I have never managed to kill one of the monsters in the final room. I keep making stupid mistakes like miscalculating the range on an attack and then having to skip my ability.

I clicked short-rest instead of long-rest and there was no possibility to go back. No confirmation.

I have not ONCE managed to choose the side of the travel event that might give me a bonus.

This is frustrating beyond belief.

I am waiting to get to level 2 in hopes of defeating this scenario then. Maybe I should play on easy. I thought I could deal with normal difficulty. I cannot.

edit: this time I came surprisingly close, I just miscalculated on when I had to refresh the Spellweaver’s burned cards. The Cragheart stormed into the room and with his leftover retaliates from that one ability I managed to take down 2 monsters! I guess if I had not messed up the Spellweaver I might actually have taken down the rest and survived… the question is do I try again?

Can you hotseat, or is it online multiplayer only?

Not really that I can see. Multiplayer is online. However, you could easily each play a character. The main thing that you would lose is that you can see the other player’s initiative straight away… but all things considered I regard this as a minor issue–the difficulty of the computerized version more than makes up for this.

PS: red birds should not be shot at I cannot remember between one try and the next. just great.

PPS: I added a Tinkerer and put the game on easy and managed to at least finish the 1st scenario (but I didn’t get the chest)

This is really interesting. I checked in on the Steam app over a year ago and the only thing people were saying then was how much of the boardgame WASN’T included in the early-access PC game yet, so if it’s fully complete now I’m quite keen.

Even more keen because I don’t want to spend £110 on the physical box when I only kinda enjoyed Jaws of the Lion.

This is really the identical campaign now. I am hoping I will eventually get the hang of it… because I can see myself getting back into our physical game this way at last.

Okay, so since moving to using 3 characters and playing on easy I have completed a couple more scenarios and I am getting to the point where I am making fewer mistakes and easy makes it possible to win despite some of them.

I understand why undo functions are not available once you’ve drawn some random result… and yet… in any case if one made a big mess and is unwilling to start over with the scenario because of a misunderstanding it is possible to “return to menu” lose the progress on the given turn and resume to correct a mistake. Also as in real™ Gloomhaven, losing a scenario only costs time…

And as soon as you start getting some perks and some higher level cards the game becomes much like the one on the table: addictive

So. If you are willing to get through that initial frustration of learning to play the game 100% correctly and live with (most) mistakes you make… it’s Gloomhaven. What can I say. And it takes less space, plays remote multiplayer and costs 20€/account (or less if it ever goes on sale). You can probably have multiple campaigns going. I haven’t tried that. But if the pandemic gets back to last-winter levels I might ask our previous Gloomhaven associates if they would like to start a game

here’s a screen of my world-map and “guild”: minor spoiler’s for first 2-3 scenarios 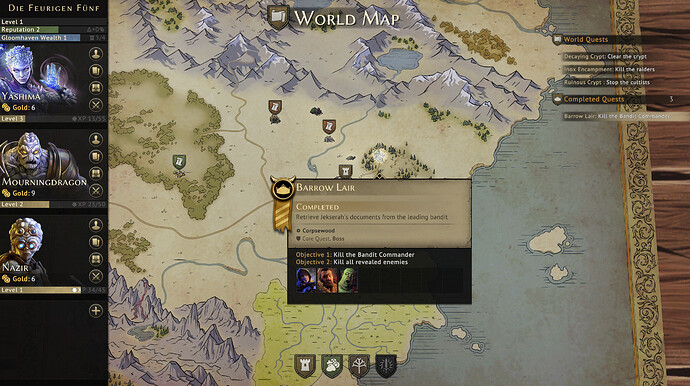 If anyone wonders about the differences between board game and pc game. I copied that from their discord.

Chimeric Formula Bottom Ability is different, because of the excessive demands testing the original would require. Unrecoverable abilities become unrecoverable when used. Such a card lost for some other reason will be recoverable with

Attack Modifier Decks Bosses, allied monsters and neutral monsters all have separate modifier decks to normal monsters. While the in-scenario curse limit is enforced, all four characters may receive three curses from a scenario effect.

Enhancements: Enhancements won’t persist past retirement. They’ll be removable, as they were in Guildmaster, and can be sold back to the Enchanter for their original cost. They’re also entirely independent - an enhancement to one Cragheart in your party won’t be applied to any other current or future Craghearts in your party. (edited)

Items: Some items have changed to avoid user interaction. Leather Armours have 2 charges . Some findable items

Campaign Scenarios: While the large majority of scenarios will be as they are in the original, a few have minor differences where equivalent special rules have been substituted. You cannot play scenarios locked out by achievements, even in casual mode.

Things that make a better computer game: Enemy and summon movement is automated. There is thus no player choice for ambiguous movement. Multi-target attacks are simultaneous. There is thus no mid-AoE ability use or item refresh.

Solo Scenarios, Envelope X: These are not in the computer game - Not the solo scenarios themselves, nor the solo items. Neither is Envelope X itself, nor its reward.

Btw. My Spellweaver and Cragheart are now level 5 and I also managed to get Tinkerer and Brute to level 3. I have discovered there is a “reset to start of round” button for the big mistakes I keep making. It’s a bit on the cheaty side to reset a round because all random results remain the same. But I try to keep things as I did except for the misconceptions I had or the messed up cards (sometimes when you have 2 “Move 4” bottoms… it is hard to remember what you planned to do by the time character 4 has their turn and there is no undo once you committed to a card by doing whatever…

The punishment of having to do to a whole big turn yet again kind of offsets the whole thing. And I have gotten much much better at this again–Gloomhaven is just a difficult game and having to keep multiple characters straight is a bit on the brain burny side. But it’s fun and guess what: it’s fun because of the campaign. Playing scenarios is great but what makes the game is the character development… I am looking forward very much to upgrading my first card sometime soon.