Roger mentioned a possible future outing with FFG Star Wars/Genesys in the CoC edition discussion topic and I thought I’d start a topic for discussion of experiences with the system.

Edge of Empire worked well for my group and I think there were three factors that mitigated the stated concern about GM fatigue:

I do like playing this as Star Wars. Genesys has not made a persuasive universal argument to me and I have not picked it up to read yet, although I expect I will. In summary I think they have a fun setting specific system and that setting has deep enough roots in pulp adventure that it will be functional up and down that tree.

The impression I’ve got so far, which is hearing other people talking about it rather than playing it myself, is that Genesys might be an effective competitor for Savage Worlds (which I don’t despise, but I’m not a fan of it either, mostly because of the way everything seems to come down to bennies and stun-locks) – in the medium-complexity pulpy game-space, rather than the long grass of mostly-realistic GURPS where I tend to live, or something lightweight like The Cthulhu Hack.

Is it a ‘funky dice’ system? Or can it be played with normal dice?

Funky dice. Using normal is possible but would slow things down I suspect. 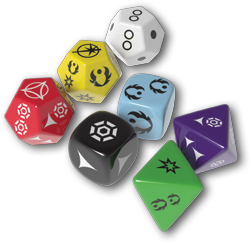 I’m sure one could set up a symbol table mapping, but I agree with @WolfeRJ that it would slow things down a lot.

Home to library. Table 1-2 in the edge of empire core book is a standard to “funky” conversion chart.

It is not on the GM screen.

I think the only game with “unusual” dice (assuming you can call polyhedra “usual”) I’ve enjoyed has been Fudge. There’s always the suspicion that the designer is being different purely for the sake of it, rather than the special dice offering a genuine benefit.

Nice little earner for the publisher, too.

Well, yeah, at more than £1 per die they’re clearly making a profit on the things.

I’m generally not a fan of “roll a bunch of dice and count how many successes you get” systems because the probabilities are usually messed up (more game designers should employ statisticians, not to mention technical writers) but I’ll give it a go…

I’ve played a LOT of the Star Wars game. The dice work, and really encourage the narrative.

Genesys is a nice system I think. Hopefully, I won’t b*gger it up too badly when I GM it…

Reading the worryingly large Genesys rules… I suppose I have some misgivings about how this will work online, but I’m willing to give it a go! Maybe we just need to get used to the dice.

Once you start, it’s pretty quick.

I’ve printed out a character sheet! Three slightly daunting pages… Haven’t had time to read much of the rules yet so I’ll mainly have them to hand as a reference.

When I was explaining it to my players it seemed helpful to refer to a hand of dice like a hand of cards. Passing blue dice or upgrades of green dice to yellow dice among the players felt a bit more like partners passing cards from hand to hand for a play.

The abilities that let players discard black dice in particular were hard to remember and we had to set up some 3x5 cards for reminders.

Having just survived character generation… the colour selection is distinctly non intuitive, but I start to see how it might work.

I enjoyed character gen. I’ll be interested to see how it plays… I love the Fallout setting, but I may have spent too many happy hours targeting Super Mutant’s balls with my PipBoy.

So we played more of this last night. I’m loving the setting and I think the basic system is fun, but I’m a little baffled as to what the opposing dice add to the game. Functionally, the results you’re getting are: success (+/- advantage), failure (+/- advantage), triumph or despair - I don’t really understand what the benefit of using opposing dice is, compared to a fixed ‘this is a medium action, you need two successes’ mechanic.

Effectively, it’s a success-based system, which is not exactly new - I think Shadowrun may have been amongst the first to use this style of ‘roll 1d6, on a 5 or 6 you get a success’ mechanic. I do feel that fixed targets would be quicker to work out, with perhaps one extra ‘wild dice’ (like in the d6 Star Wars system) that determines whether you got advantage or disadvantage. Mechanically, having opposing dice slows the game down (as everyone works out what has cancelled out what), adds an extra and possibly unnecessary degree of unpredictability - maybe without the unpredictability this creates, there’s less need for triumph and despair?

The older cynical me feels that this is basically just a way to sell more dice, especially given that the Star Wars dice are different from the Genesys dice. I wouldn’t be at all surprised to see more setting-specific dice coming on the market.

That said, the younger less cynical me is enjoying rolling coloured dice and working out what I end up with, so maybe I should listen to this younger fella first. I am really enjoying Mark’s game, and the system works nicely enough, it just feels rather gimmicky and unstreamlined - very far from unplayable, but perhaps not as new, exciting or innovative as it appears to be.

I’m quite liking the mechanics so far. It’s another of those systems like 7th Sea which wants to put success/failure entirely in the hands of the players – the GM can set the difficulty, but there’s no way of saying “roll and see how well you do” – but I think it’ll run faster once we’ve got a handle on the silly symbols.

At some point I’ll work up a probability table… oh, wait, someone’s done that. Article:

A little while ago, I gave Star Wars: Edge of the Empire a reasonably positive review. After another year of playing the game, it’s time to check in again see how it’s faring, and to tr…

Interesting article, lots to digest. Hopefully my relatively low characteristics won’t prove frustrating, given that the system seems to short-change the skilled.

Oh, ick, he’s using repeated rolls rather than working out the combinatorics. I’ve written a program to do the latter. It’s just a matter of working out how to present the information.

After another session tonight, I think it’s starting to make sense. Definitely less broken than Savage Worlds, in that all bonuses will increase your odds of good stuff happening, and all penalties lower the odds. (Which you’d think would be fairly basic, but both Savage Worlds and original World of Darkness got this wrong.) In effect there’s a bell curve going on, because adding dice when the probabilities of success are moderate seems to have a greatersmaller absolute effect on your chance of success than adding them on the low or high ends. (Yes, I have written a command-line program to calculate this. Because Roger.)

I’m not a complete convert, but I’ve got to the point that I might give serious consideration to running this some time when I want a light action-based system. (And hey, all the Whartsons now have a set of dice.)