“Z-Man” (i.e. Asmodée) will not publish Princes of Florence (rights returned to Wolfgang Kramer), and they’re closing down production on the rest of the line in favour of making lots of money off lush Kickstarter editions of old games.

And a bit of a dig at SU&SD, as it’s ALL THEIR FAULT apparently for daring to praise Somebody Else’s Game:

Alternatively, if you do attempt to re-release a game via traditional distribution channels, then you need to pray that any number of witty UK board game influencers take notice and give you coverage. Those folks hold massive sway over the current industry’s focus, and without a ringing endorsement poshly articulated in the Queen’s English (“Best Euro Ever” anyone?), your revised labor of love is headed for a Miniature Market fire sale.

(Trust me, Quinns does not speak the Queen’s English.) 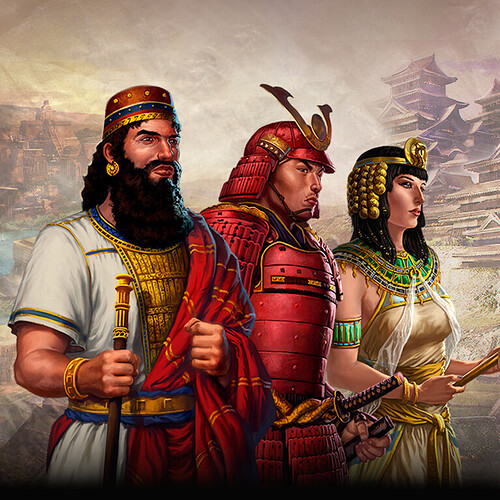 An Ode to the Euro Classics

A fond farewell to a series of classics

Somehow blaming reviewers (who have gone out of the way to point at some of these games in the best possible way) for the closure of a product line that must have been doing very well.

I have the Windrider edition of Ra and have been awaiting the chance to grab Through the Desert (I have a KOSMOS edition of Durch die Wüste) and a Mayfair edition of T&E that I’ve been hoping to replace with prettier copies. Sadly, when these go on sale, the sale price is still more than most other games, and they rarely hit the secondary market.

I’d say this line was doing extremely well for a series of games that are almost exclusively twenty years old.

I’m guessing there was actually some mismanagement of the portfolio by Z-Man/Asmodee.

I’m guessing there was actually some mismanagement of the portfolio by FFG/Asmodee.

This I would disagree. Z-Man was always awful at reprints even before Asmodee. It went downhill since Zev left. (And incidentally, Wizkidz is doing well, when Zev went on board)

Upon further reflection, maybe my experience (above) is the telling tale: I’m the type of consumer that looks for low prices (sales and/or secondhand market). It’s not my money they’re after. They want the fans (and money thereof) of the likes of CMON’s fans. And 20-year old games are just never going to draw that crowd. So, if you want 20-somethings (one of the demographics that traditionally has had the most disposable income), you need overwrought, monstrous buckets of miniatures with the potential for dozens of expansions.

That quote is so weirdly petty and spiteful that I almost think it has to mean something else. I just can’t imagine anyone who would look at the thesis of “UK board game influencers ruined these remasters of classic Eurogames because they didn’t describe them as the best ever made” and actually agree, much less agree enough to think it’s a good idea to publish that opinion to the world. I keep thinking that maybe it was meant as good-natured ribbing, or even a simple agreement that Hansa Teutonica is great (since he mentions the game as a candidate for the series earlier in the article), or something other than the obvious meaning… but there are just too many red flags to support those alternatives. I do sympathize with having to shutter this line of games that he clearly seems to care a lot about, but a random sucker punch on the way out is odd.

Well, the availability of these games over here was non-existent except for a handful of overpriced copies via that certain online retailer that shall not be named. I wish I could have got any of those remastered titles… and who was it put me on the Knizia games? SUSD… so yeah whatever that bitterness is, it is misplaced.

They just want their media types to be cheerleaders. Shut up and sit down, so to speak. Yucky stuff from Z-Man (Asmodee) there.

Looked at in terms of raw short-term profitability (which is what a private equity fund does, more or less by definition) I think you’ll expect to make a lot more money out of a big flashy FOMO-ful kickstarter for a fancy edition of a relatively light game than you will from a new edition of a heavier game for which the audience is likely to be more price-sensitive, even if you start from the same basic position of “new edition of an old game”. (And this will be percentage profitability, not absolute: if they make a 500% return off a tiny game that’s better than a 20% return off a big one even if it’s less money, because they can publish lots of tiny games in parallel.)

Note that SU&SD’s Hansa Teutonica review made a point of mentioning the low price – and if I were engaged in maximising income I might well feel that as a slight dig of “why can’t other companies produce boxes with as much stuff in them for the same money, especially companies that have massive economies of scale in manufacturing”.

I really want to know the controlling logic that governs Asmodee pricing models. They appear to have the highest prices and the shallowest discounts, yet they should command a near-market-breaking economy of scale when it comes to manufacturing and distribution.

I want to play princes of Florence now.

I have it in my shelf of shame. I hope the beige cover art is a turn on for you 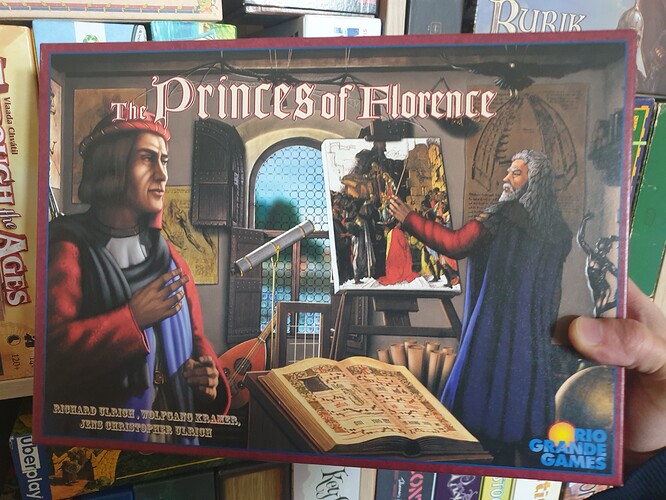 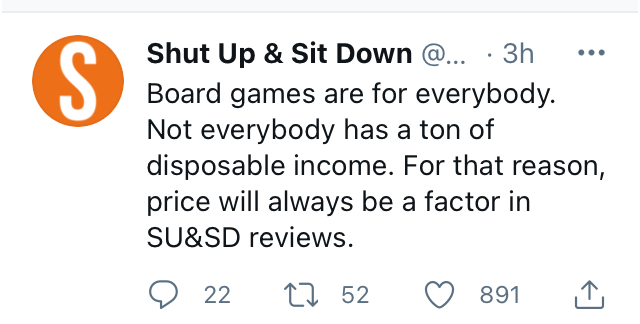 The painting should have been of the cover of the box, to get that Droste effect.

I really want to know the controlling logic that governs Asmodee pricing models. They appear to have the highest prices and the shallowest discounts, yet they should command a near-market-breaking economy of scale when it comes to manufacturing and distribution.

An economist writes: price setting is hard, and while microeconomic theory has some things to say about it it doesn’t have all the answers.

The obvious stuff is obvious: broadly speaking, the higher you set your price, the fewer units you sell. (That’s the demand curve here – because the people who first drew these graphs were mathematically semiliterate at best, price is on the Y-axis even though it’s the controlled variable.) 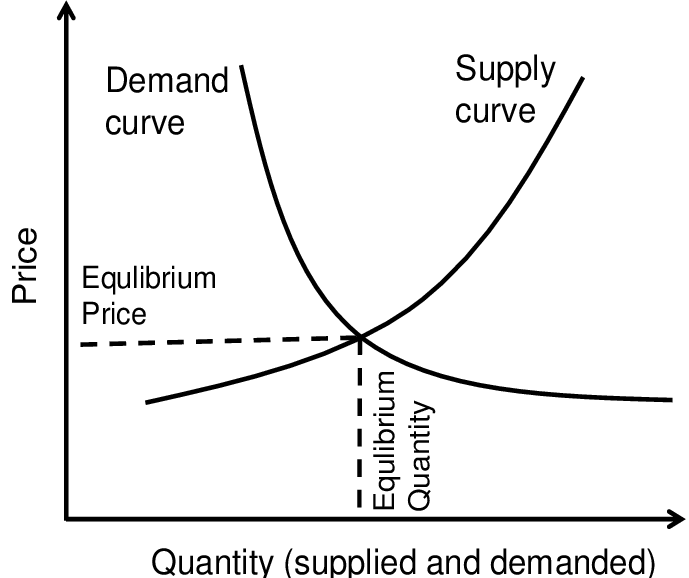 This makes a lot of assumptions, one of which is that there are multiple suppliers and the goods are interchangeable; you might draw this graph about “standard entry-level chess sets”. If BigChessCo has over-priced its sets, a smaller manufacturer can move in and capture part of the market by undercutting it. (That’s essentially the supply curve, which won’t be relevant hereafter.)

To some extent this applies in boardgames: if I don’t like the price of Through the Desert I can buy Hansa Teutonica instead, and it may satisfy my desire for route-building if not my desire for camels. But obviously the more of a monopolist A. becomes the more likely it is to have control of all of the alternatives in a particular gamespace, so if people don’t want to pay their prices they can just stop buying new boardgames completely.

So let’s say that for some subset of the games this control has happened, and A. can set the price to whatever it likes. Its income is price × quantity sold, which traditionally is fairly constant; its expenditure is production cost × quantity sold. Normally one would expect that production cost would drop with quantity, so the best approach would be to minimise price and maximise quantity.

And if for example “big box game” costs about ¤90 whichever publisher you go to, even if A. could be profitable at ¤70 instead you’d get purchasers who’d rate it as a lesser game merely because it “doesn’t cost enough”.

Addendum: none of this concerns the potential morality of deliberately pricing games at a level where many people can’t afford them, because maximising short-term profits allows no possibility of moral considerations.

One traditional way to segment the market and extract more money from it is to have a range of substitutable goods at different prices: the cheap plywood chess set sells to the people who can’t afford the nicer one, so the latter still get to pay the higher price. Coupons and rebates and such are another approach: most people won’t go to the trouble of jumping through the hoops of getting the lower price, and the ones who do are likely to be the ones who can’t or won’t pay the higher price in return for saving themselves a few hours.

But in the boardgame model, it’s:

Just read the article. Considering SU&SD had nothing but praise for all of the other Euro classics line shown, I sincerely doubt Princes of Florence would have been any different had it actually been re-released. Yes, price would have been mentioned as a factor in their review, but if it’s a good game, they’ll call it a good game. That part of the article just stands out and feels like a lame excuse.

I wonder if the tone has gone wrong but I think what they mean is that unless SUSD praise a specific euro all other Mediterranean man euros are dead. There’s no money in anything but what susd gets to sell out or expensive multiple dead dinosaur products.

But in the boardgame model, it’s:

Except when you own the distributors and can set the price the retailers charge.

Yeah, these are arbitrary numbers just to show how it can work.

This is sort of how I took it. With a lot of influence in the hands of very few people, you have some hard-to-manage risk.