It’s less than a month away.

I plan to be there (first time since 2019), and I’ll spend much of my time demoing for Indie Boards and Cards at 2E-106 (Thursday morning, all day Friday and Saturday, Sunday afternoon).

Who’s going to be there? Things you plan to take a look at?

I’m curious about Heat (but I have a lot of racing games already); if there’s a show deal on Spirit Island (unlikely) I’ll pick up a copy for myself; Spaceship Unity looks interesting though I suspect it’s not for me; and if I can demo Septima I may finally be able to decide whether to buy it or write it off.

I’ll be at Essen for the Thursday and Friday, before heading off to Munich and Berlin for a few days holiday.

Not sure what I’ll be checking out at Essen yet - I need to go through the list of games on BGG.

I am currently planning to attend Thursday and Friday but my plans are bit wobbly at the moment as my partner is not too keen on another trip. If he decides to join I may end up being there on different days. I am also meeting up with some gaming friends from uni probably.

Games at the fair that I already have, backed or pre-ordered and therefore not take a closer look at: Cat in the Box, Heimliche Herrschafft, Iki (DE), Oranienburger Kanal, Stationfall, Skull Canyon, Tindaya, Vengance Roll & Fight (just arrived at home where I am currently not, I blame SVWAG), Septima (demo only), Voidfall (demo only). With the exception of Skull Canyon I have not played any of these—mostly because most of them are still „en route“).

Then there is a bunch of expansions I am keen on buying: Red Cathedral, another The Loop expansion and Roll Camera. Since I got the English versions of Roll Camera and Red Cathedral the fair is probably the easiest way to obtain the fitting expansions -.- Meh.

I am also hoping that because yet another Endangered expansion is coming that there will be an opportunity to test that and decide once and for all if I want to own Endangered or not. (I just passed on it visiting a boardgame shop while traveling).

Then there are the games I am interested in:

There is a current trend as exhibited by the new Feuerland title „La Famiglia“, CGE‘s „Deal with the Devil“ and just now on KS „Weimarer Republik“ to make games that work with exactly 4 players. I do not know what to make of this. The one I am most keen to own is Weimarer Republik because of the historical setting.

And „ferner liefen“: games I will probably at least have a look at: Autobahn (my city is not in it so I am not getting it also a theme I disagree with), Endless Winter, Resist, Unconscious Mind (only demo), Turing Machine, Heat (because Days of Wonder), Evergreen (Hjalmar Hach), Terra Nova (to gripe how it is not Terra Mystica), Planet B, Skymines (because one day I will find a Pfister game I like, I lie I enjoyed my forays into GWT)

If I can I will definitely shop that Spirit Island Target thingy however it seems to have vanished from the preview or I overlooked it.

Ps forgot KuZooka the latest Colovini where you cooperate to break out of a zoo. I blame the weird spelling.

Don’t know whether this affects anyone else, but I’d been planning to stay at the Arosa on the Rüttenscheider Straße, and today I learn:

Unfortunately, we have to inform you today that we have to close this house from September 11st, 2022 to November 30th, 2022 due to urgent renovation work.

So I’ll be staying in Mülheim a.d.Ruhr and commuting in each day. It worked all right in 2019; as an exhibitor I get to use the Good Parking directly under Hall 3.

And I have booked my train ticket

And now I have also booked my SPIEL ticket

Thursday + Friday it is. Probably for the first time ever without my partner. -.- too much going on. He can still decide until the week…

Been checking the Spiel Preview at BGG… seeing the MSRPs on the preview and comparing it to preorder prices on some of my OLGS, I really have to stop buying games at the fair. It is worse than ever.

I tend to walk around with boardgameprices on my phone just as everyone does at UK Games Expo. What I go to Essen for is less the New Hotness and more the weird obscure game I’ll never hear of anywhere else.

Obscure games, definitely.
In other years I would also scour the used games sellers—not this year though.
Also more and more looking at Asian publishers whose games rarely make it to boardgame shops near me.

I’ve never had much luck with the used game sellers, either because I’m looking for too-new things or because I mostly want English-language versions.

Yeah! The Asian parts were my first go-tos back in 2019 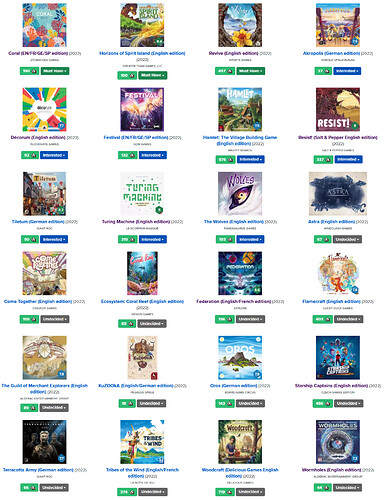 Of course the plan is going to change a few times and it never survives entering the halls and getting stuck at a booth that you didn’t even think about when looking at the preview and then never getting to try Revive because suddenly everyone is interested in Civ games with hex tiles… and never finding Coral because the publisher is in some last corner of Hall 8 and also all their games are stuck in some container in the Suez canal (this is not exactly a completely new problem).

I mean, I do say “Yeah I’m on my way”, but I’m actually at home putting my shoes on

On android play store search “Spiel 22” to find it

Looks like “com.eyeled.spiel” if you do the app ID thing. Thanks! Claims to need GSF, but seems to run without it. 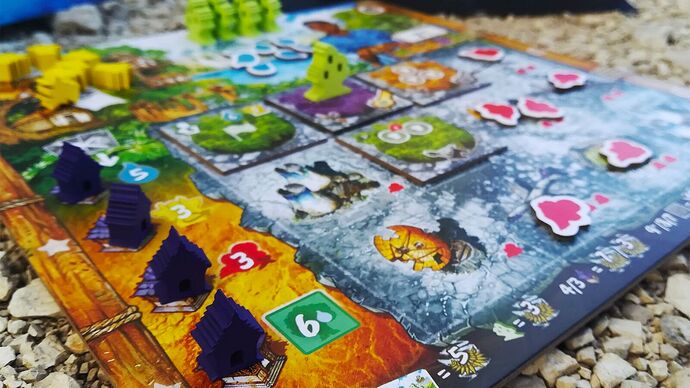 A dozen must-play tabletop releases at this year's German board game convention.

The rest doesn’t speak to me.