There’s been a couple of reviews of Challengers. It looks kind of fun if you can get a gang to play it. The way I think it makes the game work fast for loads is a heavy amount of randomness and this kind of simultaneous tournament play. (So with 8 I guess you’re playing four 1 v 1 games at the same time)

hmm weird. mine is an espresso every 2 hours, cough drops and chocolate with whatever quick lunch is available and then staying up way too late talking with my hosts

weirdly It took me a long time to get in the mood for playing. really only played games afternoon if day 2. rest was just spent wandering around taking it all in and hunting games that were sold out.

my train home was just canceled. luckily, I saw it coming and took an earlier connection and I’m almost home. need to play games that simulate train delays

Back in my GenCon days it was cold Pop Tarts and Jolt Cola (“All the sugar, twice the caffeine”), which I expect would kill me in short order if I tried it these days.

The train I was due to be getting to Berlin was cancelled as was the next, eventually got there via Hamm. Some messing with train lines, I understand?
Essen haul was less than I expected: King of Monster Island, Horizons of Spirit Island, Scout, some small expansions for Eclipse, Let’s Summon Demons, the new Neuroshima Hex expansion, Combo Fighter and some promos.
Decided to wait on a couple of things - Terracotta Army, Hamlet, Heat, Starship Captains. Couldn’t get Village Rails or Blitz Bowl Ultimate. Slightly annoyed that Asmodee were giving away Marvel United promos with the core box, but not selling separately {although they may be selling spare copies on Sunday, oh well}.
Enjoyed the Con, up for going again.

There was sabotage on two sets of cables that are necessary for GSRM-R which is needed for the digital communication of trains. All of northern Germany was cut off yesterday for multiple hours. Train services were in Chaos everywhere. My train home was also canceled but I managed to get an earlier connection going south (lucky me) and got ahead of the wave.

The most important food group. Standard reference thumb for scale. 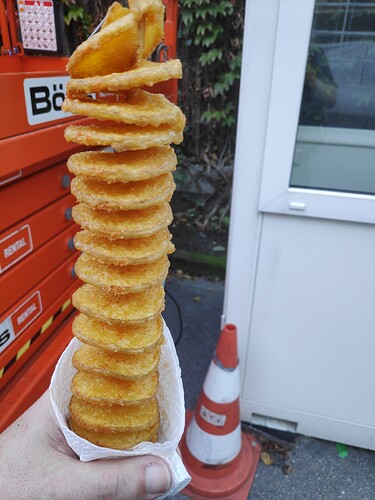 those are the best. didn’t get to eat one this year though.

That looks all kinds of fatal.

Health warnings: do you care about your health? Then you’re eating at the wrong place. (The currywurst shack outside the fair is still there too.)

I’m not saying I wouldn’t eat it.

And it’s over, with a demo that ran until my last victims’ friends came to haul them away. Booth struck in 20 minutes flat (you’d think we’d done this before), and home we all go until next year. I love this show.

I went to Prague last week with my partner Emily who mentioned “Potato on a stick”, and there was much frantic googling to find who was serving it because we saw one in a crowd, but we were not successful. They look awesome and I now know the importance of locating them.

I finally managed to make a small album with all my SPIEL pics: 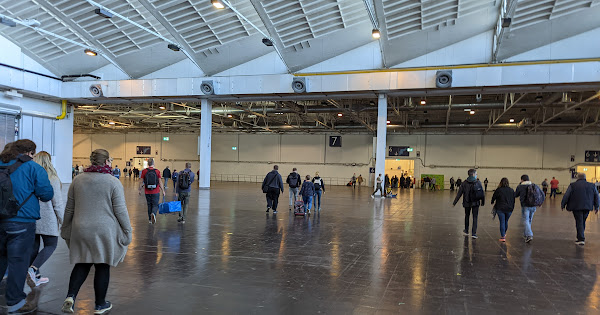 I didn‘t get to play a lot of games this year.

I had a ton of anticipation for the fair but going alone plus a couple additional mishaps before I even got started erased most of my Vorfreude. So when I got to the fair I wandered aimlessly despite being thoroughly prepared. I had little desire to sit down and play. I am used to being 2 people looking for a game and never having to hope to find other players as we were always at the very least 2 people.

There was a mask mandate for the whole fair—no medical exemptions—and people were surprisingly disciplined. I felt safer at the fair than at my dentist a couple days earlier and so far I have not heard from any of the groups I know were there that anyone caught covid at the fair. I am sure some people did but it is definitely not as high a risk as it might seem at first glance. A ton of people were wearing the FFP2 /N95 masks and almost everyone was also wearing their mask „correctly“ (covering noses included).

I got to the fair around 10:40 on Thursday and by that time certain games had already sold out for the day as some highly anticipated games were only available in very limited quantities. New to me: they kept games back for every day of the fair. This has not been the case in years past. So you could get another chance a day later… I met people who stood in line 50 minutes to buy Lacrimosa. The fair is still almost all cash. There were 2 booths where I was able to pay with my debit card (Blue Orange and Boite de Jeu) other than that including food and drink „cash only“. I saw a couple of very hungry English-speakers going past the food-stalls complaining that they couldn‘t find anything that wasn‘t cash.

Day 1 I played no games at all but got a few game explanations at least. I did most of my shopping though. I had planned to buy a few games but as usual my plans didn‘t quite survive the ebb and flow of availability at the fair.

As in years past, there are still very few playing areas available. And some were—despite the app now including a working map, thanks Roger—hard to find. It took me 3 attempts to find the 3 tables where Revive was being played in Hall 3. Revive didn‘t sell out as fast as the other games because of MSRP of 80€ (I have since preordered a copy for 55€). There were 2 tables where you could try „The Wolves“ at the Pandasaurus booth (that one sold out completely the first day) and one time I walked past I almost snagged a seat at one of those tables but there was a person standing in my way and someone else was quicker to slide into the seat.

Overall on Thursday I felt there were more people at the fair than prepandemic Thursdays and they were all keen to buy buy buy games. Since huge backpacks are banned you see people with trolleys, huge suitcases, Bollerwagen…

I met a few friends and spent more than an hour talking over coffee with one, and met random strangers during lunch who were highly addicted to Arch Nova. Then in the afternoon I got to meet up with Roger. Friday, I met a different friend group and we walked the halls together sometimes with me explaining the games we walked past because these days I usually know some of the games presented at the fair already (Tindaya was one example this year).

I got to play Terraforming Mars The Dice Game with a teach from Roger at the Indie Games booth and I later got to player Challengers! With some friends and some strangers. I did not buy Challengers! But it was a close thing, the whole tournament thing and deck construction is more fun than I thought it would be. Would definitely play again.

I totally missed seeing a bunch of games I wanted to take a look at and I would love to be able to have the time to go for all 4 days. And I will definitely want to not go alone again. I always thought finding playing spots with 2 was more difficult but it is not.

I have generally gone alone on my previous trips, but it was great to do a bit of seeing the show with @yashima. (I may cut down to five half-day shifts next time from my usual six, and try to get in more demos.) I usually work first shift on Thursday and see the fair on Thursday afternoon, but quite a few things were selling out by lunchtime.

Insider tip: if you are working for a publisher, see if your host company will let you book a parking space in P6b or P6c. €6 per day, and you’re right under Hall 3, so you can slip out, drop your purchases in the car, and come back in. (Obviously you want to arrive fairly early in the day; but if your hotel’s in walking distance, which mine wasn’t, you can just leave the car there full time.) Because I was doing this, I didn’t bring my games trolley at all this year, just one substantial hand-held bag.

The one thing that is wrong with Essen from my perspective is the absence of general play space. Everyone says that evening games happen in hotels, and maybe it’s true, but there’s no way of finding out which hotels. (Also since mine was 20 minutes’ drive away I mostly just went back there in the evening.)

Contrast that with SHUX, which is about 60-70% play space, the rest split between events, vendors, game library, and demos. Of course, SHUX has like 1/50th the attendees, so it’s probably a lot easier to ensure gaming space for everyone.

As can be seen in the picture there is a large empty hall behind the entrance … it couldn‘t be too difficult or expensive to set up a huge gaming area there. It‘s been there for years (they reorganize everything every once in a while). But where would the fair be if people sat down with the 1 game they just acquired to play? They wouldn‘t be buying other games! The fair—so far—has always been a lot (mostly?) about buying and consumption. There are a few gaming areas (that bus in one of my pics) where people can sit down to play any games.

As I do not stay in hotels but with family friends half an hour from Essen, I do not know what happens in the evenings. I hear it used to be that people would gather in hotel conference rooms for games. But with covid BGG forums suggest that practice has been stopped by the hotels who do not want to have to implement covid measures.

I think the organisers of Essen think of themselves as a trade show first, and they need to let the public in to pay the bills but they don’t like it.

UK Games Expo started off mostly as a sales show, with some role-playing hidden off to the side (often in a completely different building some minutes’ walk away). But enough of the senior staff are actually gamers in their real lives that they have been persuaded to provide space for playing games; in the early days it was desperately inadequate but last time I was there (2019) they seemed to be doing all right.

Airecon is much more like the SHUX proportions, and it’s my favourite games show as well as the one I’d recommend to a newcomer to the hobby. (Though I really hope they change the black “players wanted” flags to something more visible against a black tablecloth.)