Episode 70: I'm Not Quite Sure How You Pervert the Halflings

This month, Roger and Mike run through the GURPS Spaceships series, and consider how and when to construct your own setting.

Tunnels and Trolls at the Bundle of Holding, Whartson Hall Aethernauts, the GURPS Spaceships series, the Honor Harrington series, Wives and Sweethearts, GURPS Traveller: Far Trader, The Ragged Astronauts, GURPS Traveller: First In, Transhuman Space, the Starship Operator’s Manual, GURPS Swashbucklers, the book with Napoleonic airships, and the book with the Republican calendar.

We have a tip jar.

(We do get free access to the Bundle of Holding contents, but this happens whether or not we plug them.)

You mentioned my SF setting Flat Black. Like my fantasy setting Gehennum it started as a manageable introduction (about 12 pages of text) and sprouted detail, largely in a “make it up when a player asks” or “let players create stuff” way, until it became vast and unapproachable.

I have written some very condensed introductions to “Flat Black”, in particular for con games.

I think this may be an intrinsic problem with interesting settings: they accrete stuff, which is good in itself, but they can become unmanageable. And I think that some kind of “everybody knows” is vital.

Hey, I liked GURPS Vehicles! The second edition, anyway; the first edition had wayyyyy too much iteration.

The “teenage (para)military heroes” genre and the mecha genre are often mixed, but they really are separate things. Mecha are still silly, but they can be their own kind of silly without tossing in teenage girls and the Power of Lurve.

One of the more reasonable ideas for a space combat paradigm, IMHO, is actually Traveller’s Battle Rider concept: You can’t fight in jumpspace, so you have big honking starships that carry a handful of slightly less big, slightly less honking spaceships with souped up maneuver drives and armor instead of jump drives.

What Roger is proposing for PDFs gives me flashbacks to the 80s and copying whole articles from Dragon magazine for my D&D games. I don’t quite have all the GURPS PDFs, but I can see the utility of a program like that.

I’m currently playing in a game where I strongly suspect there are areas that don’t exist because the Creator(s) haven’t defined them yet. Then again, I also strongly suspect the entire world is a collection of characters from rejected works of fiction . . . (Although I’m trying to work out how the lead family from a sitcom that just finished a multi-season run this year fits with that theory.)

Terry Brooks’ The Sword of Shannara was pretty much all but explicitly a rewrite of The Lord of the Rings from a different philosophical angle. I’m less sure what his philosophical angle was than I am what Professor Tolkien’s was though. Vaguely American individualism with a bit of an anti-technology theme and more than a hint of “some people are born to lead and it’s irresponsible for them not to?”

Surely in a Royal Navy in Space game the space station governors are going to be titled peers, or at least knights, and therefore the proper forms of address would depend on their other titles.

A few parallel names are completely OK. Ken is a common Japanese name, after all. Besides, even Professor Tolkien cheated - there’s an appendix where he explains that “Samwise” is an Anglicization of an actual hobbit name, and of course the Hobbits didn’t use the Gregorian calendar with English month names.

One idea I had for a campaign that hasn’t gotten off the ground was to just give a glossary of important concepts and names. So there would be entries like “Earth: Mythical homeworld of the Human (q.v.) species. Humans: Most common sapient species in the Five Galaxies (q.v.). Five Galaxies: The five most explored and civilized galaxies, the core of known space. Metasapients: Sapients possessing powers or capabilities which manifest in less than one in a million members of their species; a.k.a. ‘Metas’ or ‘Supers.’” A few more of those and the general outline of my Babylon 5 meets Battlestar Galactica meets Legion of Superheroes setting starts to form - certainly in enough detail for players to start coming up with character concepts.

I tend to use SI for most significant computations, but a system based on an inaccurate measurement of 10^-7*(distance from pole to equator on this planet) isn’t inherently superior to a system based on 10^4 double paces of a Roman legionary.

Furthermore, SI is mostly base-10, which has the advantage of consistency, but the disadvantage that it doesn’t really work as well as either base-2^N or base-12, other than for arbitrary historical reasons.

And both use a time measurement that is 1/86400 of a slightly inaccurate measure of the solar (not sidereal) day of an arbitrary planet circling an insignificant star about 10kpc from the galactic core.

If you want something more universal, I’d start by using some convenient base-12 multiple of the Lyman-Alpha wavelength and frequency for distance and time bases and derive other units from there. That would require some retraining of people currently using SI, but since most of those people are entirely willing to impose essentially the same burden on people currently using imperial, I’m afraid that doesn’t much worry me. 9-)

But then I’ve been known to use N*s^2/kg as a unit of length, so take that for what you will.

I quite like the old SPI (Ares) game Star Traders as a fairly simple but believable economic simulator. For each of the six significant trade goods, each planet has an economic track that decreases the price for quantities sold, increases them for quantities purchased, and has further movement for each turn based on inherent supply-demand ratios for the system.

I don’t know that the game is all that good as a competitive game (it’s a very SPI game), but as a scenario generator for a roleplaying game, I think it has quite a bit of promise. Certainly the economic tracking mechanisms could be adapted easily to that purpose.

I tend to use SI for most significant computations, but a system based on an inaccurate measurement of 10^-7*(distance from pole to equator on this planet) isn’t inherently superior to a system based on 10^4 double paces of a Roman legionary.

It isn’t the basis that makes it more convenient. It is the consistency. The US Customary system and the Imperial system have an insane profusion of internal conversion factors and a bewildering array of different units with the same names. Quick! How many gallons in a cubic chain? 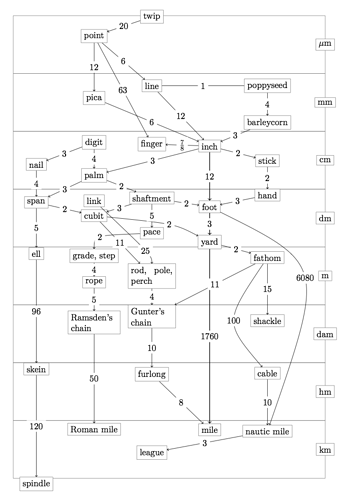 @MrTim: this is more 1950s RN than 1800s RN, so while there are titles involved they’re relatively unimportant. (There has been much discussion about how the officer/enlisted dynamic works when you have truly universal education and nobody has to join up just to have enough to eat and somewhere to live.)

@Doug.Sundseth: I do in fact prefer the sizes of Imperial units for every-day things, and because I have a secret weapon (the units program) I can work with them with no problem.

However, what I despise for GURPS Spaceships in particular is the simplification that leads to a formula such as:

where cD is a distance in AU, T is in hours, and A is in gravities. Do it in SI, and it’s just

which falls directly out of integrating distance over time – and scaling units up or down is automatic, as you’re already used to using something like 1.5×10⁸ km for a distance rather than converting between miles and AU and light years depending on the size of the thing you’re working with.

Did you use Gunter’s chain or Ramsden’s chain? Are those US fluid gallons or US dry gallons? Are you sure that you shouldn’t have used Imperial gallons?

And next I’m going to ask you how many feet there are in a nautical mile.

Did you use Gunter’s chain or Ramsden’s chain?

Are those US fluid gallons or US dry gallons?

Fluid, which is a workable default; based on the British wine gallon of 1707.

Are you sure that you shouldn’t have used Imperial gallons?

At least I didn’t bring slugs into it…

And next I’m going to ask you how many feet there are in a nautical mile.

That will depend on date and governing polity, until 1970.

At least I didn’t bring slugs into it…

Or poundals. Or fourteen different units (some volume, some mass) called “barrel”.

Much of the point of those older units is that there is one for every task and as long as you’re doing that task in the usual way, they work great. (Sort of the Apple computer of measurement systems.

) And nobody cares about converting between cubic leagues and fluid ounces because that’s not a task that anybody would want to do. (For some value of “anybody”.) Just as nobody every really wants to measure volumes in N3s6/kg3.

I do enough work where dimensional analysis is useful that I don’t often use imperial/traditional units for complex tasks, because SI (or cgs, since I was trained as an astrophysicist) is simpler for those tasks. But if I want a glass of water, it’s likely to be in the 8-16 fl. oz. range, not the 250 - 500ml range.

And because I’m a cranky middle (?) aged man, when somebody complains about the units I use, I start using Kelvin (or Rankine if I’m really grumpy) for temps and Newtons for weight, because they’re the correct units and because very few of the people who complain understand why that’s so.

Oh, I almost forgot: doesn’t Warhammer Fantasy Roleplay do a solid job of perverting the halflings by making them all or nearly all thieving gluttons? (Admittedly my first thought was Mary Gentle’s Grunts, but that’s more a case of perverted halflings . . . )

Is everyone not familiar with the “boggies” in Harvard Lampoon’s Bored of the Rings?

@Doug.Sundseth: cgs scares me. It’s like that mode of horror where everything looks familiar but is just subtly wrong somehow.

If you really want to annoy people, use Delisle, which intuitively goes down with increasing temperature. (So did Celsius, originally.)

@MrTim: Certainly halflings in my games tend to be thieves, pimps, gluttons and/or trebuchet ammunition.

Tunnels and Trolls has long had Black Hobbits (as in black hearted rather than black skinned) and they’re nasty pieces of work. Ken St. Andre acknowledges that Bored of the Rings was an influence on the game.

Regarding showing your homebrew world to someone before the campaign, Michael, you can use A&E for this purpose (assuming you don’t need feedback in less than 2 months).

I do enough work where dimensional analysis is useful that I don’t often use imperial/traditional units for complex tasks, because SI (or cgs, since I was trained as an astrophysicist) is simpler for those tasks. But if I want a glass of water, it’s likely to be in the 8-16 fl. oz. range, not the 250 - 500ml range.

I’ve disliked cgs since I saw its use in The Anthropic Cosmological Principle, with electrical units containing square roots of mass, length, and/or time; it seems vastly more elegant to have a separate fundamental electrical unit, as in mksA. And it’s been a while, but it seemed as if Barrow and Tipler drew unphysical conclusions based on cgs identities that treated some of the electrical constants as dimensionless. On the other hand, I do like dimensional analysis as a way to get a head start on a problem.