Well, Gale Force 9 are saying “it’s not a new edition” and “It’s not just a re-skin for the film.”

(Man, if the film tanks, so many tie-in projects are going down…)

But the new… “version”?… is going to be maximum four players, 30-60 minutes play time, etc. So if you want the big scary original-ish version now might be a good time to pick up a copy. 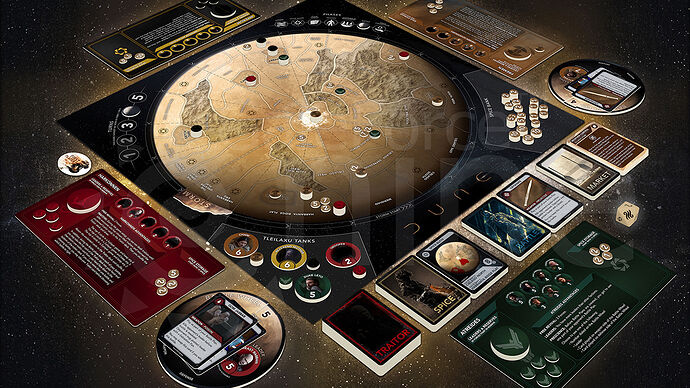 The classic Dune board game is getting a shorter, simpler new edition this...

Seems like a Martin Wallace approach to 1st/2nd editions. Good to see they re-released the original first to escape the uproar of the streamlined version losing everything good in the old version… and possibly lead to a more honest less knee jerky response from the community.

I’m very intrigued. I’m glad the original is available again so I don’t mind what they do with this one.

There’s definitely a gap for a more accessible game that plays well at 2 and doesn’t take 5 hours. (Having a movie reskin doesn’t interest me, but that’s fine). Could be the difference between convincing other people to get it to the table or not.

Given that they say there are four factions in the core game, I could definitely see more of those coming out as expansions. Whether they’ll say “and increase your player count” or “swap them in to replace core game factions” is less clear; their Doctor Who game does the latter, and Firefly was never officially for more than four.

With it being modelled on the old game but in a more modern format, I’d bet money on it. Having a base game of 4p to reassure people it’s not too complicated, and then using expansions to add more complexity is a very modern approach to get this version ‘nearer’ the original without intimidation. And 4p provides room for two expansions, which is probably what they’re hoping for if this is a success.

I am already throwing money at my computer screen.

It has the word “Dune” on it. Everything else? Irrelevant.

Looks juicy, and considering I have Rex already in my collection (still un-played), a shorter version could be welcome, once I see what reviews are saying…

EDIT: By the way, looks like the 4 factions have Atreides, Fremen, Harkonnen and… is that Emperor?? It looks blurry when zoomed in.

Re-EDIT: Ignore my question. Imperium it is, my work computer was just slow…