Apparently everyone else has known about this for 48 hours already, but Dire Wolf, who co-made Clank!, are bringing out a new DUNE game to coincide with the movie release.

No details at all yet, except the line “Deck-building meets worker placement in a new board game of galactic struggle”.

Movie tie-ins to a fixed schedule are often bad, and this is sadly not connected at all to the other Dune boardgame, but a lot of people love Clank! so who knows? So Dune Imperium is less like Twilight Imperium than Dune is?

Twilight Imperium is the game about warring vampires that sparkle when in sunlight, right? Sequel to Twilight Struggle?

So I don’t see why Dune Imperium would be like Twilight Imperium.

Considering that in Dune only the one country does really matter…

It does make some sense…

Eh, Arrakis gets handed as a prize to the strongest House by the Emperor, so fighting over the whole Galaxy / Empire / To be the Emperor does make sense.

Except when they hand it as a trap to a minor House to make their rival get rid of them, because they’re afraid of the Atreides semi-precog abilities. For example. Then it’s… trickier.

Yes, I will buy any game linked to the Dune IP, yes.

The joke has been made before, but it is worth repeating here: when it comes to this Dune game, all I really want to know is… what is in the box? 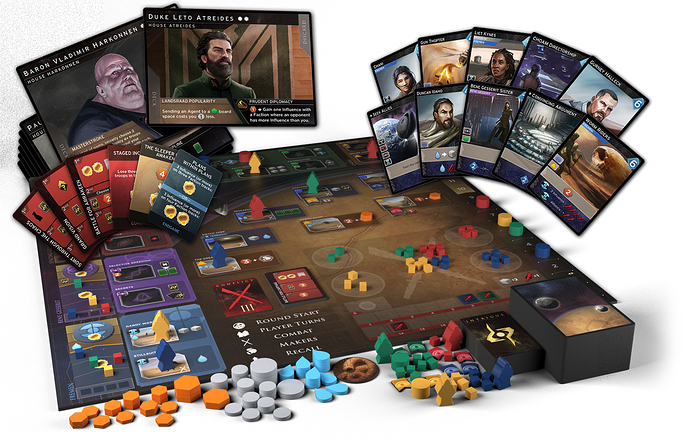 I’m not going to post every update, but the first Designer Diary actually shows that they’ve thought about this a lot more than just putting together a property for the movie tie-in.

They took steps to be different from the GaleForce9 board game, and went back to start again when their first version wasn’t good enough. They clearly know the book/movie enough to put appropriate amounts of intrigue in, etc. They want a deckbuilding engine AND area control wargame on Arrakis.

Diary 2 shows half the game board, and some of the cards. They look very simple indeed, with nice art and then only one symbol on the bottom. The whole thing does look entry-level so far, which could be deliberate to get fans in, but it’s early days yet.

Thanks for this. I never actually read the first one, and forgot that “diary” implied there would be more.

Probably the final designer diary is up, and I wasn’t going to post about it but I was impressed with this bit:

“one of the goals for Dune: Imperium ’s design was to avoid treading on familiar gameplay territory established by the classic Dune board game. And because that game excels with high player counts, we focused on a game that plays well with four or fewer players”

“one of the most important goals I had for the automated opponents was simplicity of running them. I am not fond of automated opponents where you must go through a series of rules to achieve a “relatively smart” play. I’d rather have the opponent play somewhat randomly but fast, as long as on average , it makes reasonable plays and the sum of its parts provides a reasonable challenge. I started a thread on boardgamegeek.com and asked people about their preferences there, including a question about fidelity of play vs. ease of play. I got a sense that this approach was going to satisfy most of the respondents, as gamers commonly request a balance of both ease of play and fidelity, and not too many people value fidelity high and ease of play low.”

As I’ve said we can’t tell if it’ll be any good, but I’m intrigued at a game where the solution to making the solo and two-player work better is to use automated opponents to always bring it up to at least three ‘players’. And they’ve made an app to handle those automated players. I’m quite liking how much thought has gone into it instead of relying on the name. 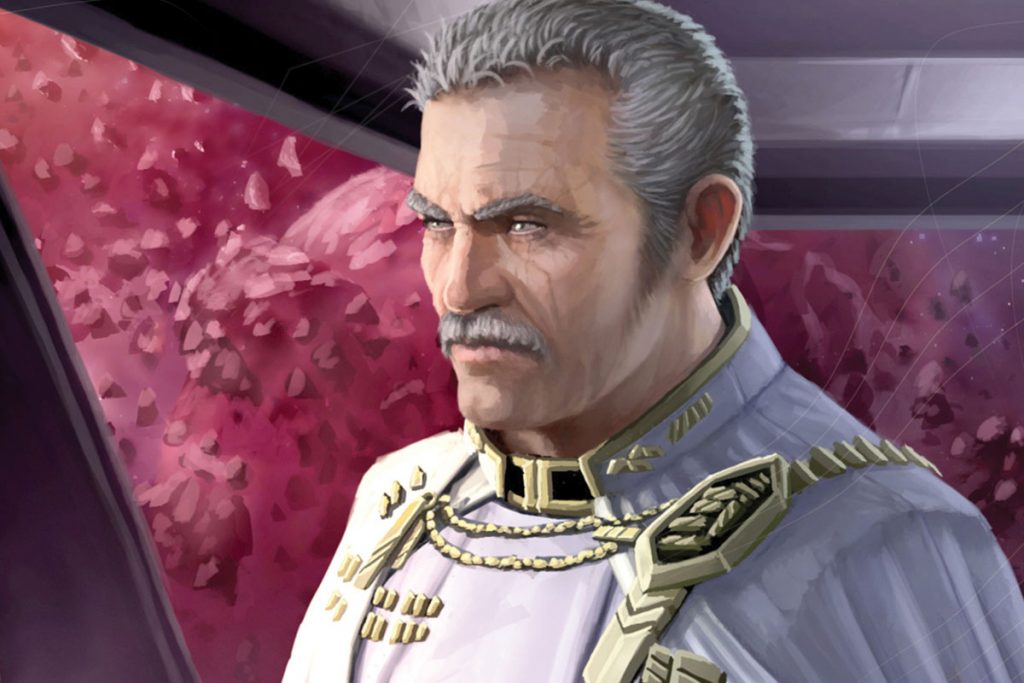 Dice Tower reviewed the game, and said exactly what I thought: the art design of the board is freaking terrible. Not just the big blank spaces, but the (I’m guessing spaceship?) intruding from the top left into the planet circle. I hate it! I can’t take my eyes off it, it spoils all the curves! Aaargh, I really hope they change it if there’s a 2nd edition eventually.

Did they love the rest of it though? Watch here: 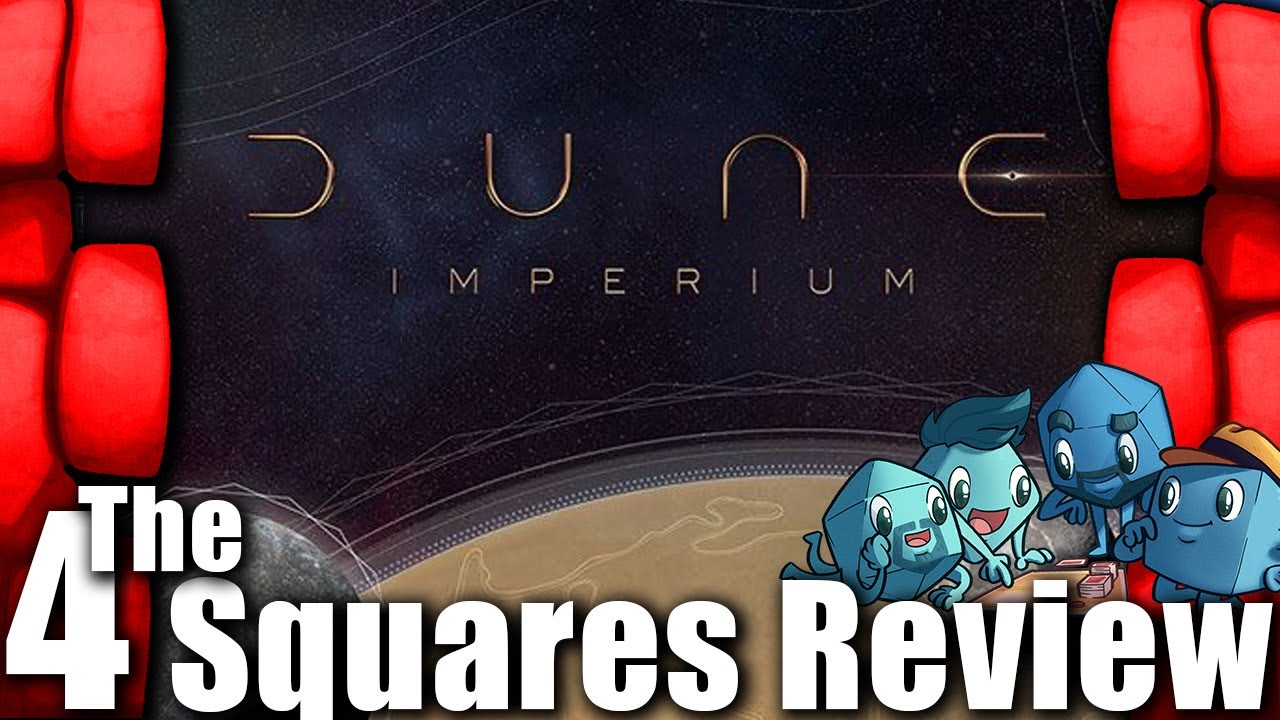 Has anyone listened to the Susd podcast on this one yet?

I haven’t played the game yet, it is not available over here yet and even if I were to preorder now, it is entirely possible i will miss the first round.

Despite Ava and Tom not liking it much, the things Matt is saying make me want to play. He makes a point of being a tactical vs strategic player and I think I fall more into the tactical side with most games.

I’ve listened. It’s firmly in my try-it-first box; the theme is a negative for me and I’m not hearing of any amazing gameplay innovations to overcome that.

I think deck building as a mechanic is quite limiting to a game. Even though I haven’t played it, I feel like I have after listening to the podcast. Deckbuilders almost always fundamentally rely on the same tricks (collect a set of these, these cards helps you mill your deck, collect resource cards early game and switch to VP cards mid-late game). Whether it’s Tyrants of the Underdark or Clank, the stuff on the board always feels secondary to the same old card play.

Not that it’s a bad thing, but it’s certainly a ‘pick the one you like and stick with it’ issue - there’s just not enough variation from the accepted tropes. I think Great Western Trail is the closest a game can get to a deckbuilder without it feeling like another deck builder.

I love deckbuilders, but the only one that actually felt fresh to me was Quest for El Dorado. It didn’t even feel the need to have you “draw five cards, discard everything” just because Dominion did it.

As for Dune Imperium, a game I want to shorten the name of but can’t because it’s neither Dune not Imperium, I feel like it’s one of those games made of generic boardgamey things, which if you stripped away all the preconceptions, it would fall flat. What if it wasn’t a “worker-placement deckbuilder set in the Dune universe”, and was just a game? Wouldn’t it just be a bad game?

And just to confuse matters there’s also Imperius (which I feel I’d like to enjoy, but I need to play it a bunch before I understand it enough to enjoy it).

I think there is a decent looking TTS mod and I plan to have a closer look before buying as well.

I must admit after listening to the podcast, I wasn’t any more or less interested than before listening to it. If I wanted a Dune themed game, I’d go for the 2019 edition of the old version. That appeals to me way more than a deck builder.

The amount that other reviewers absolutely love it (especially 3-4 from Dice Tower) and the number of top 3 of 2020 lists it’s in, make me think the frequent comment of “The deck building and worker placement and X work together really well” must have something to it, and it probably is good and fun.

The theme is a plus for me (would have been more if the movie had come out on time with the art that resembles the actors).

But it’s SO ruthless that I want to see how it plays with the public for a bit before buying.