I feel like we needed a space to show and tell about our recent RPG-related purchases. There’s something a little more intimate about the selection process for role playing materials and I’m always interested in seeing what has caught a player or GM’s eye—and what they intend to do with it.

I made a ton of Black Friday purchases and backed a few late year Kickstarters, so I’ll have some fun stuff coming in for a while, but my purchases are normally few and far between. I’ve fallen head over heels for Troika!, though, and this is the result of that (so far): 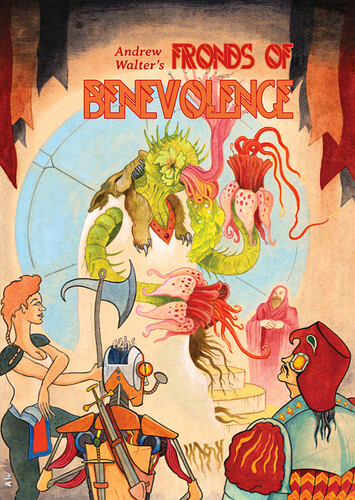 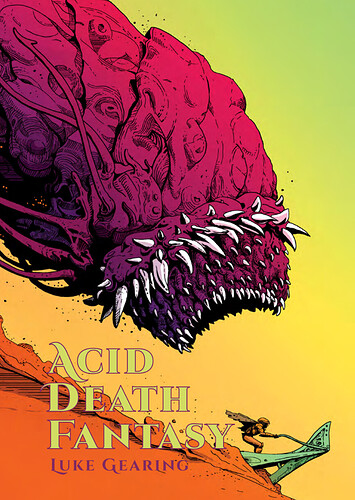 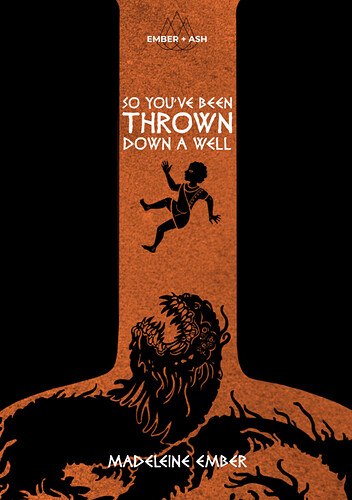 I’m running a slow-play PbP game of So You’ve Been Thrown Down a Well on Discord and, a few initial hiccups with a since-departed player aside, having a great time with it!

I got the Troika! rules book and So You’ve Been Thrown Down a Well recently, and both of them are gorgeous and evocative. There’s so much flavour and it’s so odd. Slightly unsure on some of the rules but looking forward to exploring the game with agroup. The starter adventure in the rules book is great and seems very tight and silly.

What I’m learning so far is that the game lives and dies on its character and enemy/NPC descriptions. It’s the main point of world-building, which I think is really cool. It also makes it bewildering, of course, but I love the idea that what Troika “is” will largely be dictated by the interpretations of the entire table.

I mostly stick to a couple of games and then buy everything for it. And I’m pretty mainstream at the moment. The stuff that Cubicle 7 is coming out with for Warhammer Fantasy Roleplay 4th Edition is just beautiful. Although a lot of it is a retread and update of previously released material, I only played 1st edition as a kid and haven’t seen a lot of it before. The pdfs that are coming out thick and fast but I’m really waiting for the hard copies - I don’t really like reading pdfs. (also they tend to publish the pdf early so there are often bits missing etc that get fixed for the main print). 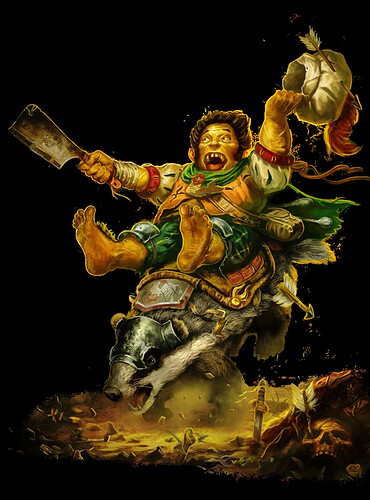 I want to buy Paranoia again but not sure which edition I first played years ago. I’ve heard good things about the latest edition which I think is still in print so might just plump for that one. 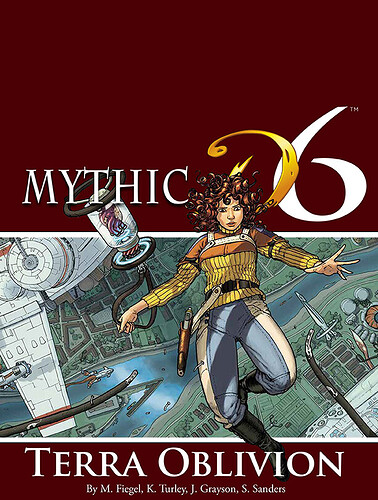 I also recently bought The Company, which I wanted to get aeons ago but was out of print. 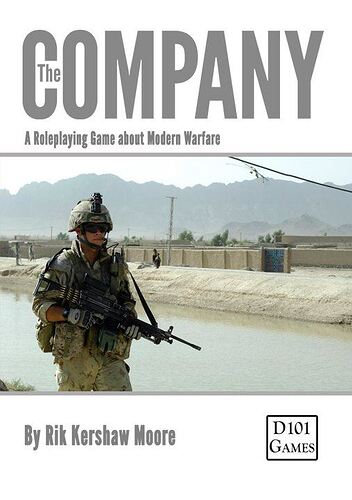 I haven’t read either of them yet.

I spotted “an RPG about modern warfare” and thought “I hope Dr Bob knows about this”… then saw who’d posted it. Interested in your thoughts - lots of games talk about whether you die when you’re shot by an M-16, not many talk about the psychology.

Terra Oblivion is a gorgeous book to look through. Quite a nicely different setting, too.

I haven’t read The Company yet. The only psychology I spotted when I was flicking thru going “ooh look at all the tables” was some optional rules on suffering PTSD/mental trauma when something horrific happens.

I let you know when I’ve had a proper read, but it is currently behind Mythic D6 and Terra Oblivion in the queue.

I picked up The Bitter Reach for Forbidden Lands very recently, and finally got around to picking up Crypt of the Mellified Mage today. My FL collection is getting into the decades of content range, but I just can’t help myself. I love this setting and its loop.

…I can’t wait to play it eventually. 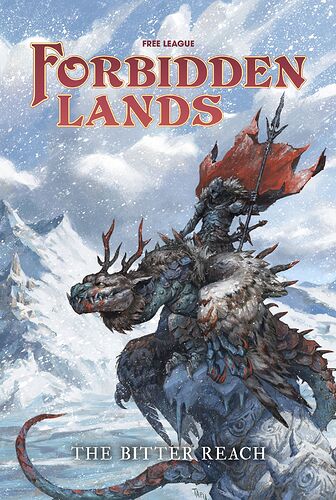 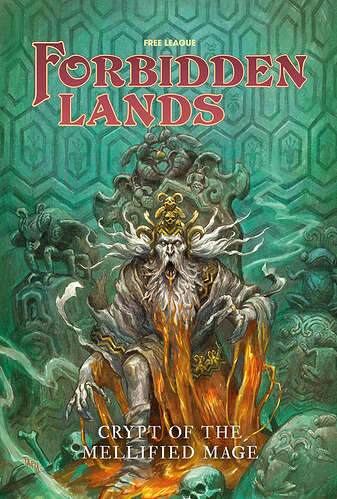 Gosh, it looks like Forbidden Lands does have a lot of luxurious looking bits available. The starter box seems decent value as well. Does the worldbuilding hold up to the production values? Looks intriguing but I couldn’t find samples online.

The worldbuilding is probably it’s strongest element, actually. The books lay out a detailed history, geography, key players and locations, but leave it all vague enough to be used in basically any way you see fit. This isn’t unique, per se, but the level of detail paired with only the loosest suggestions with regard to how it should all play out is tantalizing.

[EDIT] I really shouldn’t gloss over the value comment. I have all of the books for this game so far. Not counting the dice sets (which are always an extravagance), I’ve paid maybe $200 total from my FLGS, representing about 1500 pages of content.

[Double EDIT] I may have officially gone nuts but I feel like this bundle is worth a blast:

Mothership 3rd Party Mega Bundle by Ian Yusem and 10 others

Hm, you might have sold me on it then. I’ll have to pick up the starter set next year at some point…

I picked up a copy of Lamentations of the Flame Princess to have a look at the way it deals with magic, since it seems to have some pretty interesting spells 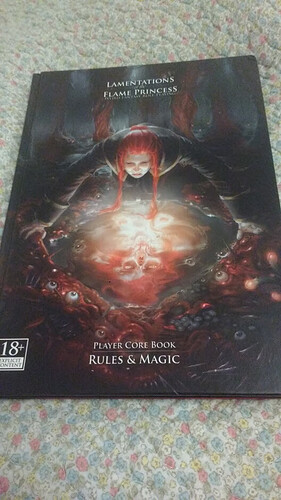 I also picked up a couple of micro-settings from indie creator Lazy Litch: 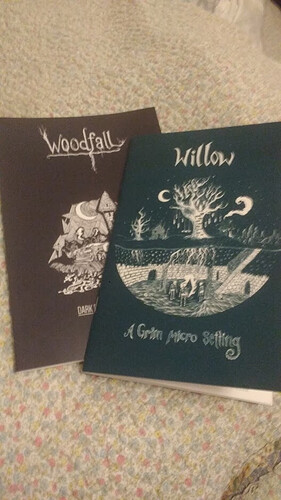 At the moment I’m not actually playing any RPGs (we were playing remotely for a while but switched to PC games) so any new purchases are purely to read and enjoy by myself. I’m toying with the idea of writing my own world in some form or another so trying to figure out what interests me most.

I’ve heard really good things about the Flame Princess books. I don’t know an awful lot about it beyond second-hand goodwill, but it certainly gets mentioned a lot.

If you wanted to just dip your toes into Forbidden Lands, the two smaller setting books are pretty cheap (though the worst value propositions among the books, page for page) and they largely follow the structure of the core books and campaign settings. That said, the core box set really is a bargain, and IMO the system itself is well worth a perusal. Some pretty neat stuff in there.

Repeated from the Last Game You Bought thread:

I just received the complete 1984 boxed set of Larry Niven’s Ringworld RPG by Chaosium Inc. I’ve been looking for an excellent condition example for many years and finally located one that wasn’t too tattered and worn for my tastes. It also held a welcome surprise: the separately published Ringworld Companion. It wasn’t mentioned in the description, and I was planning on continuing my hunt for a copy of that as well, but now I don’t have to. I am not really into role playing games, but this is almost a “must have” for anybody who’s into the Ringworld and Known Space books. I’m extremely pleased with this! 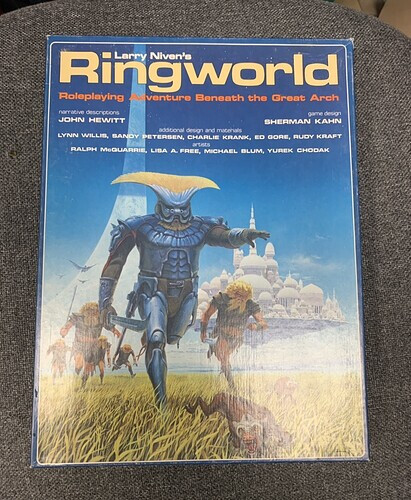 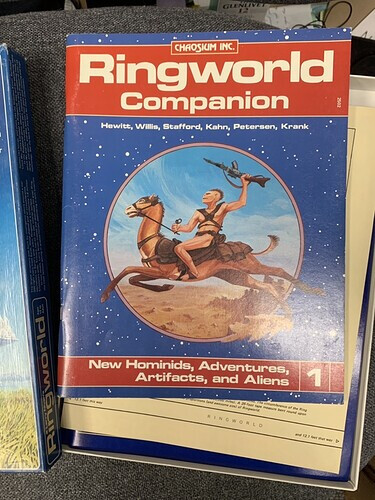 I don’t have much to add beyond “wow”, those are in great shape! Also I’m a big supporter of collecting RPG books for worlds and universes you’re a fan of, whether you plan to play/run them or not. Good ones can be as easy to get lost in as their source material.

Oh yes. Literature-based RPGs generally contain lots of great info in discreet, well-laid out sections, so one doesn’t have to leaf through novels looking for a half-forgotten snippet or description.

Indeed, the tech, biology, and other background info found in this set were given out to be used as the “Bible” for the various authors of the Man-Kzin Wars series of books.

Nifty! I remember holding a copy in my hands in Games Workshop when it had just come out, but it was awfully expensive…

Well I’ve started reading it. The psychology was doing well. But then it was ambushed by male entitlement (The Company was founded at a meeting in an exclusive Gentlemen’s Club, so teh rich patriotic wimmenz need not apply), and while male entitlement held it down it was kicked in the teeth by the male gaze.

Here within the hallowed walls, four men were shown into a tiny private dining room, by servants known for their discretion and beauty.

So the sort of place that would feature on MeToo items on the national news. And in employment discrimination tribunals. “Yes, I know Janet and John are the best maitre d’s in London, but she’s rather plain and he’s a bloke, so we decided to employ a supermodel instead.”

Thus the Oath of Service stuff about not acting outside the law and acting in an honourable and professional manner rings a bit hollow.

High Heid Yin he say: Do what I say,not what I do. 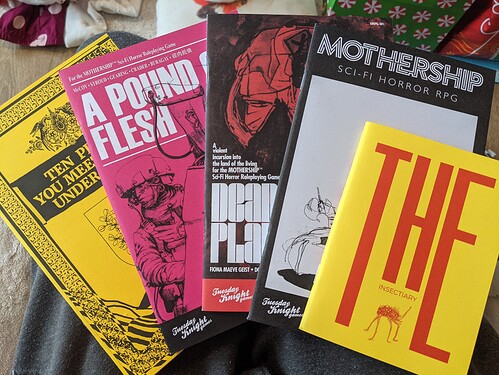 First glut of goodies showed up late yesterday afternoon. Merry Christmas to me!! (And Happy Holidays all!!

[EDIT] Not pictured here was my copy of Troikafeld. It turns out it didn’t get a PDF and there “never will be” so I got kinda precious about it suddenly and gave it the sealed bag-and-board treatment as soon as I was done leafing through. 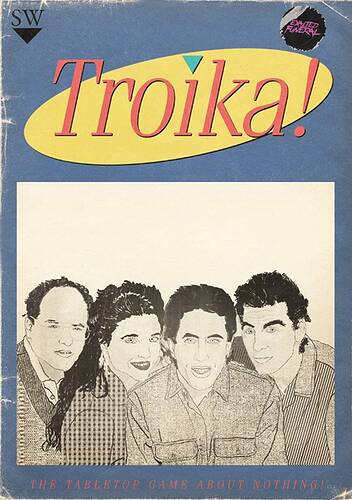 This showed up from the UK today, which is awesome but more than a little disconcerting considering Acid Death Fantasy still hasn’t shown up from the US and was shipped weeks earlier. Hopefully in the next few days. 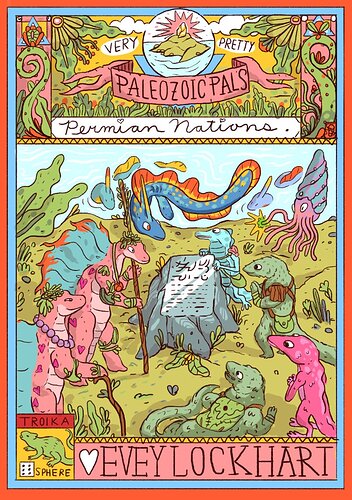