Asmodee does the right thing‽

Asmodee have said to Gen Con “have the physical event all you like, but we aren’t going to be there”. I think this is the first action I’ve seen them take that was inconsistent with maximising short-term profit. 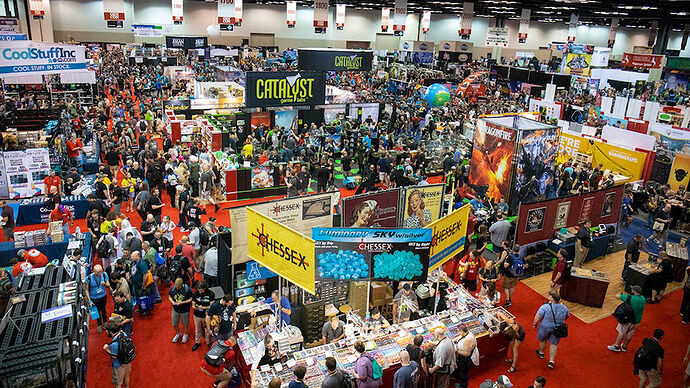 But if Asmodee do anything I’m like fuck you Asmodee.

There’s apparently quite few other bigger names dropping it as well. I wonder if it’s a slow shift to conventions where playing matters more.(Massive Hyperbole there)

I chalked it up to them looking at insurance coverage for any employees they sent.

But maybe it was just a standup move

I’m wondering if Asmodee will do the ‘E3 thing’ of using this as an excuse to start their own independent con next year separate from Gen Con. Maybe even do a parallel event in a nearby centre for the full on E3 copycat. The only thing holding them back is that a lot more space is needed for board games compared to video games, so is it worth the expense for a big power play?

“We didn’t do Gencon last year and everything was fine” is a very business excuse to use for shareholders.

A broken clock is right twice a day. Just because for once they do the obviously right thing (is it though? I have no idea, here several large scale events are still being planned to happen), doesn’t mean that I am not still miffed about the way they do business or treat customers or shops.

But they’re distinctly not equal in my head.

I suspect it the insurance issue flagged above more than anything

The general feeling among people I know round here is “why not just admit that Essen Spiel isn’t going to happen”. Do people feel differently in Germany?

(I know nobody with any enthusiasm for the socially-distanced UK Games Expo, either publishers or buyers.)

Personally, when I switch on my rational side for a moment I know I should not even consider going because vaccinations or not… unless they severely restrict number of visitors it is just a bad idea™

Apparently, Wacken was canceled… last I know from the festival we have tickets for from last year that one is still on.

We are in a different stage of pandemic than UK. Our vaccination campaign is still on a steep upward trajectory and we have yet to get to the point where we realize it won’t magically make covid disappear anytime soon.

Ps: also US seems to be leveling out at 50% vaccinations. Despite getting there early that just isn’t enough and may also play a role. Here it is expected we’ll get to 70-75% easily if there is enough vaccine and from numbers that are to be delivered in the coming months there will be enough.

Pps: so the Spiel website says nothing except the date and tickets will be available in August.

I know nobody with any enthusiasm for the socially-distanced UK Games Expo, either publishers or buyers.

Yeh, I’m not even considering going to it. Thought Bubble in November is a hopeful maybe. A lot can happen in 6 months - good or bad.

Though it’s not looking good as the government have just (stealthily??) advised people don’t leave Leicester

I’m waiting for the ‘don’t leave Bolton’ notice to extend to the rest of Greater Manchester, as it has for the last year.

The team behind SPIEL are pretty vocal about their conviction that the convention is going to happen this year. I’m curious if Asmodee will issue a statement regarding Essen as well. I couldn’t say how SPIEL and GenCon compare but the former is known for overcrowded hallways and way too many people in general. I can’t really imagine that it’s actually going to happen, but I guess we’ll see.

Bizarrely the government went from an apparent legislation to advice to completely removing it within a day.