(They may not have phrased it that way, but I know what they’re telling me.)

I have got a similar one from Kickstarter… -.- that was a while ago. I have backed more Kickstarters since then.

So I managed to offload 80-90 percent of my collection now. Managed to give them to a few charities around my local area and someone intends to sell them to raise them for a local autistic charity. I feel relieved. Obviously it suggests a lot of wasted money but hopefully I can be more careful now with my money.

Just got a few bits and bobs. For some reason I felt like keeping Castles of Tuscany. My partner and I have been enjoying that over the last few days.

Obviously it suggests a lot of wasted money but hopefully I can be more careful now with my money.

Not necessarily. Did you play the games and get any enjoyment out of them? It isn’t a waste of money to pay for a ticket to a one shot event of any type so I don’t see why it should be a waste of money to pay for an item, get enjoyment out of it for a time, then move it along to someone else once done with it. Not everything has to give enjoyment forever in order to justify its purchase price.

Haha there is a lot of regret in there. Even the kickstarters where I felt I’ll enjoy the metal coins sometimes were Unplayed. I think sometimes I should make purchases with a cooler head - Yashima’s orange flags above almost apply to a one to me and should be the kind of red flags to me!

I think at best the pleasure I got out of some of the worst offenders was the excitement of the kickstarer and punching the games out but even then once the kickstarter was over I never felt excited about the game on delivery a lot of times times (horrible guests and chronicles of crime).

I don’t mind really. My folly hasn’t ruined my life I think so I’m not too sad about it and hopefully some others get get a bit of pleasure that they couldn’t/wouldn’t have so I’m not going to dwell on it a lot in a bad way.

@mistercrayon It feels good to let go of all the regretted purchases, doesn’t it? I am trying to learn from those… not always successfully.

My own efforts… have stalled a bit, due to 2 migraines last month I think. 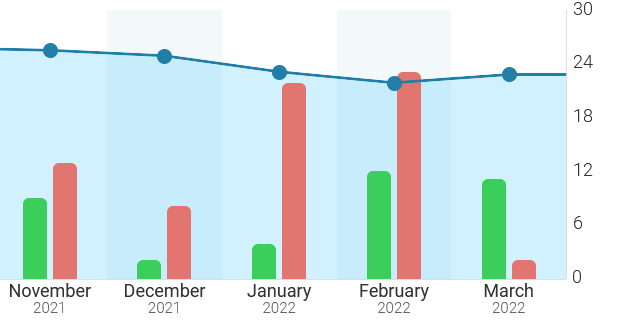 11 games in. Though that includes 1 replacement for a purged game, 2 Kickstarters and 3 Preorders and from last year before November which were already counted in my collection (in my personal count anything preordered or kickstarted counts towards my desired maximum game count)

But that means I still managed to acquire 5 games that I did not plan for:

The 3 big ones (Ankh, Arnak und Sleepy Gods) were all in one big go after a hugely frustrating experience… and I am already more or less regretting Ankh and Sleeping Gods. Although in my defense I got Ankh so cheap I expect to be able to sell it for above what I paid. Sleeping Gods taught me a valuable lesson that I need to be wary of campaign games and so that is probably worth something, too. Also neither is on the current sell-stack.

I am really happy about Flippermania, Arnak and Red Cathedral though.

I am planning to donate the games that have been tough to sell within the next two weeks to make up for March.

Yeah it’s a nice relief having more space in the house and using up £100 a month for something I “might” go back to.

I think a thing that did help was having the items out of sight. It really does show I could live without them and not even think about them for a long time. There was not a moment when I went “oh I can just go to storage and grab this” and then went to storage to get it which made me really consider if I needed it at all.

Hopefully I’m getting to a mindset where me and my partner can settle into something cool now and just enjoy it a lot but I know there’s a bit of me that really enjoys the thrill of novelty.

Yeah it’s a nice relief having more space in the house and using up £100 a month for something I “might” go back to.

Can I ask how many games you got rid of that you had to pay 100 for storage?

I know there’s a bit of me that really enjoys the thrill of novelty.

Same, same. Sometimes it helps to play stuff before buying it. But this is not always feasible. I am looking forward to going to SPIEL again. Although I have made a bunch of overly optimistic purchases every single time I was there… so that’s dangerous, too. 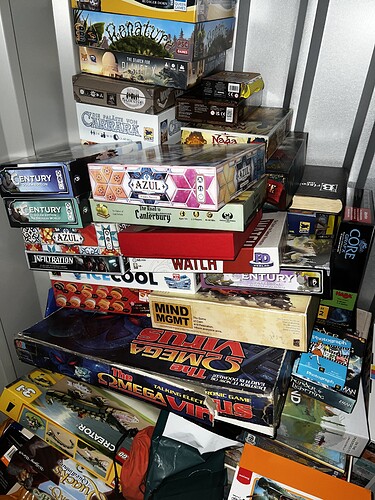 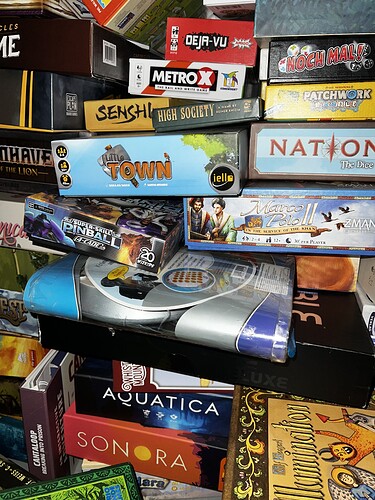 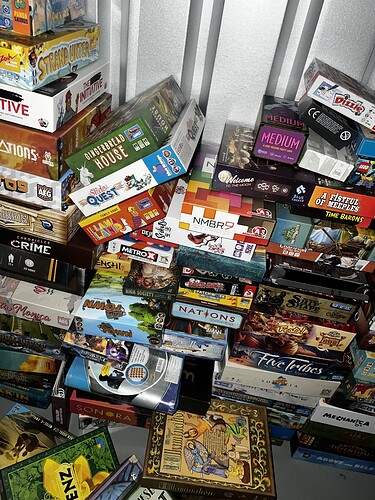 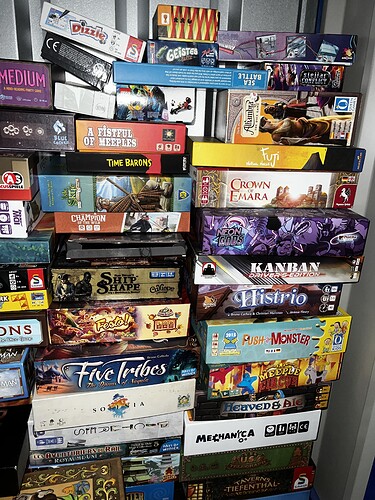 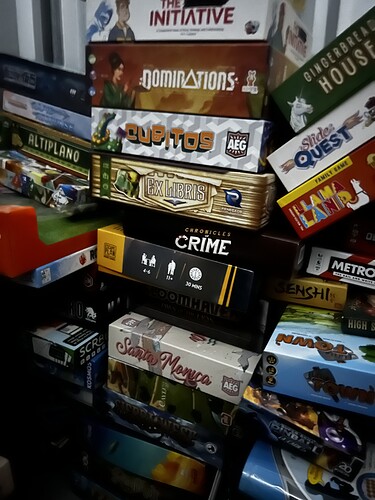 Not sure but this is them in the space I was using.

Is the person selling them for you for charity in Cardiff?

I had a dream last night that I had gotten rid of a couple of games, and was thinking, “Hey, I can finally post something in here!”

I do have a few boxes on the chopping block, but have not yet posted them for sale or anything yet.

Yeah it was someone who’s mum works for a local autism charity. They’re going to process them so hopefully it’ll show up on Facebook at some point - but I think they have a group of willing purchasers.

So my collection size hovers around 200 +/- a few. Not counting the ones listed for selling/trading (I sell much more than I trade), not counting the games that I am keeping for purposes other than playing (in many cases the reason is similar to “this is basically my partner’s game, I don’t want him to get mad at me for getting rid of 7th Continent”).

It turns out I am far too curious about new games. So I need to keep selling games as well and maybe one day my collection will contain only games that I really want to play given the right context/group.

On average, my happiness with the games I have has increased, there are fewer and fewer games on the shelves that I feel “meh” about and more and more I really want to play (more).

I am also learning to recognize the games that I “kind of” want to play but don’t play. @VictorViper recently mentioned something that sounded similar in another thread. Games I really want to get to play but when the time comes to set up a solo or convince my partner… somehow they do not make it and I choose something else instead. There are a variety of reasons for this

These games eventually end up on the sell pile. I can already see some games being pulled over there.

I think 200 is the number I am aiming to stay at for the forseeable future. Eventually, I want to downsize further. Right now, 200 seems ok.

Remember I keep a very tight collection with almost no emotional attachment whatsoever. I boot games off the shelf constantly, but I think that should be relative to the collection you want to maintain.

Don’t be too hasty, basically (though I’ll always encourage paring down; It’s good for the grey matter). All your points come with caveats:

Here’s one that I’ll add. It’s vague but it’s simple and personal, so it works: If owning it is burdensome in some way, let it go.

Oh most definitely. I was talking this week about the phenomenon that I referenced (in my mind) above. When I bring games to a table, I want to have played the game before. Now this is a conundrum… some games cannot be easily played solo/multi-handed and those are the games I have trouble getting to the table: Modern Art, Hansa Teutonica, Iberian Gauge… all those 3+ player games. I do not have a solution to that. I learn the rules before game night, put the game in with all the others I have (brought) along and then we end up playing something I am more comfortable praising because I have played it a few times.

For my own downsizing aims I was looking to reduce to 100 games. I’m currently on 111 with 3 on pre-order/crowd funding. Thing is I only have 1 on my sell list currently. I did realise that I was now at a point where I was pushing too hard and anything I got rid of to achieve 100 I’d regret. Having shifted ~15 games in the past 2 months I’ve cleared the dead wood but some went in trades so numbers haven’t dropped all the way. However I’m ok with where my collection is currently. Space is fine and nothing is annoying in terms of feeling stuck with it so for now there’s a pause. This year I only bought 2 games and one was sold already, so I’m happy with that. If I can keep it at that for the year it’ll be a wild success, I don’t consider that likely but hopefully aiming that way helps.

Thinking about this can’t think of the word I think absolute counts are useful, even if you don’t achieve the goal.

I say I want 50 games in my collection but I’m above that. Do I mind, not really. Having the target made me question what I really wanted in collection. I have space to store all the games I have so I don’t have an issue with more than 50.

Bang on. It’s not strictly reducing down to X. You have 56 and happy with that? That’s success enough to me.