Since the weather has been horrible all week so far I’ve done nothing in the garden and have been thinking about gaming challenges. I think I’m going to try a 20 x 5 this year - seems a bit more achievable than a 10 x 10. This is my starting lineup: 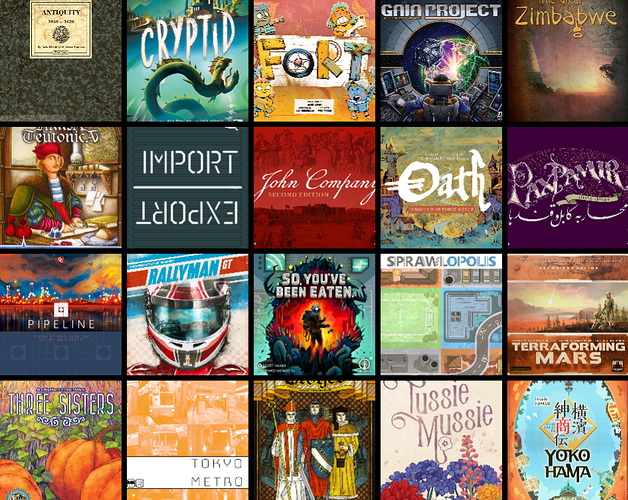 OK, I realise this will seem pretty pathetic to all of you but… At least once a MONTH manage to get the family together for a game. This is much more challenging that you think…

This is a great challenge! Are your family gamers already, or are you hoping to convert them?

That’s not pathetic at all.

I want to, but I don’t know what games to put on. I feel like my taste changed a lot over the last year. I also fear that anything not on BGA may be a struggle.

My other problem is logging plays. I know I’ll inevitably get BGStatd at some point which would make life easier. Once I miss a couple of games I find it hard to carry on.

Sounds like a job for the PubMeeple ranking engine!

I’m going to stick with trying a new 10x10. I really enjoy thinking about what ten genres of game I want to play, and then 2 or 3 games in those genres to try and get to the table. Even if/when I fail abysmally, it’s still a neat thought experiment and something to look forward to!

Plus this pandemic can’t last another full year, can it?

If you need any (probably async) help with the Splotters and Wehrles, let me know =)

I’ll join for the first time.

I’m not going to name my 10×10 in advance because I didn’t enjoy the feeling of having to play in December… but I’ll try for an “easy” 10×10 again, just seeing whether I make that during the year.

I’m going to give the BGG 52 game challenge another go. I’m not fond of all these “your favourite prompt from a previous year” entries but I’ve enjoyed this before.

That looks interesting, and quite difficult! I’m a bit confused by:

Do they mean (for example) a game that has a market of cards that slide to the cheaper slots when someone buys one?

I will be doing some kind of challenge. Haven‘t had the quiet time to think about it.

Additionally, I want to get my shelf of unplayed games played. It‘s been shrinking slowly especially with reduced „incoming“

I’ve been thinking about games for this. I’ve got a couple I know I want to play a lot to see if I love them. Also, need to check with my wife as she’ll be involved in most of it.

Do they mean (for example) a game that has a market of cards that slide to the cheaper slots when someone buys one?

I think so. The interpretations usually seem to be fairly liberal, and for some people coming up with a convoluted way in which a description can apply to a game is part of the fun.

Oh. they like games well enough - but getting them when they are all in the right mood at the right time is a significant challenge. I’m going to have to exclude the son going to UNI obviously…

Had a bit of time to think. I decided to do a challenge that includes games my partner agrees we might play:

And I am doing a solo challenge b/c I expect to be still playing solos but I have lost the habit to play big games in the evenings. So here‘s a list of solos, I intend to play:

I doubt I‘ll manage the first 5 of those 10 times each. But I am reasonably sure about the second half

Additionally, I‘ve created a challenge (in BGStats) to play 50 owned games that I haven‘t played yet. As I have incoming pre-orders and unplayed games that number 70+ games… getting 50 of those played at least once seems … possible?

I‘ll be mulling over my game choices for a bit.

Thought I’d see how I’d done with the 2021 52 games challenge (retrospectively) - surprisingly well, it turns out!

I will happily give you (or anyone) a game of Rallyman GT and/or Splendor on BGA at any time.

Definitely going to do some kind of challenge. Might be another “# x 5” mixed in with some “# x 1” plays to try to get unplayed or underplayed games to the table. Did that this year and actually managed a few.

Zero expectations that I will succeed but these are the ones I really want to play.