To maintain some continuity from SU&SD:

The basic idea is to pick ten games at the start of the year, and try to play each of them at least ten times. Last year I succeeded in this for the first time, by dint of picking soloable games.

I’m challenging myself a bit because I have a number of new games on here. I had AH on my list last year and managed 8 plays, so I think 10 is doable this year. I have all the big box expansions for IA now, and I really want to dive more into the game. Same with Ghost Stories and Isle of Skye, both of which I have played a number of times, but I’d like to get better at them.

Quacks is just fun and wanted to give myself one easy option.

This is where I am at the moment:

My gaming has really taken a hit recently - my husband and I don’t tend to play two-player, so I’m pretty much limited to what I can play online 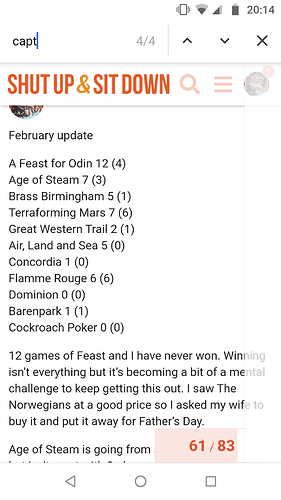 Not updated since March, but I’m copying over so I know where I was in March

Also this month has seen about 40 hands of The Crew, 7 or 8 games of Biblios, the same of Kingdomino and 4 games of The King’s Dilemma.

My gaming has really taken a hit recently - my husband and I don’t tend to play two-player, so I’m pretty much limited to what I can play online

I can relate. For a while there I was managing to hit most of my solo games a couple times a month. With the stay at home, my kids are going insane, which is making my wife and me nuts, too. By the time they are in bed and everything is prepped for the next day, I’m exhausted and don’t feel like playing something, especially knowing it will likely be around 2 hours of set up and play (Imperial Assault, Arkham Horror, Black Orchestra).

my kids are going insane, which is making my wife and me nuts, too

I can totally understand why you wouldn’t have the energy for gaming right now - it sounds really hard.

I’m so lucky with my kids being 12&11 for lockdown. We wake them up at 1030/11 (youngest was sleeping until 1 over Easter holidays - they’ve never slept this well before).

Mostly my wife and I play 2 player, but the boys are joining in occasionally.

Hmm, I usually edit my top post when I play a game in my challenge, and then just post monthly updates, but I can’t seem to edit right now.

My end of April stats are as follows:

Current progress for the year!

And a bonus 1x5 challenge! For the games that I want to get just one complete game of. Gonna be really tricky now haha

Almost no games for me in the month of April. I managed to get one game of Legion in, 2 games on Infinity (not on the list), and a couple games of Mice & Mystics (also not on the list). My board game groups have not handled the transition to online/TTS very well.

But that’s okay. It’s given me lots of time to focus on my writing. So that’s something, at least.

I’d not played this for a while, but I’ve just started with yucata.de and it seemed like a good game for learning the interface. Turns out it’s the sort of occasional thing I’m in the mood for, too.

So it’s May Day, is it? Time for the monthly 10x10 update, which is gonna be quite the challenge this year, what with all the multiplayer games on there. I’m limiting myself to one item change per month, phasing out any impossible games, just to provide the technical possibility that I could finish this thing.

I won’t, of course. But a long shot’s more fun than no shot at all. At least I can wrangle a bunch of these into 2-player fun once my wife’s semester from hell wraps up. Solo games, it turns out, are the hardest thing to manage with omnipresent little kids.

D&D is the new entry this month, and with weekly sessions I ought to hit 10 plays in no time. Fingers crossed it continues to go well and sap time I might use for other games, even –GASP– once I get to see other humans in person one day!

Thanks for getting us going again here @RogerBW

Challenge objectives (for continuity)
So many games, so little time, so I’ve bent the rules and split up the 100 plays a little differently for my list.

Have been quite enjoying KeyForge; it’s likely to get to 20 plays before Netrunner gets started at this rate. In general I prefer Netrunner, but am still learning the nuances, which makes KeyForge an easier option at this stage.

The play count continues to tick over, but not in the right areas to achieve objectives! This won’t be helped by picking up 20+ tempting decks from someone selling their whole KeyForge collection.

Was nice to play Burgundy for a second time; it’s been over a year since the first. Hopefully next time it won’t be quite as great a gap between plays.

Oh dear. At the end of May, no significant change from April in spite of the huge amount of on-line boardgaming I’ve been doing:

Rallyman will happen automatically by the end of the year thanks to ISGOYTRA. But I really should take a look at some of the others. When some of the existing PBFs finish I’ll probably do some more PBF V-Commandos here.

End of May update:

Not as much change as I had hoped for, but I have been playing other games not on my list. I am pleased, though, that I have now played every game on my list at least once.

The official Wingspan DLC on TTS is quite nice, and my friend had already bought it, so I didn’t need to

I played Tzolk’in on boiteajeux.net. I’ve played a few asynchronous games with internet randoms, but I’m only counting plays where there is some kind of interaction with other players!

In a shocking turn of events, I have played nothing this month.

My friends who we have played a few games over TTS have kinda gotten tired of it (which I respect, since it doesn’t really “feel” like playing a board game so much as it is a sorta awkward video game using board game rules). That’s okay. I have done a bunch of painting for when we do get to play again we’ll be good to go.

A side note: we managed to get about 4 or 5 missions into Mice & Mystics before they decided they weren’t having fun… this will be the fourth time my partner and I have tried to get through the campaign with people that just weren’t into it. Previously I assumed the couples we played with just weren’t gamers, but this time I know Jen and Chris are gamers (they played through LOTR Journeys in Middle-Earth, Gloomhaven, and Gen7 with us)… maybe it’s just too old? Either way, I may have to give up on playing the campaign and just read it through and then move it on to somebody else to get some joy out of it. It is a fiddly game, and it’s certainly not for kids (despite the extremely childish story), but I like it… oh well.

Oh, May. I’ve checked off some of the easy two-player games, managed a whole mess o’ D&D, and the rest of the list… well. Let’s not pretend it’s going anywhere anytime soon. Maybe I ought to write up about my D&D campaign here, as I’m ever so delighted with my PCs. (Too bad the kid gloves come off this Friday.) But that’s for another thread.

A decent month of gaming. Just One was back in action and the first play of Treasure Island was a hit.

Observations at the half way point: