Wot are you playing (video games)

I played a bit of Skyrim after seeing something about the anniversary edition add-ons. I loaded the Special edition but it bugged out during the intro (the dragon flew in circles forever instead of landing on the tower) so I loaded the original again instead. It’s still great.

Awesome! I’ll get back into it.

My partner watched the video from one of the big German gaming magazines (Gamestar) about the new mobile Diablo. They tested the game in one particular aspect: how much money can you spend? (Note: The game is not allowed in Belgium and the Netherlands because lootboxes are prohibited there).

They played and clicked on every micro transaction offered and managed to spend 500€ in 2 hours.

They also calculated how much it was cost to pay your way to max out everything: 100.000€ vs about 40 years to do the same without paying money.

I do not know how accurate this is but I can probably look up the video of them playing if anyone is interested—it‘ll be in German though. I for one will not even try this even though I loved the previous Diablo games.

If this is really the way it is, it is irresponsible. Our friends had something happen like this with their son spending about 1000€ through a variety of micro payments on a game when he was too young to understand. They came to an „understanding“ with their internet provider (through whom the money was billed) but in truth they ended up paying the money.

Edit: Of course one doesn‘t have to pay any money, but other articles I‘ve just checked all suggest that the free-to-play experience will be frustrating without spending any money and from personal experience I know how hard it is to put limits on money spending in such a game.

Presumably that’s the point of the exercise: to get you thinking “this is annoying, but if I just bought that thing it would be better”. Repeatedly, until you have no money left.

I know. But this one seems to be excessive? The game itself is apparently fun to play if a bit „shallow“ and because it is a big name I think a lot of kids will want to try it out and they have very little experience on how to resist this kind of stuff.

We had a bit of a shock when our boy bought 3 expensive videos on Amazon Prime on a new tablet. Now all our devices are locked down - no purchases without pins. It does suck that such mistakes can be charged at all, with no recourse for refund, but it’s also not hard to make sure it doesn’t happen.

Our kid has purchased stuff on his Amazon tablet before too, but a call to customer service allowed us to get it refunded. And yep, full lockdown is now in effect on the kids tablets. Can’t even download free apps without parental permission.

I’ve been playing Death’s Door. I’ve always found Zelda games too simple, but this game really does the ‘Zelda with higher difficulty’ thing super well. The whole thing is a joy!

In your case, had they already watched half an hour or so of each film? Because that was the sticking point for us.

Sorry, got stuck in a loop there.

That sounds terrible and predatory.

I read that typically, such games aim to do two things: be good enough to play without spending a penny, in order to secure a large player base and maintain visibility, and allow for insane spending when a “whale” goes all in, as this provides nearly all the profit. So it sounds entirely normal, it’s just that the normal model is horrible.

I just played through Citizen Sleeper. It’s half-RPG, half interactive novel, all beautifully evocative cyberpunk narrative with an interesting story, multiple endings, and plenty of heart. I liked it very much. Its about 6 hours to play and included with Gamepass. Recommended.

Shredder’s Revenge has released, which is a Ninja Turtles game developed by one of my favourite indie studios (tribute), and an homage to the original coin-ops. I am a very happy dude.

Oh man, I could actually see picking that up myself.

I’ve only played through the first few stages but it’s been really fun. Very simple controls that mimic the original games, but with the inclusion of a dodge roll button to take the quarter-muncher feel out of it a little. I always feel like these games are a tough value proposition for most folks though (at full price). I have no idea what kind of things they’ve included beyond fun and score chasing for longevity.

[EDIT] I guess 6P online play counts for a lot!

[EDIT] Beaten! Can confirm Casey Jones is an unlockable character! Some fun soundtrack surprises, too.

The PC Steam version of Talisman, which I always thought was quite a good implementation, is on Humble Bundle for £8.83 for ALL of it.

The reason I didn’t play more is the DLC is a ridiculous rip-off (something like £90 for all of it?) but if the price is nearer £9, it’s worth checking out: 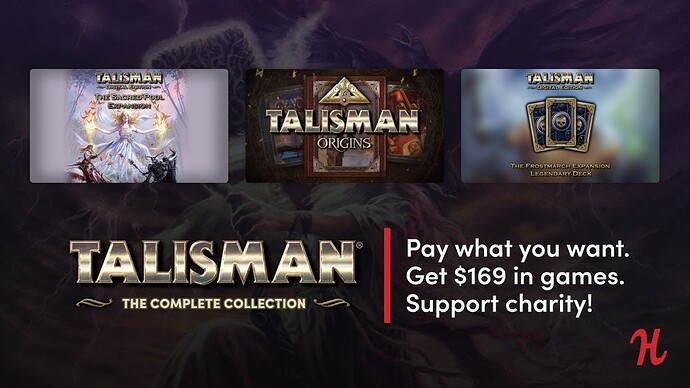 We’ve teamed up with Nomad Games for our newest bundle. Get games like Talisman Digital Edition and tons of DLC. Plus, pay what you want & support charity!

I considered that, realized I have a lot of the DLC already, and then thought about whether I really needed more Talisman in my life at all and…not really. I have such nostalgia for that game but because it was an adventure game with asymmetric characters and intense game-to-game variety in an era where there was very little of that. Now you can hardly open BGG without tripping over one and one that’s not a competitive roll-and-move with almost no meaningful decision-making, at that.