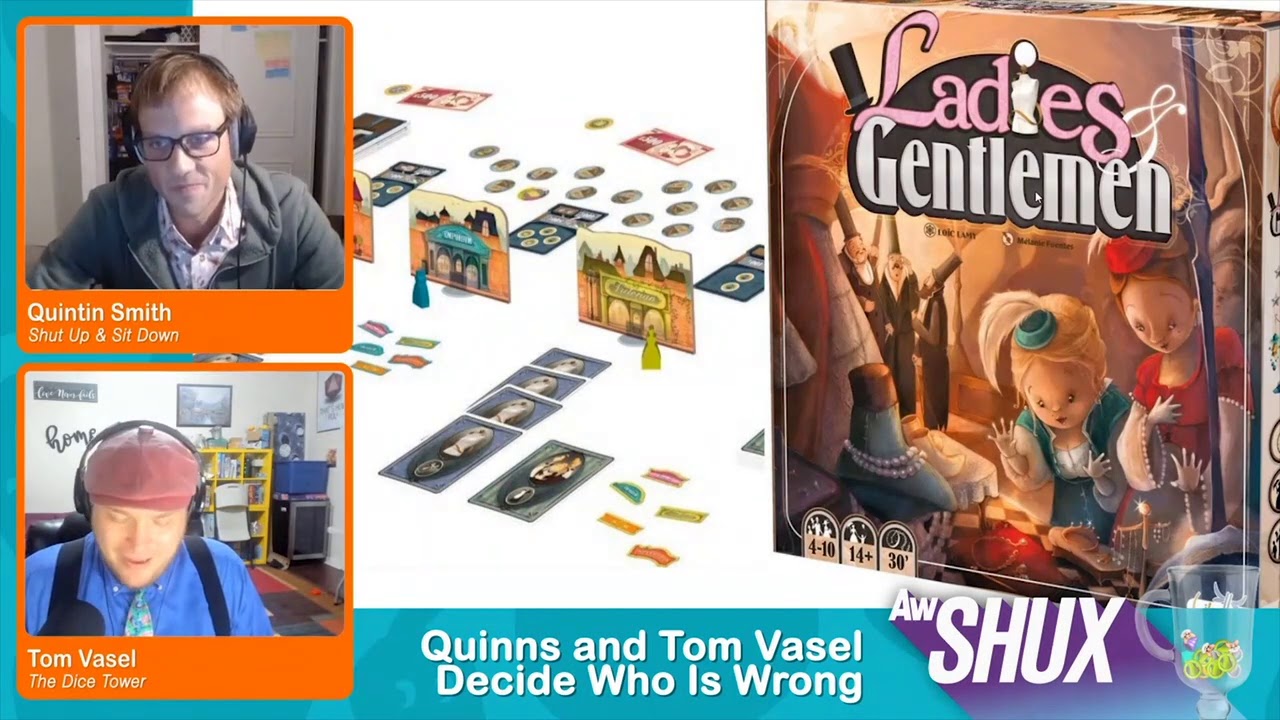 I didn’t watch the stream live but I watched the video later and I must say these kinds of conversations fascinate me much more than most reviews. I so rarely get to see revised opinions on games years later (maybe I should listen to the podcasts more often) and I watched a lot of old reviews last year when I first discovered video reviews.

So what games were you wrong about? And why did your opinion change for the better or worse?

I am so surprised that Le Havre was Tom’s fave game right now.

“Unfortunately, we are more alike than I would prefer” OH LMAO!

So what games were you wrong about? And why did your opinion change for the better or worse?

Hmmm… I certainly dont think I was “wrong” on most games that I changed my mind on, since my taste have changed radically for the last 3 years. I would never give Tigers and Pots a 10/10 3 years ago.

But there are some that I felt wrong about as my thoughts changed quickly within a short timeframe. I was wrong about the two Brass. I thought the wider map of Birmingham was better, and the wider set of choices of industry was great. But I soon changed my mind to Lancashire. Lancashire is a cleaner, more cutthroat, and more interesting game.

Railways of the World - I thought this is boring snowballing train game with lame player interaction. It has nothing of the dynamism of Cube Rails and I still agree with this. But now, I like the strategic decisions in this game. Still not as good as Age of Steam though

Just the top of my head

Changed my opinion? Never. My opinions were right the first time around.

Joking aside, the big ones were probably Twilight Imperium 3rd Edition the moment 4th Edition hit: it went from my favourite game of all time to a game I have fond memories of but would 100% never play again.

There are lots of games I slowly arced away from… Catan, Carcassonne, Thurn and Taxis… games that I played dozens of dozens of times and then just kind of… finished. No need to continue.

I’m still really undecided on Heroes of Air, Land, and Sea and Empires of the Void. I’ve played them each 3-4 times, and each time I walk away thinking, “Huh, that was definitely a game. I think I had fun? But I’m not sure? Maybe I didn’t? Maybe I shouldn’t play it again… or should I?”

I was wrong about Twilight Struggle.

I thought the dice rolls were too swingy, the board was overwhelming, the cards you have to remember too numerous, and the perspective too American.

Now, I was right about all those things, but I was wrong to think that any of them made the game bad.

I was also wrong about Splotter games in general.

I used to believe a simple maxim that some kind of random or hidden element is necessary to create interesting games (I wasn’t a fan of chess, and much as I appreciate Go, Shogi, Xiang Qi and the like, they all provide a totally different experience to modern hobby games). I also thought Splotter titles were ugly.

Turns out that a bit of random setup is sufficient to make every game feel different and exciting, and functional clarity can have its own appeal, and a kind of beauty.

For me, some games have fallen out of favor due to being played too much. Mostly that would be Catan.

Then there is a certain style of game, we used to play, games like Talisman and Arkham Horror that told stories on a board with the help of dice. I used to enjoy the open boards and number of stories that were in the game. But my tastes have changed and I need more game (stronger mechanics) in a game now and less random.

And then there’s one I am up and down on: The big one is probably 504. I saw it at the fair and I was excited to get kind of a meta-game. But I was unable to play it because 2F games always has such a small booth with barely 2 tables. A few years later, I bought it and it was pure chaos of the components and hard to play any of the games. So I gave it away. These days I might keep it on the shelf, build an insert for it and try to grok game design in an abstract way. So yes lots of ups and downs on that one. I still don’t think it’s a good “game” but it’s a concept work, an abstraction and as that it has worth.

I have rarely had the case of a game improving its rating on me. Except one. I preordered Codenames when it came out. And enjoyed it. Mostly. But it wasn’t a game I would pull out at every occasion. At times I was a little “really, Codenames?” Except now with the online version I’ve come to appreciate it and the replayability and accessibility…

One last. To my eternal shame, I used to really like Cards against Humanity. At first we played it in small groups with close friends and it was good fun. I started hating it when we were on a vacation and played with a bigger group and alcohol as involved and people started to “game the humor” and then it went off the rails. I don’t think we played it for the crassness as much. But I learned that the humor left quickly when someone figures out what would trigger the current player’s laughter. (The same goes for all these kinds of games). I still have it. I wish when someone borrowed it I had not asked them to return it. I am sure they would have kept it.

But I learned that the humor left quickly when someone figures out what would trigger the current player’s laughter. (The same goes for all these kinds of games).

Yeah. I played Red Flags a few years ago at a game convention, and quickly realised that the way to win was to work out what the judge for that round would find most unappealing. (I dare say you’re not really supposed to play to win, but…)

(I dare say you’re not really supposed to play to win, but…)

I have a lot of games I’d rather play for playing than to win (Concept, Perfect Match, Dixit you name it, even Codenames is just has hilarious when you lose). But among my friends there are a few highly competitive people–a fact we weren’t quite as aware of back then–and they just have to play for winning.

I admit that that competitiveness was done in an attempt to get some pleasure from the game, which I otherwise found rather unpleasant. But I don’t think I spoiled anyone else’s fun, so I think that’s fair.

I found Red Flags at least enabled some creativity in allowing you to discuss some match ups, rather than just throwing some cards together. Billionaire Banshee does it a lot better though.

On this video, I’m really not sure how much Tom Vasel is enjoying it.

I think Cards Against Humanity is brilliant the first time you play it, ok for a second play and then really not good after that. More annoyingly it has spawned a huge number of what I call ‘Stag Do Games’ where the idea is to get people to say abhorrent things.

As for games I’ve changed my opinion on, we were big fans of Machi Koro (which is basically Catan with cards) and played it loads, but it becomes very samey. On a more positive note, I’d never been a big fan of Carcassone until we played it about a month ago over Zoom and I thought it was fantastic.

We’ve been playing Machi Koro Legacy which is very gentle fun. It’s maybe the least balanced game I’ve ever played, in that some cards just wipe the floor with others, meaning there’s no reason to ever pick up certain cards. The novelty of the legacy aspect has kept us coming back and after 9 plays I’m ready to finish it off with the last one.
I don’t think I’ll ever open it up after we’ve finished the campaign but the new features means it has avoided going stale. If it weren’t for the campaign structure I would probably get 3-4 plays out of it before deciding it wasn’t for me but I’d actually recommend it overall despite its flaws. Not sure if you’ll get as much out of it having played the original first though.