What are you brewing? 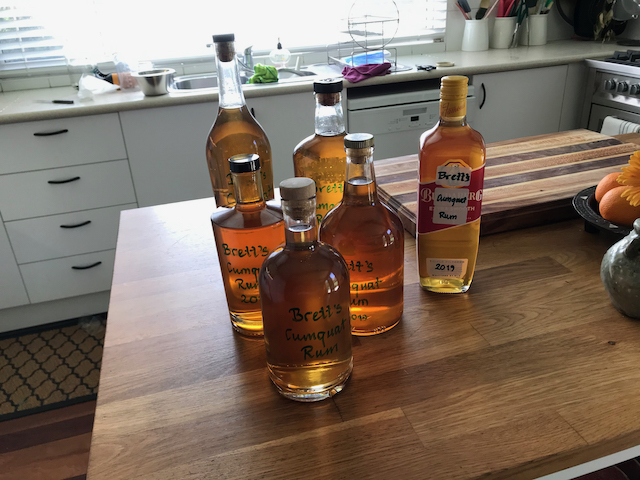 And laid down a few litres for next year. 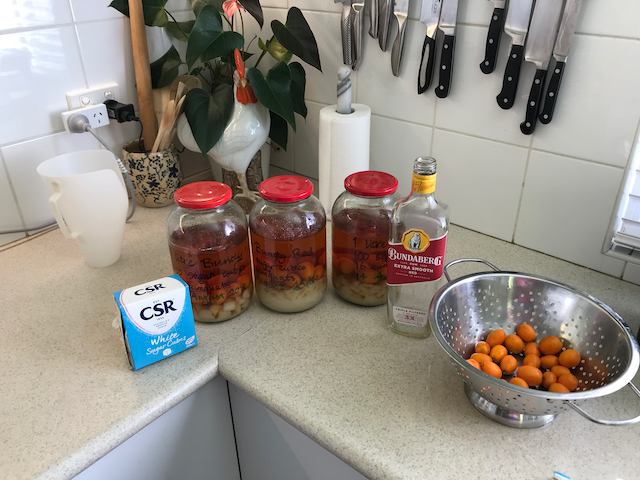 The recipe is that you put 100 sugar cubes (450g of loaf sugar) in a pickle jar with 1 litre of sippable rum and 16 nice ripe cumquats with completely intact skins (including the little green thing where you cut the stem with scissors) having no holes or defects in them. Screw the lids on tightly and put them in a dark place with a steady temperature (ideally not above 25C). And then leave them alone for a year. Do not shake, do not stir; leave the layers undisturbed for a year.

At first the fruit will sink in the liquor. Spirit will diffuse in through the intact skins by osmosis. Then the sugar will gradually dissolve, producing a dense syrup. The fruit will float at the interface between the spirit and the syrup, rising gradually to the surface of the liquid. Then they will be forced into the syrup, where osmosis will draw the spirit back out of the fruit, extracting flavour from the zest. The fruit will shrivel like raisins and sink to the bottom of the jar. When they return to the bottom the liqueur is done. 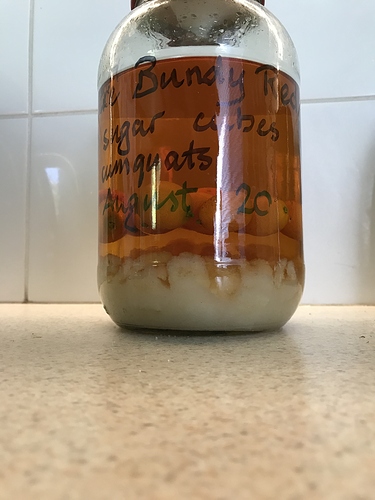 Note the layer of syrup that the fruit are floating on top of. You do not want the fruit immersed in syrup at this stage — not until the spirit has suffused them by osmosis through the skin. So do not shake or stir the reactor!

Does anyone have a good brewing recipe involving blackberries?

Brewing, no, but my wife has made blackberry vodka – if that would help I’ll ask her.

I make a Blackberry whisky? Its an infusion rather than brewing tho.

My inlaws have bought a house with 3 apple trees, one cooking and two eaters. We’re experimenting with making cider!

I have a sadly unused demijon and associated gubbins, so I was thinking of wine. However, blackberry-infused spirits could make good Christmas presents…

Only for next year… You really need to lay them down for a year to get the best from them, although they can be ready in a 3 months.

This is the recipe I use if you’re interested: https://www.rivercottage.net/recipes/blackberry-whisky

Here’s a recipe for wine if you’re so inclined. https://dorsethomebrew.co.uk/the-ultimate-blackberry-wine-recipe/

Thanks! Presents for next year are equally acceptable:)

It really is delicious. Like a very fruity port. Nice over ice too.

And you can use the cheapest, harshest whisky you can find!

Nothing more exotic brewing here than a cuppa. 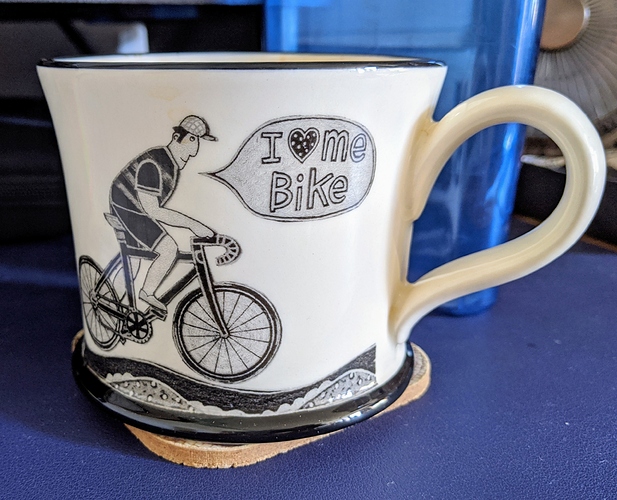 If by brewing you also mean fermenting you could try lacto fermenting a few berries. All you need is berries, salt and a way to keep air from the bacteria doing the fermenting. For blue berries the ratio is 20g of salt on 1 kg of berries. I used just a quarter the amount of each for my experiment.

The result is a salty sweet puree you can use to flavor other dishes.

Ps depending on temperature the duration for the fermentation is between 4 to 6 days and don’t wash the berries too much you need the bacteria on their skin.

My wife (who has no interest in boardgames) writes:

This would probably work for gin as well, if you like juniper which I don’t.

First, and important: do not make this using a narrow-necked bottle. Getting the blackberries out again without making an astounding amount of mess is not possible. Find a wide-necked jar that is large enough to hold the amount of vodka you want, plus half as much again for the blackberries and sugar. I use large old pickled onion jars from a pub, which were free. Kilner jars would do.

Second, do not use good vodka. It doesn’t make the end result taste better. Because the nearest shop here is Tesco, I use their cheap own-brand “grain vodka”, and I buy one-and-a-half-litre bottles because that is cheaper per volume than one-litre bottles are. It keeps. It keeps best at the back of a kitchen cupboard where nobody notices it. I expect other supermarkets sell the same stuff with different own-brand labels. I am told the very cheapest gin makes nasty fruit gins, so one step up from the very cheapest is advised for gin.

Keep the original bottle! You will be using it, re-labelled, to put the blackberry vodka into in a few months’ time. (Small bottles are also fine. Glass bottled-water ones from the pub are free.)

Pick blackberries. Pick lots, because they freeze well and you could do it again in February if you have frozen blackberries available. I do raspberry using 500g frozen raspberries to 1.5 litres vodka, because it’s way cheaper than using fresh ones and you can make it out of season.

Put the vodka into the jar and add blackberries until the jar is nearly full – call it 500-800g, or just drop them in until you have enough. Add three dessert spoonfuls granulated white sugar. Remember you can always add more later, but you can’t add less. All the recipes on the internet have too much sugar for my taste, so you end up with a syrop.

Label it with the date and leave it in the way somewhere. For the first couple of days swirl it around when you happen to remember, to dissolve the sugar. Once the sugar is dissolved, put the jar out of the way and forget it for a couple of months or so. (Traditionally the autumn’s blackberries make the Christmas blackberry vodka, which gives a rough time of between two and four months; twelve weeks is generally recommended.)

When ten weeks or so have gone by and you happen to remember it, have it out and taste using a teaspoon. At this point if it tastes as you like, bravo: you have made blackberry vodka. If you want more sweetness add sugar. if you want more blackberry, leave it for a bit longer. To the best of my knowledge, another month of steeping because I forgot about it has never done any harm to any blackberry, raspberry, pear, plum, damson, sloe or dried fig vodka I have made.

When you reckon it’s as ready as you are prepared to wait for, and it is a nice deep colour whereas the blackberries have gone almost white, first use a sieve to get the blackberries out of it: put the sieve over a bowl or saucepan large enough to take the vodka and have some freeboard for dripping, and leave it to drain the blackberries. (I am told you can eat these or make a boozy crumble with them, but I never seem to do it: the anaemic colour puts me off.) When they are drained, put a funnel in the top of the jar it all came out of, fold a piece of kitchen roll into quarters, and fit the kitchen roll as a filter into the funnel. Gradually strain the vodka+blackberry into the jar. Then repeat the process from the jar into a bottle. You did keep the original bottle, didn’t you? If you want to give some away, you can decant it further and make fancy labels for smaller bottles.

That is It. Really simple, lots of mystique around it. Everyone has their own way of doing it, and exact quantities and timings, but this way seems to produce vodkas that make people happy.

(I am told you can eat these or make a boozy crumble with them, but I never seem to do it: the anaemic colour puts me off.)

I have with the ones from Bklackbery Whisky and it makes an awesome blackberry and apple crumble!

Finally decanted the slow gin i made earlier this year from sloes in the freezer. Probably going to leave this in the bottle until NEXT autumn. 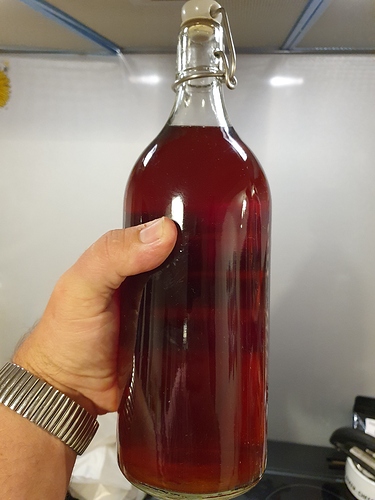 Aaaaand another two batches to go (about 4 70cl bottles worth) - these will again be ready to drink probably next Christmas. 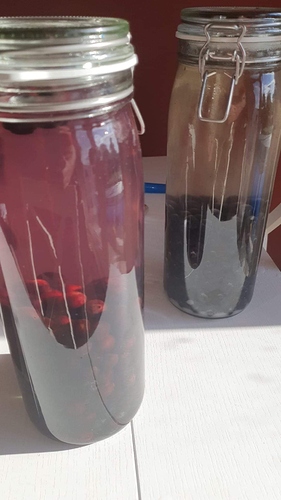 I’ve also got 2 X 1 gallon demijons of cider on the go. Need to decant and bottle.

I’ll also be making a demijon of Elderberry wine this evening.

Im also going to try some other ‘country’ wines. Carrot wine, anyone?

Fruit rising on a layer of syrup as the sugar cubes dissolve: 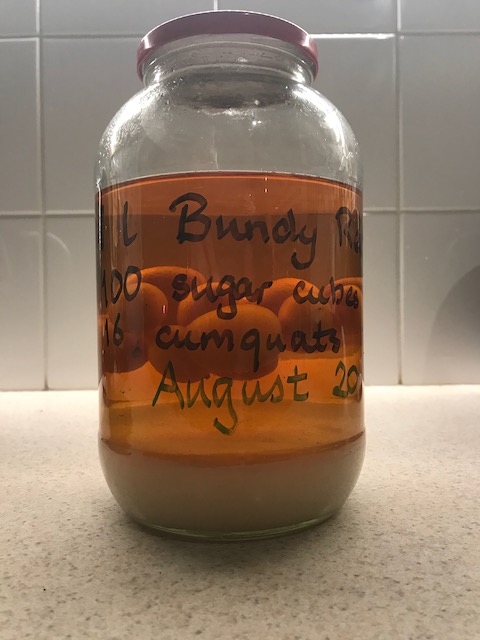