I would like to use my Scuttle action card. Destroy 1 dreadnaught and the destroyer in the asteroid field. This will gain me 5 trade goods. Then I will pass. 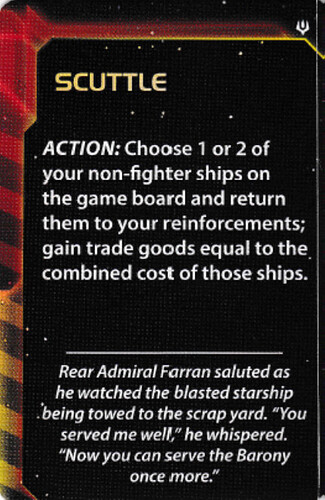 Honestly, I have no preference. If the game ends at this point it was a hard fought victory for the Yssaril.

If it doesn’t end at this point I will continue to pressure them to earn that win, but I have no illusions of victory at this point. Not that I’m doing badly, but I don’t think I can score points fast enough to pull it off.

But again, I am happy with either.

I think we should hear from all players before continuing as to what we play to. I am happy to continue playing if we want to go to 14. If we play to 10, fair warning, the game is going to end now.

I’m happy enough if it ends. But I’m not in contention for the win.

Also I think the captain gets my shard of the throne and we swap the victory point that goes with it.

I’m enjoying this, and would like to play in person because I think I’m still missing loads of what’s going on.

Yeah I have similar feels.

Since this was an introductory game, perhaps we should end at 10vp?

Im ok with ending at 10. This was a great first game to finally finish.

Okay, then if ending at 10, I will use my newly gained TG’s to accomplish the Negotiate Trade Routes public objective. I will then also discard 5 of my remaining action cards to accomplish my Form a Spy Network secret objective, which should put me to 10.

Though seriously guys? I was aching to get a fleet of 5 destroyers into combat and then play 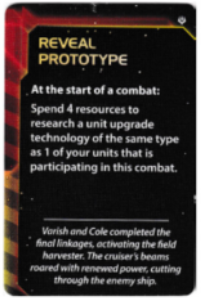 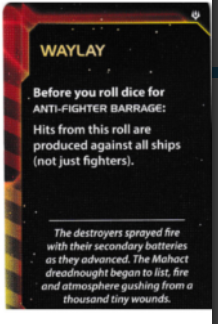 The awesomeness of going from 5 dice that can only hit other non-fighter ships on a 9 or better to suddenly having 15 dice that can hit everything on a 6 or better and allowing no counterattack, plus then having the usual 5 dice that hit on 8 or better was practically giving me goosebumps!

Well played @COMaestro. 6 months. Phew! I thought oath was long. Thanks for organising, co-ordinating delwayne and thanks for the patience and guidance everyone else.

First time playing and I feel like I’m just starting to grok it now. The hardest part was trying to keep some semblance of the cards available, In play and the world state. I really struggled, and know I made some sub-optimal moves. That being said I had a blast and can see the attraction of playing this irl.

Thanks everyone, well @COMaestro , although I’m not convinced @GabrielH doesn’t have something to come.

There are so many moving parts in this game that I couldn’t get my head round it properly, and that would have been much easier irl, but I’m really glad to say I’ve played TI4.

Thanks @Delwayne for organising, thanks to everyone for the help, especially @Marx you’ve been a godsend.

It’s true, if @GabrielH has a way to get two points, he’ll win, as he is closer to the Speaker in turn order. I’m just not seeing a way for him to do that.

As far as the game, it’s definitely easier to grasp IRL, and easier to explain when questions come up. Though the plotting might be a bit easier in PbF as you have all the time you want and can get a close look at the map and everyone’s boards/cards without them seeing it. Admittedly, it was difficult having to scroll back to find the most current photo of people’s boards, or the map, or the score tracker and objectives with the dozens of posts in between.

Good game everybody, and huge thanks to @Delwayne for running it!

I know when I’ve been running ST:A I’ve been reluctant to do a new map-dump post in mid turn. I wonder whether it might might sense to have a URL for images of the current game state, which gets updated whenever, as well as the periodic posts? I’ll try it next ST:A.

My deepest congratulations to the noble Yssaril Tribes and their honourable(ish) leader, @COMaestro! Long may you reign!

A huge thank you to @Delwayne for running this monstrosity of a game, and to the glorious competitors, @MIGHTYSploosh, @Captbnut, @GabrielH, and @GeeBizzle for the fantastic time. I apologize for all the nudges, pokes, prods, and moving-things-along I injected over the last 6 months, but I hope everyone had a good time.

As for the Titans… we are a long lived species, and have slept for hundreds of years to wait for the last empire to fall… we are patient.

Thanks for the game, everyone.

Thank you everyone for playing. I do hope some of you get to experience a live in-person game!

Well, I got clobbered well enough that I can’t make any final comeback. Still, it’s been a ride; thanks to y’all for playing, and especially @Delwayne for running - this is a game I would almost certainly never get to play in meatspace.

If anyone else is interested… take a look at

Any fans of the boardgame out there? Do you think it would be a cool game to implement here? Would there be perhaps 4 dedicated players here for it?

Nope, but in spirit I am going to play as the Octopus/Kraken in the middle of the board!