The Word for World is Homework

What do you do when you’re starting a new campaign, or have created a new game and have to fill in the potential players? You have to excite them and make sure that you are on the same page (or maybe it’s just fun to have Conan in Narnia). At some point you may have to communicate stuff that the player characters would just know as Time Lords/MI6 operatives/space lane scum.

I have ‘solved’ the problem by running short games (1-3 sessions), and sometimes by running games with a shared baseline (like Call of Cthulhu), but I still wish that I were better at doing the other thing.

Well, sometimes I contrive a portal, so that characters from another place who are no more familiar with the land of adventure than the players are can go there. That’s pretty obvious in, for instance, a campaign for WWI Australian infantrymen mysteriously transported from the Somme to I-can’t-believe-its-not-Barsoom. Rather less obviously you can do it in a Traveller-like SF setting if PCs from some vaguely specified cosmopolitan place go to a [series of] planet[s] of hats. Provided that you are careful to stick to planetary romance rather than space opera you can contrive that the adventures are about the properties of the strange parochial societies and not about the features of the cosmopolitan matrix. Then the players’ unfamiliarity with the foreground matches their characters’, and you get to sketch in the background gradually. Or conversely you can bring PCs from an obscure backwater into the wider setting, on the occasions when all your players feel like playing naifs and ingenues.

It’s a familiar issue to anyone who has tried to run a game of Empire of the Petal Throne or similar. After trying a few approaches with varying degrees of success I found that, in that setting at least, it helps to have the PCs encounter foreign types who do things differently. For example, “Your host serves you with room-temperature cups of a milky drink, sour and slightly sweet. It’s quite different and inferior to the cool, spicy chumétl that you are used to as civilised Tsolyáni.”

Yeah, Tekumel must be daunting! I have never dared it, but I’d like being a player. The TekuMaster would have be patient though.

Well, the classic way is the way RQ3 did it. You give a player a two page summary about their cultural background: enough to get them started but not enough to blow their minds. The RQ guides were called ‘What My Father (Shaman/Sorcerer) Told Me’.

And you keep a close eye on your players and are not afraid to say to them: “As you already know…”

One big infodump before sitting them down and extra info as they go.

I’m contemplating the Tekumel problem at the moment: I’m trying to come up with a good, flavoursome and not too complex scenario to try out my HEROQUEST adaptation. One page of A4 about their social status, favoured god and profession and maybe a page more for the sorcerers.

I am damn certain My Tekumel Will Vary. I don’t even pronounce some of the names of things the right way.

I don’t even pronounce some of the names of things the right way.

Your impaling stake will be ready shortly

I tell them I’m using the northern Tsolyani pronunciation.

What do you do when you’re starting a new campaign, or have created a new game and have to fill in the potential players? You have to excite them and make sure that you are on the same page

I don’t start new campaigns very often. When I do, I try to have an easily understood basic concept. If the campaign is one that I’ve thought about a lot, I naturally generate a document with my ideas, so I make that a bit more coherent and give it to the players. I don’t tend to run things with One Important Mystery, so this doesn’t give things away.

I do like starting new campaigns. I probably like starting them more than I like running them, in fact. (Unfortunately, my system of choice being GURPS, generating lots of new characters is more work than many players want to do.)

The Thing I Always Say is that most players won’t read more than one page of briefing materials. Some players are exceptions. If the background is particularly complex, my experience is that @JGD will get heavily involved and ask Awkward Questions, which is exactly what I want.

I think one answer may be to have a one-page general briefing, and then specific information dumps for specific things (you’re playing a sorcerer, here’s the truth about what those ignorant peasants call “demons”). But when those start to link together, you end up with a mega-briefing, which I know @Agemegos has found tricky to get players to engage with at all.

I reckon that in theory you can make character generation into a process for conveying information about the setting. For example, suppose that you carefully designed a life-path character generation systems like that in classic Traveller. The player makes a series of choices from lists or rolls on tables, each of which determines something about their character’s nature or history. In doing so that are guided to read a small selection of lists of features that are in the setting and one-paragraph descriptions. As a result, the player learns just enough about the setting and features it has to get started with playing that particular character.

I’ve always been daunted by the amount of work that would be involved in designing such a life-path system.

I think one answer may be to have a one-page general briefing, and then specific information dumps for specific things (you’re playing a sorcerer, here’s the truth about what those ignorant peasants call “demons”). But when those start to link together, you end up with a mega-briefing, which I know @Agemegos has found tricky to get players to engage with at all.

Just so. I have two colossal settings that started out* consisting of about 8,000–9,000 words each and have since accumulated large amounts of detail and lore. The fantasy setting has a 75,000-word cross-referenced alphabetical encyclopaedia. But those settings have always run best with the clot of players who were playing while they were being built and a very small collection of later enthusiasts. I’m afraid that they have both become inaccessibly vast and intricate. I’m still trying to save one of them, and I think the correct approach is to abandon 90% of the detail.

* In 1987 and 1988. We were all students back then, so we had lots of time on our hands and thought nothing of reading hundreds of pages per week and grinding out thousands of words in an evening (or even a three-hour exam). I wish I could still churn out informative prose with the facility I had as a student. Writing research results to get past peer review cripples a writer for life.

The Heroquest “Sartar Kingdom of Heroes” sourcebook includes a “clan questionnaire” - a series of multi choice questions about what your ancestors did since the God-time up to very recently - the answers help to define exactly who your allies and enemies are likely to be and what your clan’s strengths and weaknesses are. You work through it as a group as part of (prior to) character generation, so that everyone gets a basic primer on the setting. ( It may also be available as a free download from Glorantha.com). My players found it quite helpful as they were all new to Glorantha, and it helped them to get the general feel

Another “solution” that won’t work in every case is to let the players tell you what they know when it becomes important - if you can give a broad concept so they can create characters, you can leave worrying about the details until they come up…

Mongoose Traveller extends the lifepath elements of the character generation system quite a bit, and I’ve been tempted to play with it.

There’s also the Heroes series (by Paul Jaquays back in the day), but they’re the exact opposite - generic lifepaths that need a lot of work to bash into shape for specific settings. (Even more if you have any idea of who the character is supposed to be beforehand.)

A thing I’m working on is a future setting about poor people in a world where work is a thing of the past, but vestigial capitalist imperatives remain. People trying to make rent and get revenge.

I’m using Chris McDowall’s Into the Odd/Electric Bastionland rules, which have an interesting way of imparting colorful and pointed setting info. You roll your stats, hit points and starting money, and then you roll a (failed!) career. This gives you some expertise, sample names, gear, and a precarious place in the world. Your hit points and starting money determine some of your gear and abilities, while asking and partly answering a question about your character. It also provides a bit of info about the world.

Here is an example career from my game. 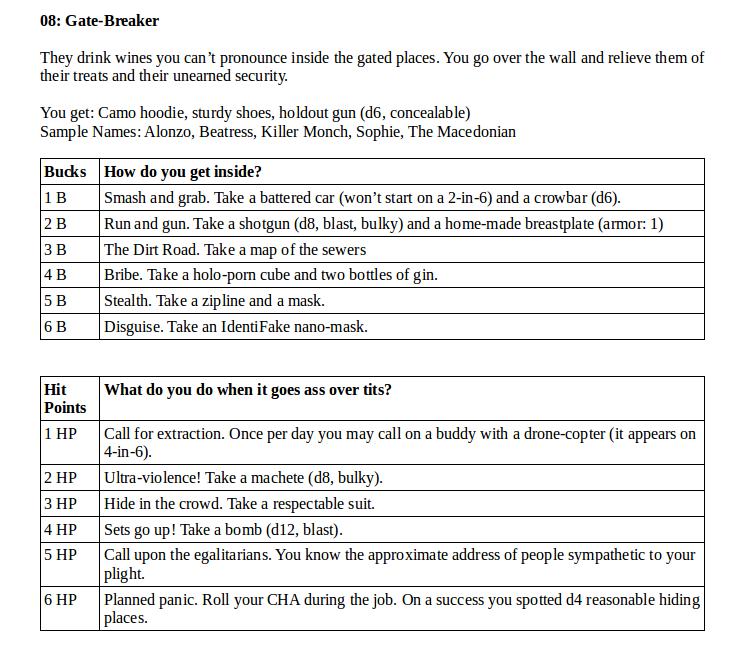 If it is a commercial game rather than a home-brew setting, I point them at the “our setting is cool” webpage for the RPG in question. If that hasn’t distilled the salient points down, then they probably won’t have managed to sell it to me in the first place!

For char gen and the first session I have become a fan of bullet pointed lists, rather than dense text. And maps. You can sneak quite a lot of info onto a map, and colour code it to boot!

“…and there were some weird curved blades left at the scene of the crime.”

My New Favourite Player: “Hey, are those underground fighting horseshoes?”