The games we judged by their covers

In their episode about the James Bond 007 RPG the presenters of the Grognard Files podcast lamented that in their mis-spent youth they gave James Bond 007 a miss, where they now see that it is a brilliant game design and would have ideally suited their gaming needs that the time. The reason for that mistake was that they supposed, judging it by its cover, that it was another in the rash of games then current that were designed for the players to play a particular character established in other media (Indiana Jones RPG, Doctor Who RPG…). That mode, they correctly assessed, was rubbish. But actually, James Bond 007 turns out to be not like that.

The game that I similarly misjudged by its cover, back in the day, was DragonQuest. My brief fling with dungeoncrawling was over. I was avid for an RPG that would support adventures rather than combat. I saw this: 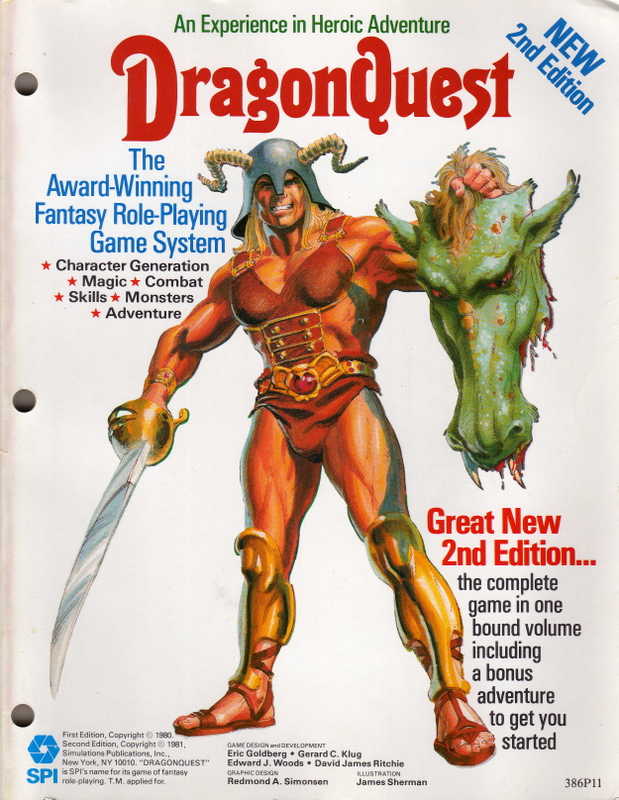 And I decided that I was not in the target audience for a game that marketed itself with blatant wish-fulfilment fantasy and a vision of “heroic adventure” in which meaty nudists with vapid grins kill dragons in hand-to-hand combat.

And that was a great shame, because I missed out on an excellent game.

What games did you judge by their covers, if any?

A game that you bought because you liked the cover would also be on topic.

You might even mention the cut-outs in the front cover of first version hardback Werewolf: the Apocalypse, which tore up whatever you shelved it beside.

I know someone who had that Werewolf edition. He doesn’t any more.

Tales from the Floating Vagabond. Bought at a Gen Con on the basis of the Jim Holloway cover and a quick glance through it which made it look like fun… but it isn’t.

I turned down Amazing Engine… in retrospect, I think, because it was from TSR. The settings looked uninspiring, but it did actually have some good ideas (Bughunters in particular did a good job of a hard genre, and the overall system took an approach to cross-universe gaming and multiple short-term campaigns that I’ve never seen before or since).

I’ve certainly pushed away with a 10 foot pole many games or splatbooks which have a lingerie ninja or boobtastic bimbo on the cover. The only one i can recall the title of is a wargame rather than RPG: I bought the US edition of Chain Reaction because the cover was a target with bullet holes, whereas the UK version was a woman in a bikini with a submachine gun. Sorry can’t find links to either of those editions of Chain Reaction.

The cover art of the core rules for Polaris http://www.polaris-rpg.com/ was a large part of selling it to me.

And I bought the Wraeththu book despite it having post-human genitalia on the cover. What were they thinking?!?!

Tales from the Floating Vagabond. Bought at a Gen Con on the basis of the Jim Holloway cover and a quick glance through it which made it look like fun… but it isn’t.

The great thing about Tales is that the astonishingly poor binding meant that the attractive cover was soon all you had left.

And I bought the Wraeththu book despite it having post-human genitalia on the cover. What were they thinking?!?!

I hadn’t heard of Wraeththu, so I looked it up. It sounds as though post-human genitalia on the cover is somewhere between par for the course and the least of its problems.

Amazing Engine’s approach to multi-universe gaming was part of my problem with it. That and it was too rules-light while still feeling like an 80s game.

That said, a couple of the universes are really neat; I still need to track down a copy of The Once and Future King (aka Camelot . . . In . . . Spaaaace! from what I can tell).

The thing I like: you can run a succession of games in settings A, B, C and so on, and there is some idea of continuity from one setting to the next: player 1’s PC is still the strong guy, PC 2 is the social manipulator, and so on, and their stats slowly increase with earned experience.

That’s also the thing I don’t like, because if a player wants to switch roles he’s going to have a tough time of it.

I hadn’t heard of Wraeththu , so I looked it up. It sounds as though post-human genitalia on the cover is somewhere between par for the course and the least of its problems.

Wraeththu gets a lot of undeserved hate, lots of it with deeply homophobic roots. The writer who said “this is the best game mechanics Evah” deserved everything he got (it’s a clunky, crunchy system reminiscent of Aftermath, and has some seriously broken bits in combat). However, the reviewers who said the game is all about rape are - at best - as deluded as the people who said D&D is all about demon worship. At worst, they are a bunch of lying [insert swearword of your choice here] who deliberately found the bits describing what evil bad guys do and then told the world that committing those heinous crimes is compulsory for all PCs.

I note with interest that the internet has not fallen on the heads of the creators of Sins, the RPG I’m reading now, despite the fact that Sins PCs are lithe and attractive, mutated humans with magic powers who can sometimes get ‘psychic power’ points back by having sex with people or by torturing people. Which is pretty much Wraeththu… but with the addition that in Sins you’ve got a demon inside you and it will take you over and massacre all your loved ones and several passers by.

Because psycho killers are much more socially acceptable than guys who can get pregnant.