To my hugest surprise I have managed to find 3 among my local friend circle who are willing to try and learn this game from me to play remotely. We’ve decided that we need to separate teaching and playing into two sessions because of reasons. The players all have experience playing complex games so I am not starting at zero.

Tomorrow I have a timeslot of 90 minutes to get them all on jitsi/TTS and explain how to play the game. Except for mod-specific issues the technical side shouldn’t be problematic. The actual game will take place Thursday/Friday or Saturday.

So I’ve played the game before, but I haven’t had to teach the game. So: I am asking those of you, who have taught this to others, what are the specific pitfalls?

I really want this to be a success because those same people have also indicated a willingness/interest to play Oath, On Mars and Beyond the Sun with me on TTS and as they are local I may eventually have a group to play the occasional monster game

Can’t think of any specific pitfalls. There’s just a lot to cover, and someone will get deeply confused about something. In one case, that was the two different limits on battle action strength. That’s not particularly confusing though, and doesn’t need to be called out when teaching.

How feasible is it to just ask them all to read the rulebook? I know most groups have a habit of making one person explain the game to all the others, but the Pax Pamir II rules are well written, sequenced usefully, and not hard to read. The total amount of time expended per person is similar to a teaching session, and there is less scope for the ‘you never told me that’ problems that often arise when people have not read the rules.

No, way I’ll make all of them read the rulebook. Especially not after offering to teach… at least one of them is way too busy to read it until tomorrow.

edit: But usually here it is whoever proposes a new game is responsible for knowing it inside out and the more complex it is that also includes the teachy part. So usually me or one other person.

Obviously this is basic stuff, but focus entirely on the big picture for a while - the four, maybe less, dominance checks being the only moments in the game when you score, and what that scoring involves and represents. Perhaps even sandwich the rest of the rules with that. Open with it, and review it at the end.

Nothing to add but… Oh god, I’m not sure I would teach this to apprehensive players via TTS. Especially if the future of playing heavier games with the group depends upon it. It’s so much more difficult than in person.

So I sent everyone the rulebook, the Game in a Nutshell video and printed out this handy sheet for myself: BGG Pax Pamir Teaching Guide and the previously mentioned Easily Forgotten Rules Sheet

I have great confidence.

My gut feeling is that for games like Pax Pamir II it probably helps to encourage a ‘fast’ first game where everyone just tries out the actions without agonising too much about the game state or getting too worried about who might win/when. I did this to learn Pax Renaissance via TTS, and it allowed me to get a bit of a feel for the mechanisms in a sort of sandbox environment without worrying about aiming at win conditions. It’s over fast, but possibly more likely to leave people wanting more. That recommendation only makes sense if you think they’ll come back for another go, though.

My plan is to give them a good overview and then play a couple of turns maybe until a first dominance check comes up. At least one person present is comfortable just starting to play and learning as they go and I suspect the others are as well.

We aren’t going to be able to finish a whole game in the time we have tomorrow… because scheduling issues. But having played a couple of turns should make it easier to figure out “how playing feels” and jump start the actual game towards the week-end.

I am confident that Pax Pamir 2nd is a great game and if I am able to do it justice in any way they will want to play the full game.

Happy to report that the teach went well enough and indeed all 3 players had either read the manual or watched the video I sent them so it was a lot easier.

The cheat sheet and a practice teach on my partner helped as well. With the punctuality and technical problems that occur with remote play, my teaching slot was down to an hour and it took me that long even with everyone already having a basic grasp of the game.

After one person had to leave, I played until the first dominance check with the remaining two, giving pointers for good moves every once in a while. While they both complained they had no idea what they were doing, they were actually doing pretty well. One handily won a dominance check with 5 points over my 3 and the other set about spreading spies everywhere and was set up to win the next check within a few rounds. My plan was to just change my loyalty enough to make sure I got points with every check

I would have liked to post this in the pbf Pax Pamir thread, in response to @chrislear , but that thread was lost when the SU&SD forum closed.

Anyone remember his suggestion to implement a dominance indicator, to show who would score what if a dominance check happened right now?

Well, it’s finally done! With the aid of a much better programmer than I. So happy to finally have this feature hammered out. It was actually much more work than automating scoring would have been, but I prefer providing information over automation. 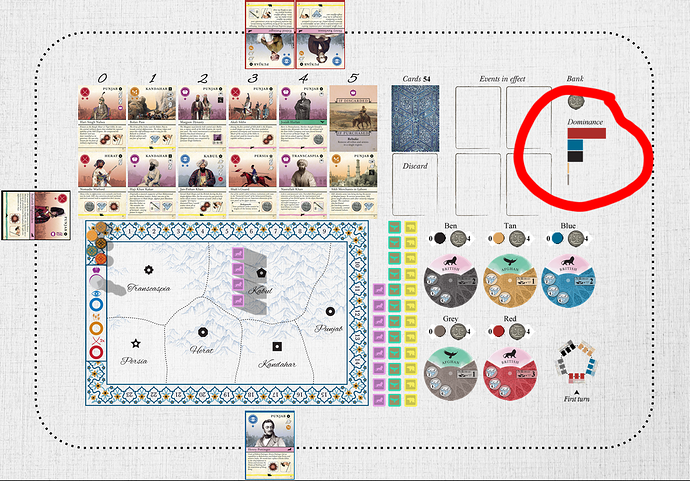 Did I not save this thread for you @Benkyo ?

The mod still looks so much better than the TTS mod…
Maybe now that my friends know the game, I can introduce them to Vassal

Nice work. I looked briefly at the vassal mod code/tools and didn’t take long to realise that it’s a very difficult environment to work in. Credit to whoever managed it.