aren’t “your trade agreements” the TAs you hold , and not those from your faction ???

Good question. All the card says is “your trade agreements”.

I think it seems more likely that the ones I hold are exhausted? More a punishment for me than everyone else? But I suppose there are similar encounters. What does everyone else think? Maybe I’ll ask on BGG but I suspect someone already has.

What’s the card called? Is there a picture?

‘Cardassian delegation’ is the card. I’m having a Google but no luck so far.

There’s a xenophobic card that cancels all trade agreements. What’s the wording on that one?

Well, Googling led me back to this forum

. I’m happy to go with it being the trade agreements I hold, rather than the Klingon Agreements I’ve given out.

Here’s the card image. Does blue usually mean good? Although it -would- be good if I was Cardassian. 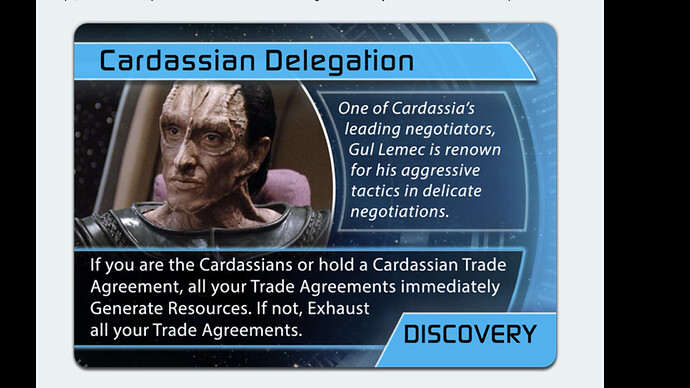 Didn’t find anything on bgg.

Ok. So the first half of the card says your trade agreements generate resources.

Do we think that’s for the holder? Logically it would be the agreements they hold they would then be exhausted?

Being logical and following the theme, it seems unlikely to me that aggressive negotiations give resources to the other players honestly. I think throughout the card ‘your trade agreements’ must mean ‘Trade agreements you hold’.

I think that’s just more poor/ ambiguous wording personally. The theme of the card suggests it’s the agreements you hold to me.

I have no idea!

Moved everything over here.

So I think a strict reading supports “your TAs” = “the TAs that say [your power] on them”.

But I’m usually on the other side of this argument, because with these game designers, you can’t rely on strict reading. And thematically I think “the TAs you hold” makes more sense.

I’ll make the change, and raise a BGG query.

I’ve just asked, Roger, so no need to duplicate.

… yet it would be strange for an Exploration card to only affect rivals instead of the actual active player who explored the system!

Exploration: Cardassian Delegation. You are not the Cardassians, so you immediately exhaust your TAs.

As a side note… regarding this card. In reality, that card should have been discarded and a new one drawn simply because we have no Cardassian Players in this game (our play group decided because it is a Cardassian player expansion card; which normally would not be in this deck). But also, if we did have a Cardassian player; if you read this description of the card, you’ll see that it should only affect the player who drew it and not a detriment to all other players (as it seems you have done here). ie. The player who drew the card, should have had all their TA’s in front of them exhausted because 'they had to deal with this delegation and therefor it affected trade they would have otherwise gotten from other players.

Cardassian negotiators may seem thuggish and combative, but they are subtle manipulators, often extracting concessions from their established trade partners. A Cardassian Delegation enriches the Union, ensuring that vital resources flow back to Cardassia Prime in greater quantities. The Delegation may also benefit a loyal friend of Cardassia boosting their bounty as well. However, the meticulousness and detail of Cardassian negotiations will mire unaligned rivals in bureaucratic red tape, with valuable shipments of resources lost to onerous regulations as they host these Cardassian disruptors. (ref: GF9 website for Cardassian Expansion)

A post was merged into an existing topic: Star Trek Ascendancy game 6

In reality, that card should have been discarded and a new one drawn simply because we have no Cardassian Players in this game

It’s fine to propose that as a variant, but this discussion was about how to interpret the card.

As discussed above, and on BGG. I moved this out of the main game thread so as to avoid cluttering it up.