I had the privilege of attending Spill-O-Rama in Stavanger Norway these last few days. It’s an invite only event that runs Wednesday to Sunday. I only attended from Friday but British pounds to Krone is a tough step so my wallet is less upset about the truncated visit than I am. I landed late on Thursday and sat up even later drinking some delicious local beers and catching up with the friend I was staying with and who got me the invite.

The convention was excellent. Had a really relaxed vibe, no issues, no hassle and tons of people being really in to games. It was suggested I take slippers with me and change in to them at the convention. Being English this seemed the maddest thing, I caved though and it turned out to be an excellent idea. Nice and comfy, less sweaty and added to the relaxed nature of the con. Lots of people were similarly in thick socks or slippers so the acclimatisation process was really fast. 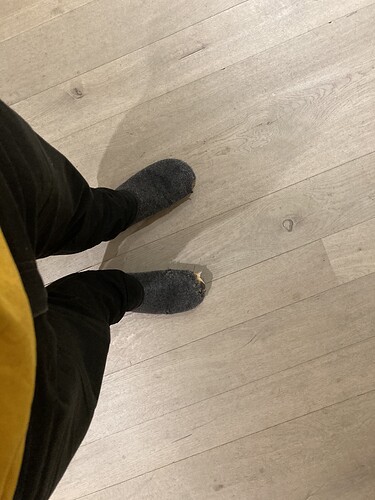 All around one room were tables where people just stacked up their games. There was a lot of loaning out going on. I was impressed at the lack of trouble that any of this caused. Maybe it would work at something equivalently small in the UK. The event had about 140 people all told I believe. Also final day there was a raffle for everyone, name badges in a box and as they were drawn there were games from the sponsors. I was so late in the selection I didn’t take anything as nothing seemed to be decent enough for a plane and train trip with extra bulk.

Friday began with a hangover, extreme tiredness and a game of Dogs of War. My first play and I thoroughly enjoyed it. The sheers ruthlessness baked in and the scope for betrayal and clever plays is really good fun. Full 5 players which seems ideal. I finished 3rd with a seemingly respectable 50 points. 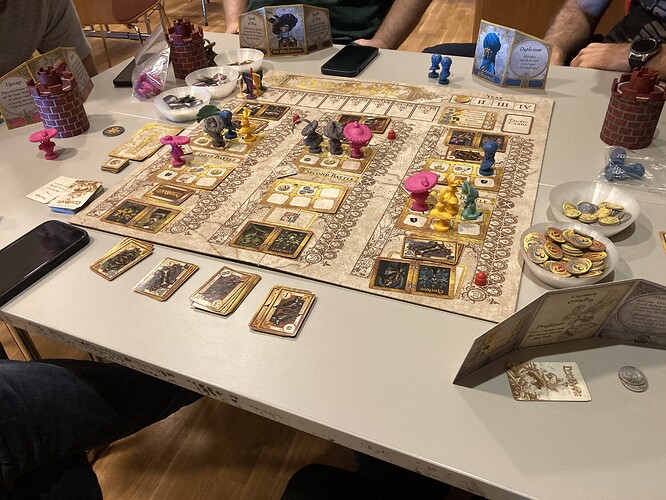 Second game was the ever excellent
Burano. 3 players and started with a teach. Brilliantly both the others really enjoyed it, so I’m hoping next time I visit I’ll have some more experienced opponents to play. As ever I’m impressed at the fun with blocks, the relentlessness of the tough decisions in game and the battling constraints. So few actions, so much fun. 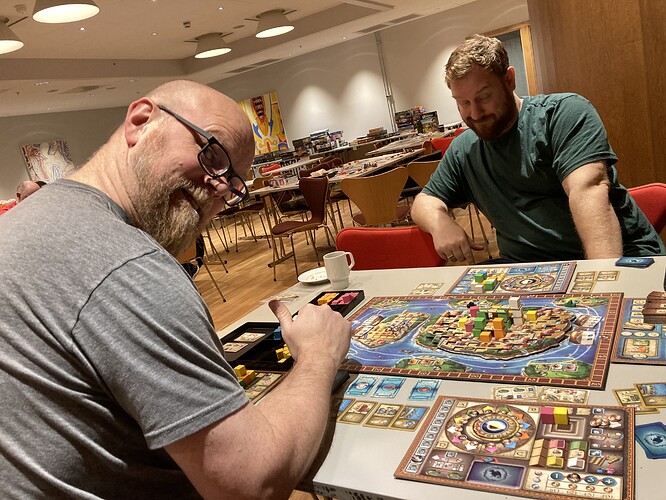 Last game on Friday was a 6 player game of Eclipse.Played a full fancy kickstarter copy of the game and it was still as dull as dishwater. I won handily, 44 points to second place’s 29. Definitely helped by sitting next to someone who just drew bad tiles so didn’t really get going at all. It just takes ages to get going, the ship upgrades don’t excite me and seems weirdly arbitrary for a 5 hour game. Second play hasn’t seen it improve in my estimation. Fortunately the con atmosphere and evening beers made the experience fun. 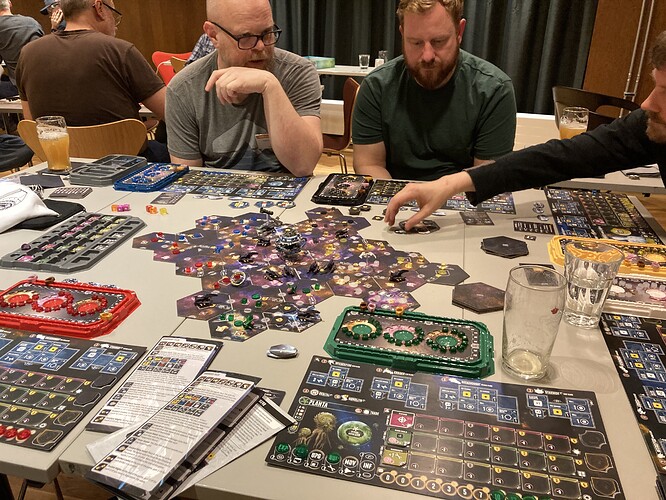 Saturday began with an excellent game of 1889. 2 players in their second game, 2 vets who’ve been playing for years and me. I carried on breaking my previous conventions here again. I had 1 private the one that could become a yellow share. I started off no companies in SR1 but here I bought multiple shares in both companies that floated. Sat tight for a bit and in SR3 sold off my shares straight up so got max value and founded brown company. I ended up with 3 companies which won it for me. 3 directors shares was nice but the big injection of cash with the end game founding of a last company saw me buying a 6 that instantly got traded in for a diesel train stripped 3 of the other 4 companies of trains and the emergency purchase the leader was forced in to ended up being just over how much I finished ahead of them. Took the win on this and continued my streak. Nice relaxed table with plenty of chatter and fun. Also we played on a Deep Thought version so that felt cool playing on a hand made edition. Also has me excited for my kickstarter new version to arrive all over again. 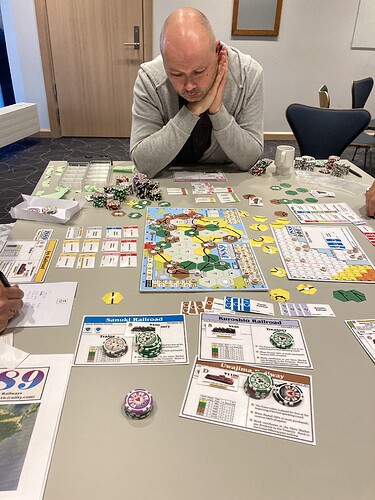 Next I played a prototype of a new game from Eilif Svensson, I’ll gloss over this a bit but my winning streak continued. Really good fun again. 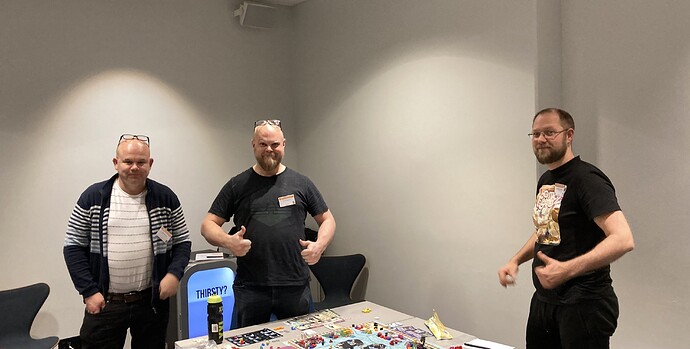 Last game of Saturday was a 4 player Calimala. Taught this and played with my host and his regular group. Another big hit with the table, Jone and Fredrik are really excited to carry on playing with Rolf’s copy. Squeaked out a win to keep the streak alive. Completely ignored all land deliveries which seems risky but might also be efficient. I managed first place in 3 of the final game scoring cards and second in one which helped immeasurably. Especially as I finished second in most during the game scorings I was in. Then retired back to my hosts house and another friend came over and we drank the wee hours of the morning away. 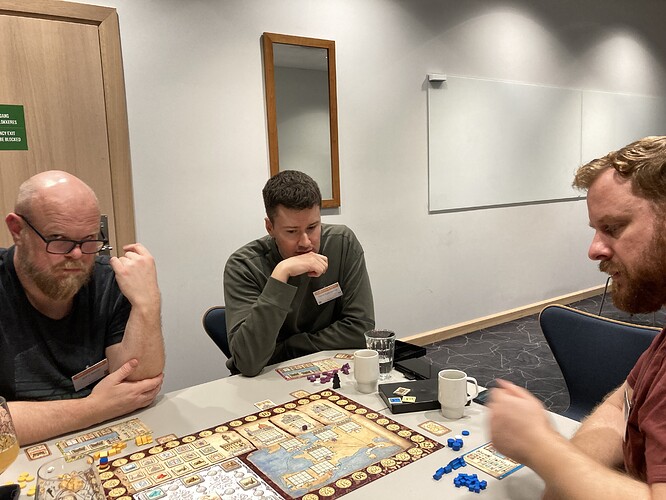 Last game of the weekend was on Sunday morning and we continued the beige euro segment as El Grande hit the table. My first play of this and it was big. Another one I was really impressed with from the first play and also finished right in the middle of the pack score wise. Would for sure play again but not likely to buy any time soon, although would if it gets back in to stock and I have a space on the shelf. 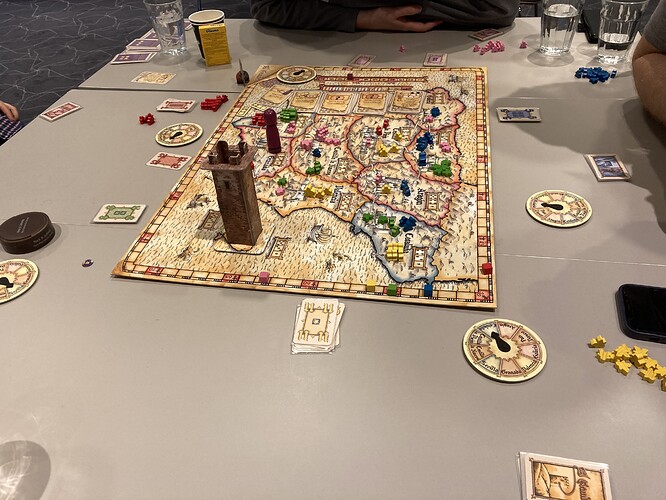 Rolf my host is a good friend and so on top of the convention spending time with him was a really good holiday. Mainly my cost of staying was teaching games to his friends so he doesn’t have to, a service I’m happy to provide.