Recently I was reminded of an old idea I had for a slice-of-life campaign. I enjoyed the Hataraku Maou-sama novels, but mostly the day-to-day parts about living in cheap flats and working in a burger shop. I was thinking about trying to put together a game along those lines.

(brief synopsis: a bunch of classic Good Hero, Evil Demon-King characters get dumped in the real world and have to get by, with virtually none of their supernatural power left)

Now, the actual series increasingly spirals into world-hopping, mythic metaplot, and other things that are a lot less interesting to me. What I’m envisioning is trying to run a small business, bickering with former enemies, and just once in a while mustering up a few sparks of Metaphysical Chaos to help take care of a big problem.

I suppose the question is, would it be fun?

I’ve seen the anime, not read the books. You might also consider Saint Young Men, in which Jesus and Buddha are flatmates for no adequately explained reason.

I think one would have to present it the right way. I mean, AD&D DMG: 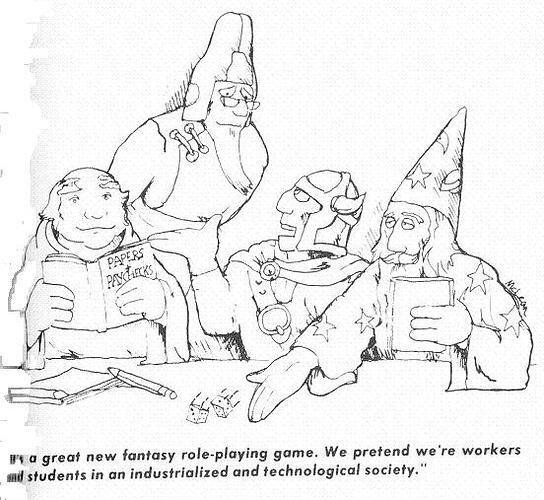 552×507 58.1 KB
I think escapism is a significant part of why I do RPGs and I don’t really want to escape into something that’s like my normal life only worse. But with the right players, and a sufficiently soap-operatic sensibility, it could work. (I suspect one might look hard at trade-offs: if I squash the problem hard now, someone will be irked at me…)
2 Likes
yashima August 11, 2021, 2:56pm #3

I am not familiar with the series you mention.

I once ran a campaign where in a somewhat risky move I had the players play themselves in an Unknown Armies campaign. The slice of life parts where they played out normal day to day activities that got interrupted by the campaign‘s horror elements worked really nicely… like having an RPG session in an RPG. But it was the unusual elements that made up the plot and that were what engaged the players. The risk payed off, the campaign was great, maybe even legendary and we managed to get to a conclusion when we had to switch to play by mail as some players moved away.

Having all the normal stuff as a backdrop was good, much better than the usual traveling troupe of misfits… but what made the game was not „slice of life“…

That’s published as “The Devil is a Part-timer” in English, I believe from your description. Haven’t read the novels, but enjoyed the anime. I think as long as you can lean into the silliness of the idea, it could work. PC’s just trying to run their business when their arch-enemy hijacks a supply shipment. Sure, they could call the police, but this is a matter of honor, so they have to track it down themselves. Or imagine the fun when the toilet clogs in the bathroom and they have no idea about plumbers or how such things work!

I suppose the question is, would it be fun ?

It comes down to what you find fun in gaming. I don’t generally like co-op games because they too much parallel my day job. If an rpg is focused on finding and keeping a job, a romantic partner, and/or a place to live, will it feel too mundane and not provide the escapism that many seek from gaming? In a boardgame like The Pursuit of Happiness, it’s just the theme of a worker placement, resource management game.

Thanks for all the suggestions.

That’s published as “The Devil is a Part-timer” in English, I believe from your description.

That’s the one. I couldn’t remember at the time.

Having all the normal stuff as a backdrop was good, much better than the usual traveling troupe of misfits… but what made the game was not „slice of life“…

Yes, that makes sense. The mundane parts give some continuity and scope to pursue personal goals (learn to cook, buy a table that doesn’t have to be propped up with the Sceptre of Celestial Might) rather than sitting around waiting for mysteries. And it also gives the characters something tangible to care about and protect, which the players can (hopefully) feel invested in.

PC’s just trying to run their business when their arch-enemy hijacks a supply shipment. Sure, they could call the police, but this is a matter of honor, so they have to track it down themselves. Or imagine the fun when the toilet clogs in the bathroom and they have no idea about plumbers or how such things work!

Yes, definitely. Being undercover is also going to be a complication and a source of things to do. Every time you talk to the authorities risks someone picking up on your fake identity. You might not be able to take care of mundane problems in a mundane way, let alone anything genuinely strange.

Indeed, within the context of a greater campaign, dedicating a session to the “ordinary” aspects of the character’s lives separate from the shenanigans of the campaign, could be quite refreshing.

So maybe it’s worth thinking about this as more like a variant of, oh, Pendragon or something? With a humble ‘kingdom-running’ element alongside the more adventurey bits. Burger-Kingdom-running, I suppose you might say.

I don’t really want to escape into something that’s like my normal life only worse.

Oh, absolutely. I wouldn’t want to play a grim, realistic campaign of getting by on a minimum-wage job. One of the reasons I like the series is because through the characters’ eyes, those mundane activities become something grander, and it’s silly but it works.

For example, in Sadou’s eyes, becoming a skilled and trusted fast food employee isn’t qualitatively different from rising to mastery over all demonkind and planning to conquer the world. That’s definitely part of the flavour I’d want to evoke - mapping the type of character that exists in a fantastical realm of mythical powers and epic conflict into something that makes sense in our world.

I suppose the question is, would it be fun ?

I’m the kind if person that plays games for interpersonal drama rather than adventures. I’d go for in-character gossiping about Karen and Hakim over fighting goblin raiders every day of the week. Which is to say, it is a lot of fun, if everyone is in board. Usually helps to have a game designed for that, that sustains that kind if storytelling.

There is a load of slice of life games in the indie scene, or games that contain slice if life moments. That part about running a small business reminds me of Damn the Man, Save the Music!, which is about employees in a failing record store. I’m positive there must be something about a shop in a fantasy land out there, too.

I think I would like the possibility of achieving something – maybe not saving the world, maybe just getting a promotion or copping off with that attractive co-worker, but something which, now that I think about it, would shift it out of strict slice-of-life-ness.

Yes, I think I overemphasised the ‘slice of life’ idea, to be honest.

I feel like this idea could be really, really funny. I picture giving characters a ton of powerful abilities and skills - that are useless at their new job or constantly on the edge of blowing their cover. Make customer service interactions into combat-like encounters, with the heroes struggling with technology, rude customers, and the fragility of their environment compared to their (now useless) might. In keeping with the reverse isekai tropes players could take on the stereotypical roles - hero/demon lord, second in command, enemy that is equally out of their element, etc…

As for a true ‘slice of life’ game (which is not quite what you meant, but I think it’s an interesting thought experiment), I feel like it would take a really special group to actually pull off the tone and pleasurably pure and wholesome beats of a slice of life anime/manga. It’s one of my favorite genres to read/watch, but I’m not aware of a system that really fits the flavor.

One could borrow some of the ideas from Klingon jokes in TNG – I can disembowel you before you even realise I’ve started to move, and that’s how I tend to solve interpersonal problems, but instead I have to try to make sure you are happy with your burger.

An useful idea piece for this, stick with me here, could be the reformed demon pc type from Palladium’s Mystic China supplement to Ninjas and Superspies.

Mechanically, as that character gains levels they lose powers and become a human at the end of the progression.

I suspect we’ve all done some of this when the mage with the fireball has to haggle over dungeoneering supplies, the murder machine cybersamurai negotiates with Mr Johnson for a better fee, or the ancient vampire assassin has to break into a pawn shop to steal guns because he’s cash poor.

The champions group I played with used to do this as the session opener. The GM liked situations that tempted the character to use powers in mundane life. There wound up with two levels of social relationships with the characters. Out of costume with other heroes was very different from our of costume with civilians around and was fun to play.

I picture giving characters a ton of powerful abilities and skills - that are useless at their new job or constantly on the edge of blowing their cover.

There’s actually an RPG designed specifically with this kind of story in mind: SUPERNORMAL.