I am thinking of getting my friend with the 3D printer to print “no clue” markers (that I would have to paint or color code) because as far as I remember the game just has you put zero cubes … but the BGA implementation actually lets you know all the tiles that were placed since that card was drawn that had zero clues. Which is more information than the cardboard game tracks and I think that helped us a lot.

At Local Game Group this evening, Flash Point Fire Rescue. 2-door map, went from “OK” to “much fire” to “OK, we might manage this” to a loss on damage cubes with five victims saved, four of them in the last turn. I still love this game. 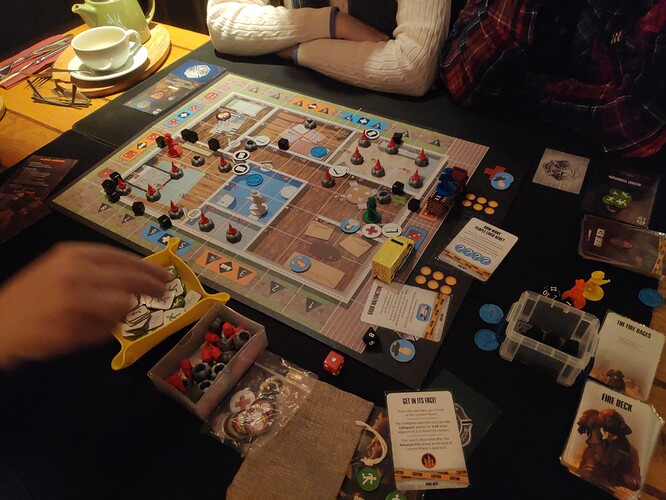 Power Grid - played on the veterans table again. We don’t have much time, and so I suggest we play with Benelux (Belgium + Netherlands + Luxembourg). It was tense and the pace is indeed fast as the Benelux map scraps the lowest value power plant every round. Fierce fighting on positions that I went for the “inefficient path” a few times just to secure key points. I was 1 Euro away from winning. Sucks.

Magna Grecia - a game designed by Colovini and Schacht - which took my attention. It felt like a train game and it was too much like a train game but it’s not, ergo I’d rather just play a Cube Rail. But it’s good tho.

Hats -argh! I love this game. It is very old school but with nice art. Indeed, it was published by the same company as Iwari and Spirits of the Forest

Krieg und Frieden - build a chonky Cathedral. Another old school game. Meh but I had a good time at least.

Had a fun but funky four-player game of Nusfjord with the mackerel deck. No one was very psyched about the buildings, so while the other players all built a few and were getting some ships and elders, I mostly paid attention to my timing to be able to pick up shares. We were joking about me not caring about fish at all and just being an investment banker, and then what card do I happen to get in my hand when the C cards are distributed? The bank center. One gold for every issued share you have in your supply (in my case, 7 when I built it). 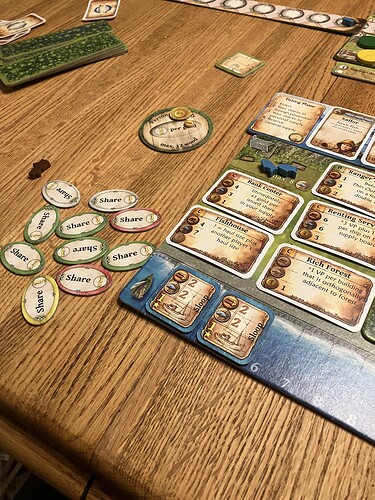 The fish I was getting from everyone else also meant that with my small haul size, I was able to purchase the big points of the fishhouse, even though I had to pay 17 fish (aka everything I had) for it. Ended up pretty much allowing me to run away with it in the end: 37 to 31 to 30 and 30.

My boys are now utterly obsessed with Cosmic Encounter, as is one of their friends. They played another 3 games last night (they’re even playing without me!).

They’re all coming in well under 45 minutes.

We’ve only had one issue of the youngest getting a bit upset, but he was knackered (and his brother was being a dick!).

Having worried about it being a white elephant after a poor game with friends we’ve now definitely got our money’s worth.

Been playing Gang of Dice in BGA Alpha. I think I mentioned before that I always dislikes Knizia’s dice games. This is fun. I think it’ll be better in person where there’s people around the table goading you

The physical act of rolling the dice would probably make things better as well.

Whats even better: I buy that fancy dice roller from kickstarter.

I played Heat last night and it’s a damn dream come true, and I’ve only been using the basic ruleset so far (plus Legends, the bot cars). I’m delighted with the evolution of Flamme Rouge’s card play/engine, and even more delighted to confirm that it’s very much its own thing.

I don’t want to get too verbose after a first play, but the tweaks to the card play are substantial. Heat isn’t a straight swap for Exhaustion and definitely earned its place on the title. There are also stress cards, which do come into your deck a little more like exhaustion, but otherwise force you to top deck instead of drawing from your hand—a really nice integration (and escalation) of some push-your-luck. Exciting stuff!

I’ll be playing this a lot more ASAP. 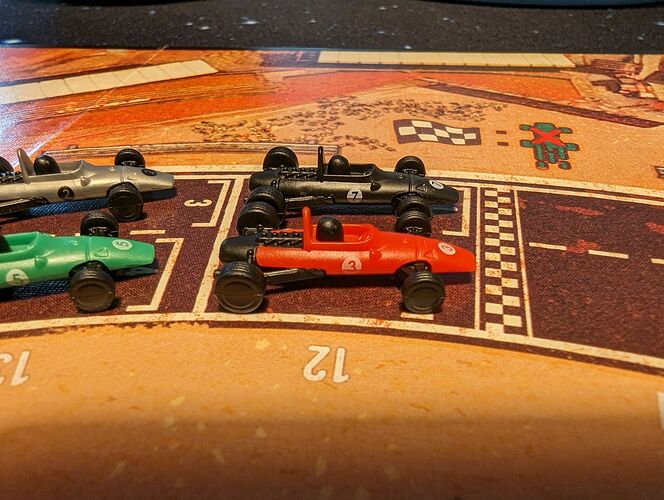 For every dice in the game?

Pax Transhumanity - learning the rules by solo multi-hand. It didn’t felt like a game, but more like a tutorial. So, no thoughts. The game seems wild (as expected from a Pax title) with the switching end game scoring that can change depending on what people will do.

Heat: Pedal to the Metal - yep. More games of Heat! I am liking this more than FR

American Rails - fun Cube Rail! Very derivative of Chicago Express, but here you can start on any city when a new company is founded. The value of a city gets degraded if multiple companies share the city.

The “start anywhere” rule sounds nice and fun. A lot of people will say it promotes replayability, but I disagree with that. This is the same logic as with asymmetric starts. Sure, you start differently, but if the game plays the same way, then, that’s not replayability. A lot of games do this where the start is randomly generated, but divergence of play doesn’t really exist. I feel American Rails is also that. Sure, you can start on any city, but it’ll be a bit silly if you didn’t start in New York, Chicago, Altanta, or on a city that sits in between of two for those cities mentioned. Still, that is variance. Thanksfully, it’s a Cube Rail, so there’s divergence of play on the overall positions on all companies at the start, who holds what shares, and which company will grow fast and in what order.

As first play, I’m obviously not sure on how deep this game is compared to Chicago Express

Heat: Pedal to the Metal - yep. More games of Heat! I am liking this more than FR

So far, me too, and in a big, big way. It’s kind of ruined Rallyman for me. I am curious how things will shake out long term though. One of the great joys of FR is that it’s so streamlined that high level play becomes a really cunning card game. Heat’s shift in focus to the track has me thinking it’ll never quite reach those heights of direct player interaction.

My partner and I got through a first lap of a game last night on the France circuit, but got interrupted by the baby, and that was that for the night.

In a move that probably illustrates how hot I am for Heat, this morning I “saved” our game (set aside our decks and took a photo of the board state) and ran a solo game in Great Britain. I only made third, but in my defense I forgot about the double-corner rule for the bots in the first lap, which put me behind early on. Still a fun race and I felt competitive to the end. 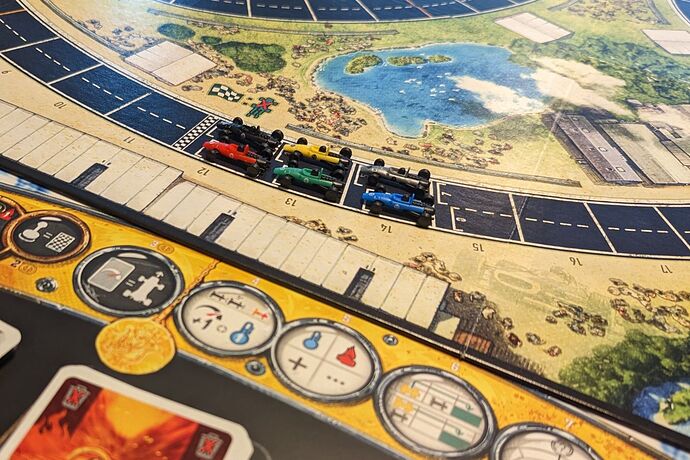 Maybe I’d better be careful about playing it, as I may be demoing Rallyman GT/Dirt for HGG next year.

Everything I see about Heat is how enjoyable it is. I need to find someone who owns it and get a game in

i need to make my local friends get a copy. maybe the ones who already love FR which i didn’t enjoy when they brought it to the table but it may have been a fluke dislike and i might now enjoy it. it’s been years.

I’m not gonna lie, man: it fixes a couple of the big niggles I had with GT, while offering up the same excitement level. Between the lightning fast setup and the really satisfying straights, I’m hard pressed to think of a reason to table GT over Heat. Surely Dirt (and GT via the Rally-X extension) will change that some.

[EDIT] Let’s be real here though: I’m hooked bad and Days of Wonder is gonna milk this hard for maps at a minimum if it’s successful (and the base box and map boards are already clearly demarcated for 8P). At some point my wallet is going to really miss that fiddly setup.

So far, me too, and in a big, big way. It’s kind of ruined Rallyman for me. I am curious how things will shake out long term though. One of the great joys of FR is that it’s so streamlined that high level play becomes a really cunning card game. Heat’s shift in focus to the track has me thinking it’ll never quite reach those heights of direct player interaction.

It’s the Thanksgiving holiday here in the USA, and I played two games of Cartographers yesterday (whilst rendered drowsy by a copious supply of turkey, ham, and numerous side dishes). I did not, at first, feel any enthusiasm for the game, but once I understood it, it’s REALLY fun! I’d play it again in a heartbeat!

Curious to hear from those who have played Heat if the two player experience is an improvement on Flame Rouge. I adore FR but never at two.