I have pre-generated a team of three player characters in 1st edition ForeSight with almost no house-rules, hardly any at all. They are effectives for an NGO that need not be specified until necessary.

Anton AMEHARA is a break & enter expert, wheel artist in three media, wire rat, cobbler, and pavement artist. He specialises in getting into places by circumventing the physical security features. When the team gets somewhere they oughtn’t to be, Amehara opens safes, installs, repairs, and modifies electronic and mechanical gadgets, and plants bugs. 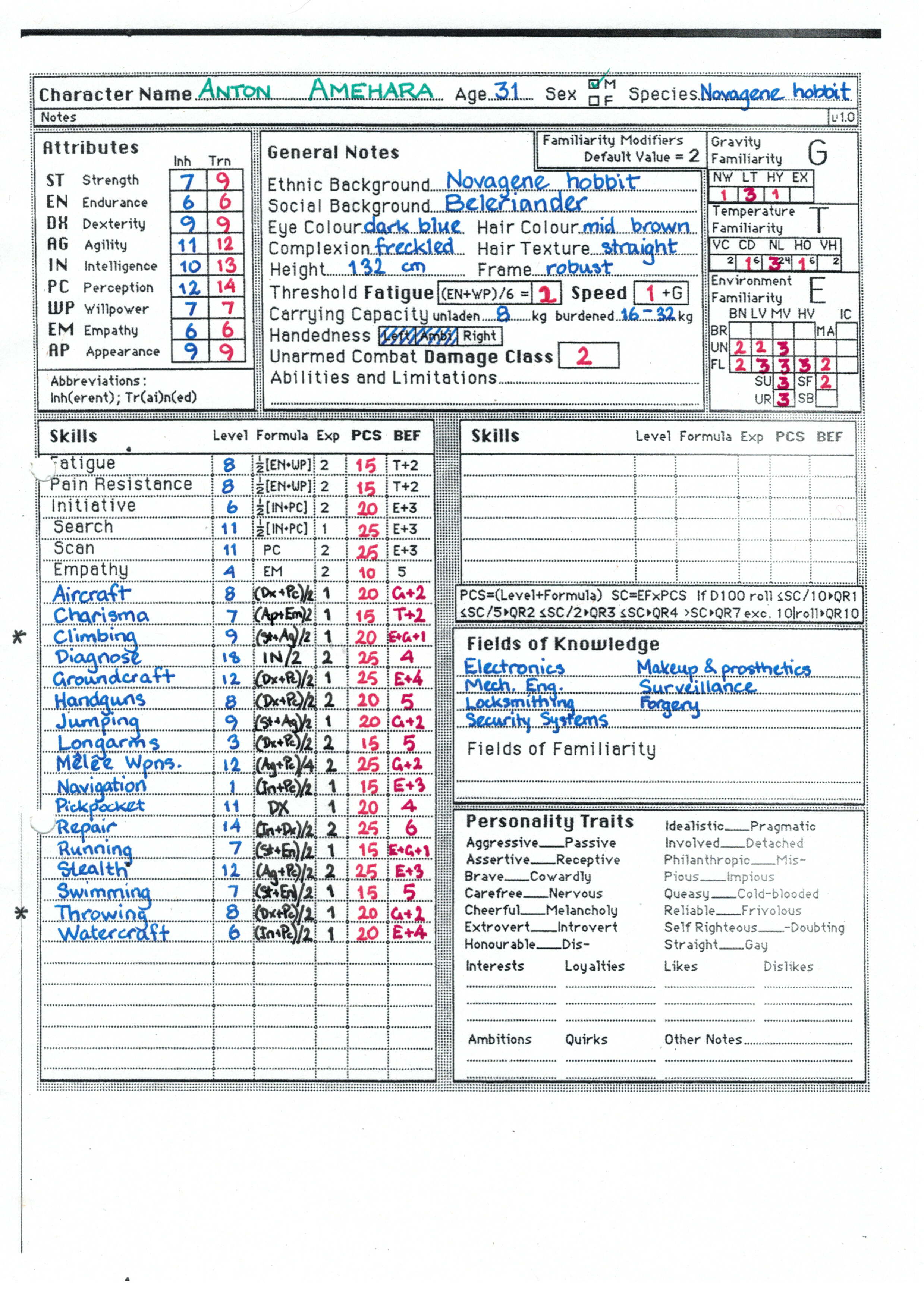 Seven hundred years ago, Amehara’s ancestors were a bunch of Tolkien fans who thought it would be a good idea to have themselves turned into hobbits (using body modification themselves and germ-line genetic engineering on behalf of their posterity). It was not a good idea. Anton is not a Tolkien fan. But he can often pass for a child of ten or so, which comes in handy sometimes.

Oliver BHAREE is an expert in infiltration and second-storey work. He is also a medic (fully trained doctor, in fact!) and a really rather frightening “heavy”. He specialises in getting into places by climbing obstacles and sneaking past patrols. When the team gets somewhere it shouldn’t be, Bharee treats the sick and injured, hurts and snatches people, deals with forensic science issues, and blows things up or burns them down, 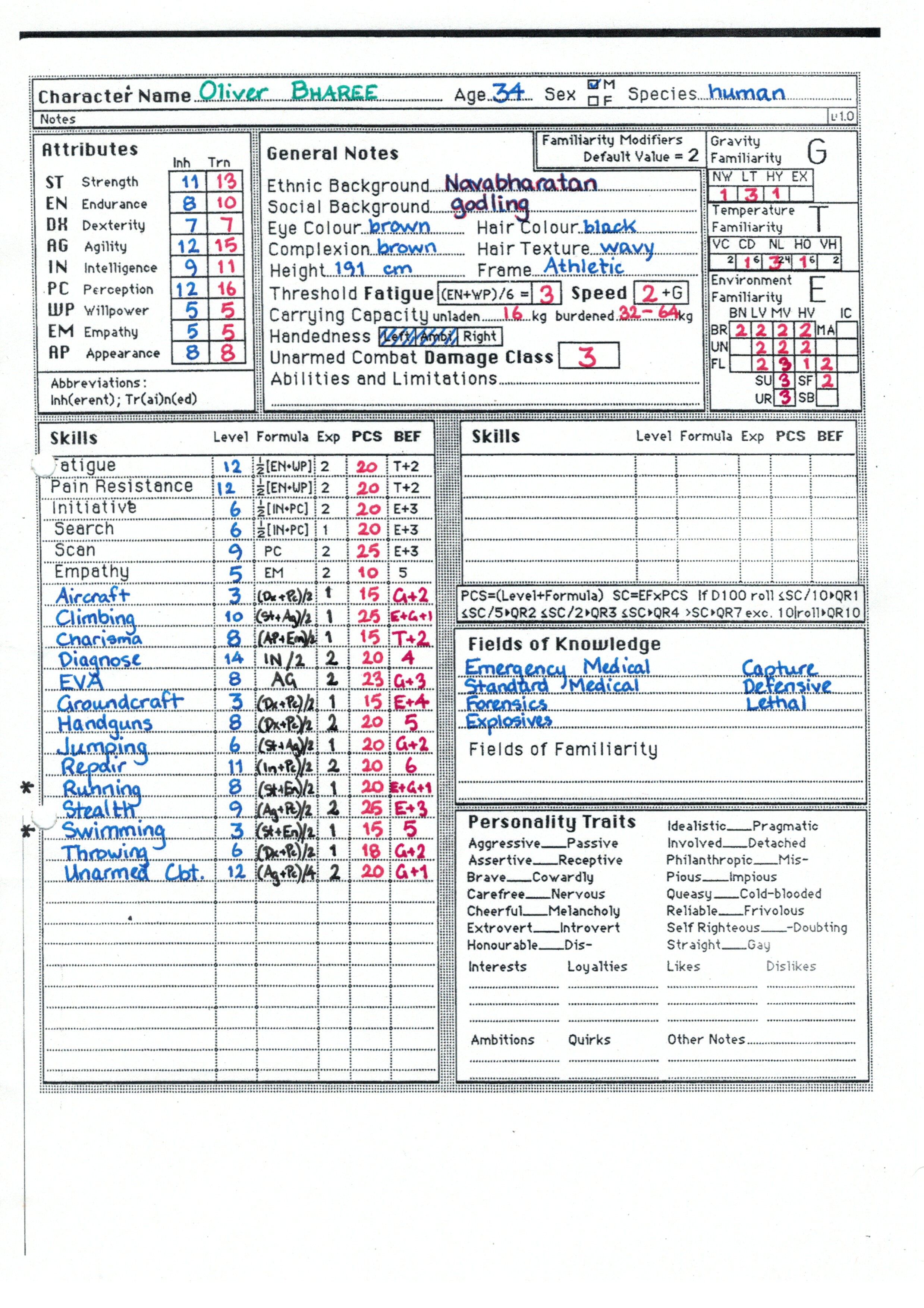 Bahree is a refugee from godhood on Navabharata; it is a high status in a technocratic aristocracy, but he couldn’t come at the extensive body modification involved, and doesn’t fancy being eaten by the poor.

Sigurd CLAUDIUS PULCHER is a cuckoo and “asset handler”, also a hacker and analyst. He specialises in getting into places he shouldn’t be on social pretexts and by tricking people into letting him in; also, he manipulates people into bringing things out so that the team doesn’t have to go in. When the team gets somewhere it shouldn’t be, Claudius Pulcher talks people into or out of things, extracts information from computer systems, and elicits confidences. 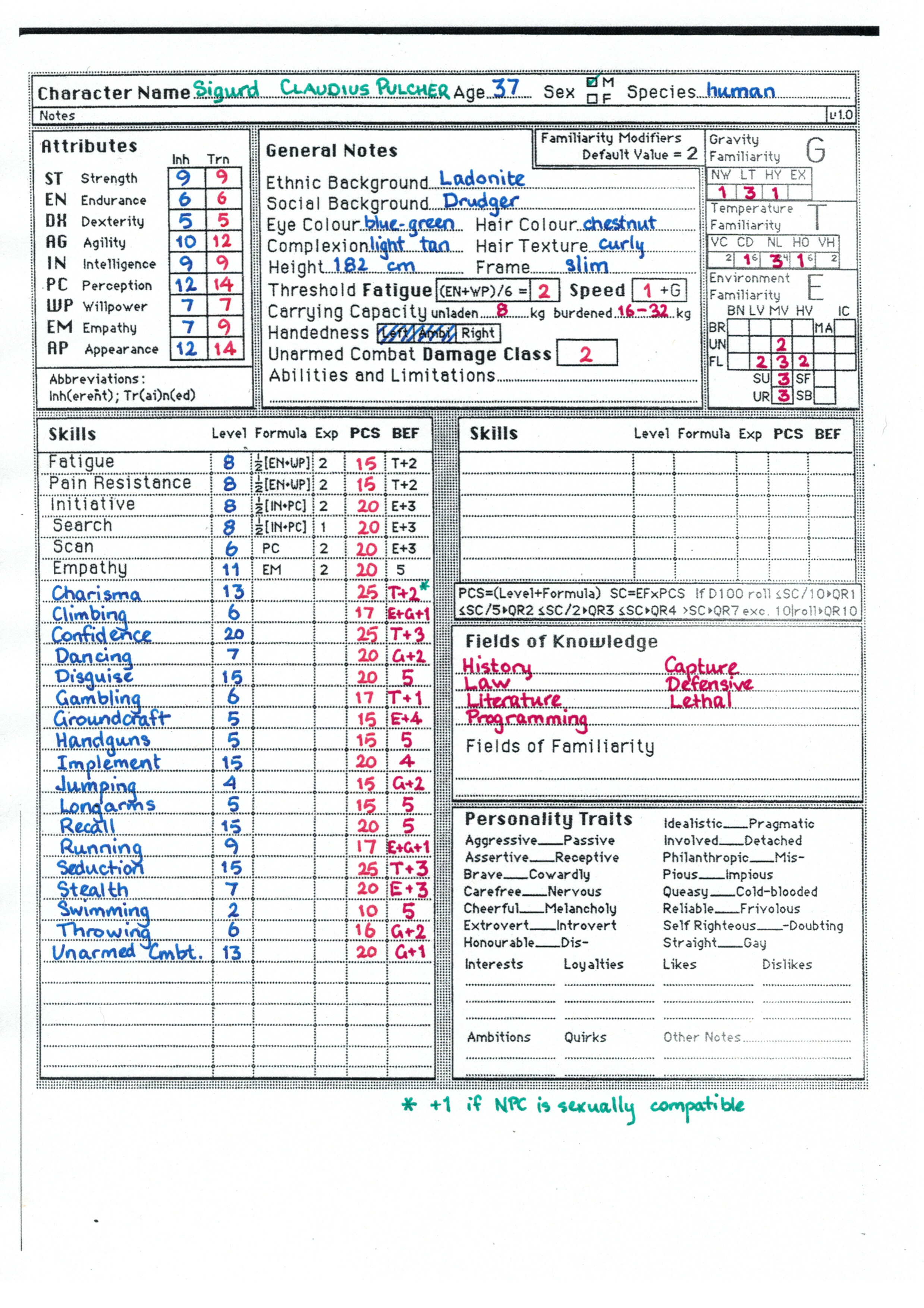 Claudius Pulcher grew up in the “drudger” class on Ladon, a wealthy world where the politically-privileged working class look down on the numerous and resentful “bludgers”. He didn’t like the stultifying social conventions, the class hostility, the specific kinds of work that were available to a person of his skills, or the prospect of being sneered at if he took to a life of comfortable idleness or frivolity.

The team really ought to have female members as well, but none of the players for the adventure I am preparing wants to play a woman, so generating a female PC was not a high priority. Any of these character sheets would do for a female character with a change to which “sex” box is ticked and perhaps a different name.

I recognize the other occupational epithets, but I’m not sure what a cobbler is, or a cuckoo.

I learned those from Ken Hite’s Night’s Black Agents. I don’t know to what extent Hite’s terms reflect actual usage in the clandestine ops community and how much he had to make up to fill in gaps or to sound less goofy. He uses “black baggers” for what I’ve heard called “bacon and eggs”: but that could be a difference between FBI and British usage.

Thanks. Got it. I would have guessed a narrower meaning for cuckoo, from what the bird does . . .

They had “swallows” too, but few roleplayers like to imagine their characters in that line of work.

You might notice as you examine those character sheets that an awful lot of the PCS values are multiples of five, and that might make you wonder whether the game could be simplified in the obvious fashion. If it does you will be disappointed to learn that it is merely a custom of mine when I am generating characters for other people to play, particularly for players unused to ForeSight, to set the characters’ skill levels precisely so that the PCSs work out to multiples of five. I do that to make the multiplications easier for players who have not such a cultivated facility at one-digit by two-digit multiplications, and also so to ease the trick of determining whether a result has come out as a Quality Rating 2 (special), which requires a division by five.

PCSs working out to multiples of five is not a feature of the game, and does not survive the first expenditure of experience.

Here, in case you might be interested, is a draft abstract of the descriptions that the characters might skim on their way in to the location of there next job: Sparta. 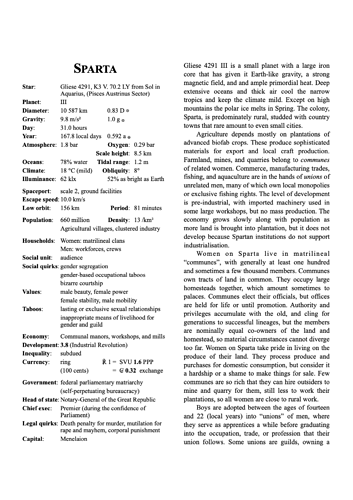 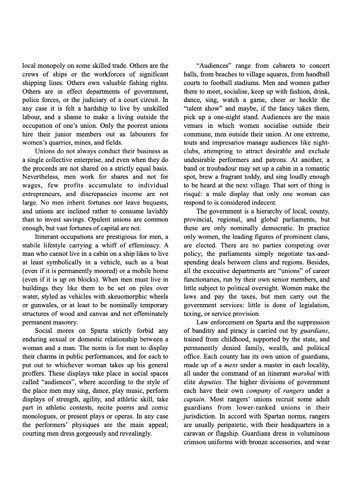 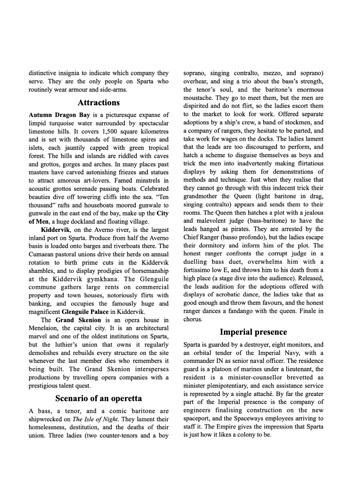 Your cultural sample makes me think of W.S. Gilbert, but in an era when women’s parts were played by boys, as under Elizabeth I and James I.

Well, that’s a good thing, then. I was thinking of The Merchant of Venice, The Pirates of Penzance, Die Fledermaus, and Cosi Fan Tutti when I wrote it.

Nevertheless I think it is too long and not revealing enough of the culture’s anxieties.

They had “swallows” too, but few roleplayers like to imagine their characters in that line of work.

What about sparrows? Or are those two the same thing?

Same thing, as far as I can tell. Both terms appear in the appropriate sense on searches of the Internet.

I use “swallow” because it alone appears in Joseph C. Goulden’s The Dictionary of Espionage, the “Language of Espionage” page of the International Spy Museum site, and Kenneth Hite’s Night’s Black Agents. 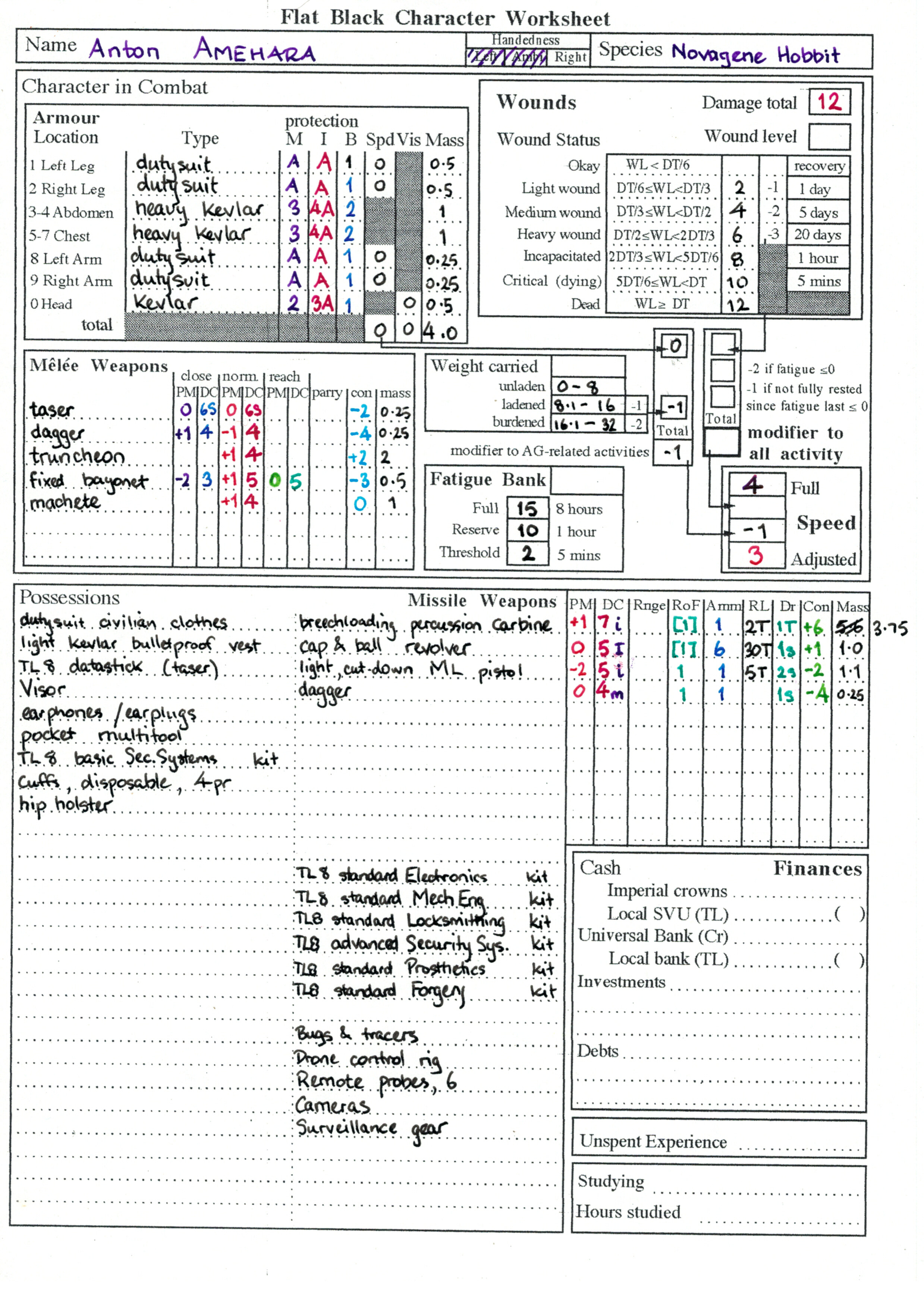 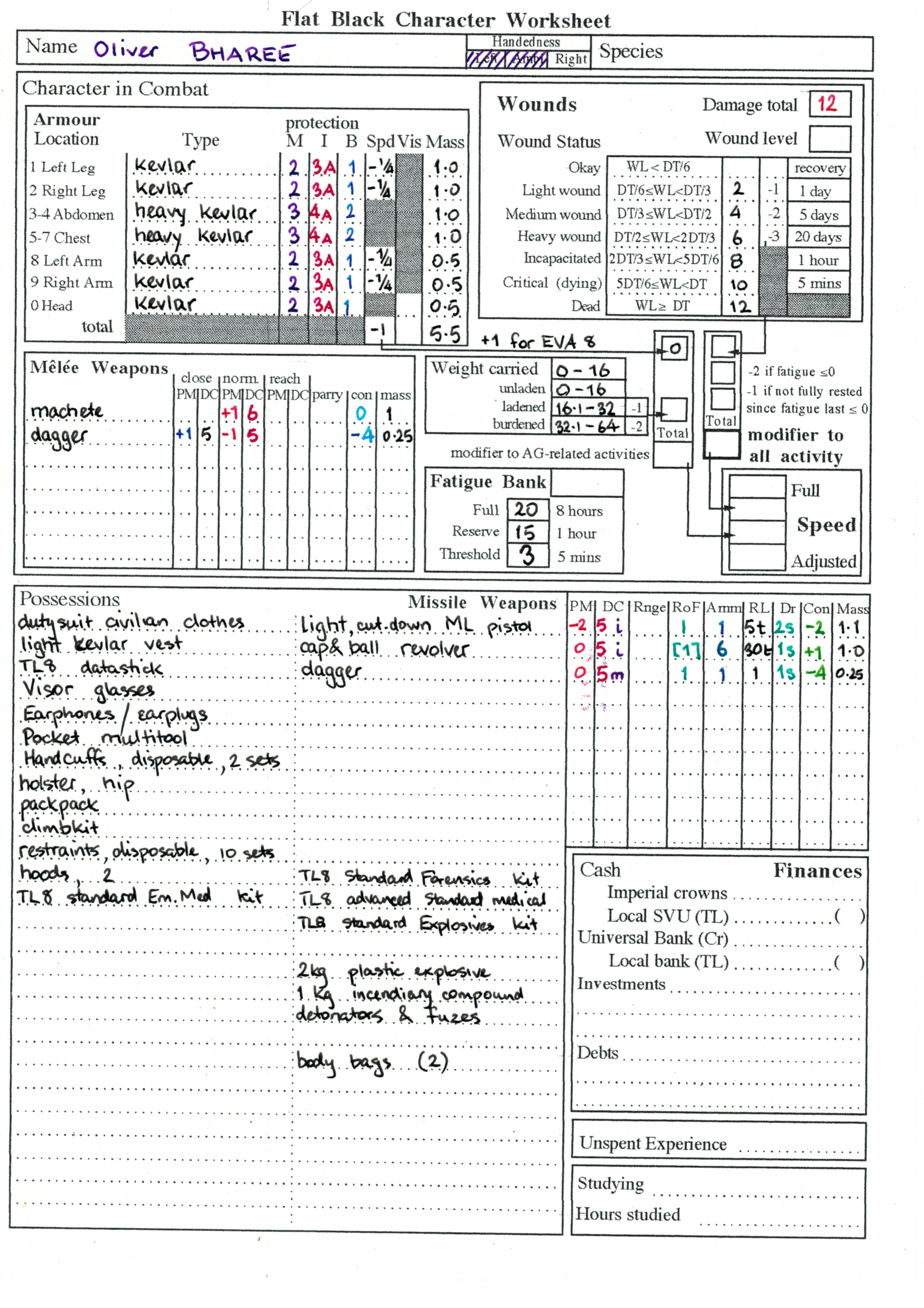 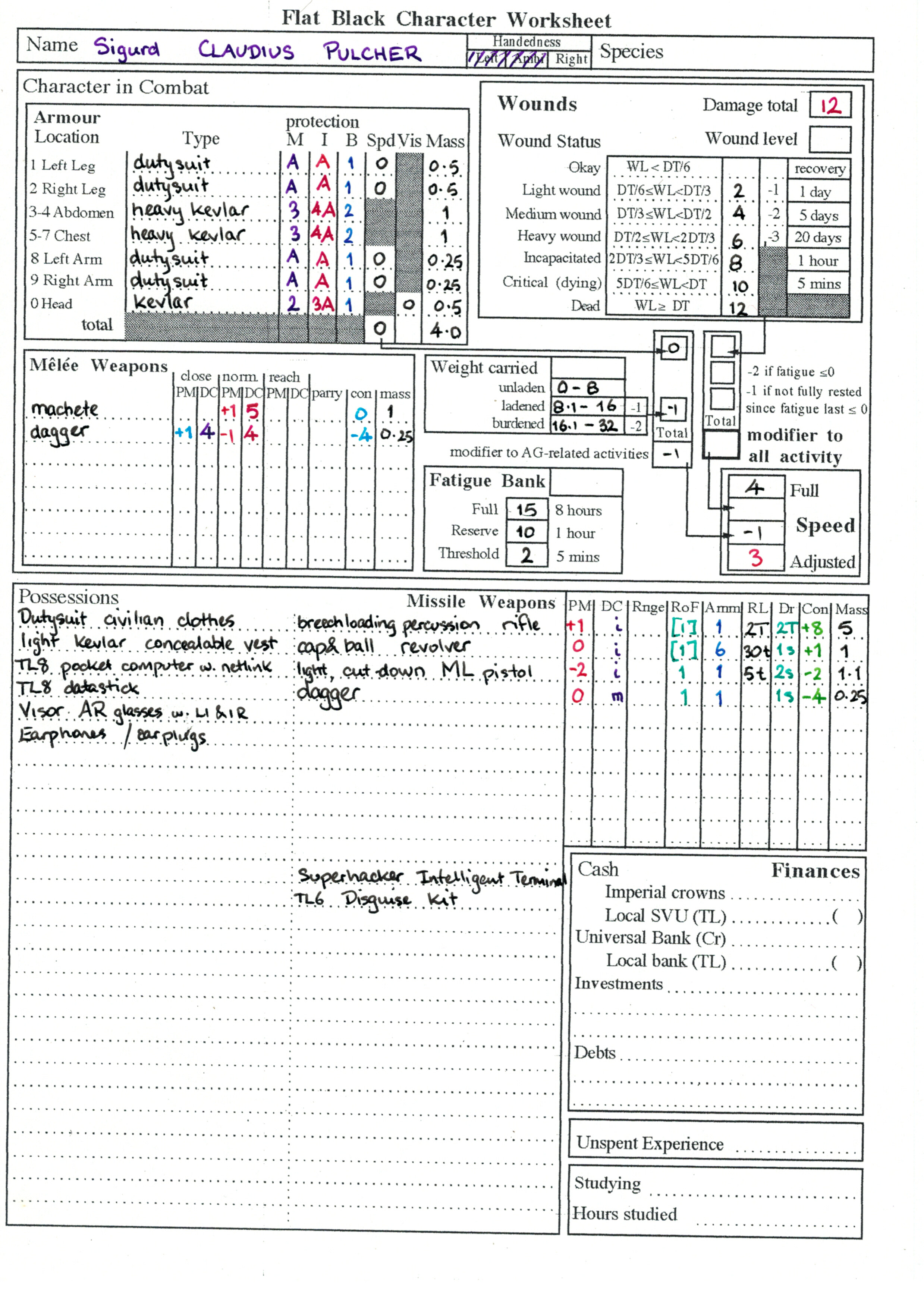