Ryan Spangler (of Sol - Last Days of a Star fame) has a new game and it’s an abstract: Organism. 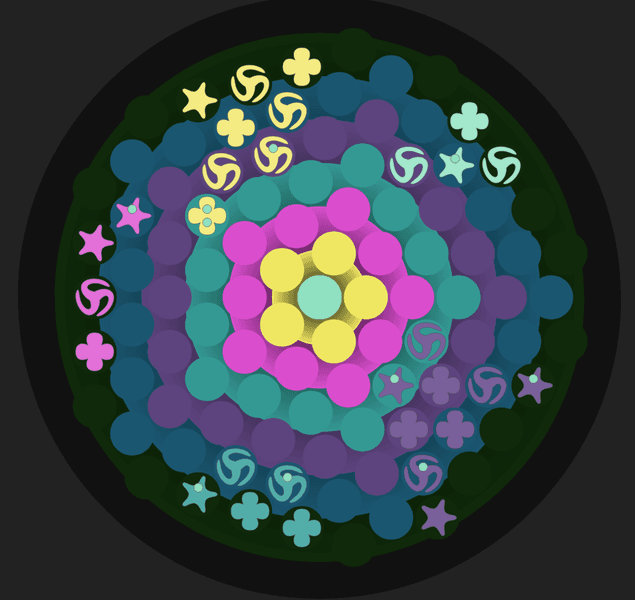 In this game every play has an organism which consists of three components: eaters, growers and movers, and each one does what you would suspect it to do! Each turn you choose to eat, grow or move, and activate each of the respective elements. You to this to score points, either by moving up to and successfully contesting other players’ pieces or by holding the middle and scoring points each turn (a la King of Tokyo or Twilight Imperium). There’s an alterate win condition, if you manage split your organism into three separate survivable entities.
Ryan built a website for playtesting the game online. It’s a bit wonky but it does the trick. I’ve only played a single game last weekend, but I had a lot of fun and I’ve joined two more games since.

I just wanted to see if anybody would be interested in giving this a go. Ryan asked not to share the link to website publically yet, but I can provide it as well as the rulebook to anyone who might be interested.

I’d love to give this a try.

Great! I’ll send you a message with the link and the rulebook.

I’m eagerly awaiting this one on KS would be keen to give it a try.

Fantastic! I’ll wait until tonight if anybody else wants to join and set up the game then.

Alright, I’ve set up a game. If you login using the same username you’re using here, you should see ‘tekeli’ under active games. Click on it to get started.

I’ve already started by placing my three starting elements on my home spaces and took my first action. @RogerBW is up next.

To take your action, select one of the three actions using the symbols on the left. For each element of that type you have one activation. For example, if you have two growers and choose grow, you can do it twice. Two things are important here. First, you can activate the same element multiple times (e.g. if you have three growers, you can grow from the same one up to three times, as long as you have the necessary food and space next to it) and, second, for each activation you can choose to circulate instead.
Remember that you’ll need to confirm once your turn is complete. There’s also an undo button, which is quite helpful.

If you don’t have any questions right now, I’d suggest that we get started and figure out any issues as they come up.

Oh and one thing that’s a bit annoying for asynch play: there are no email notifications, so you’ll have to check the state of the game yourself.

I’m far from groking what a sound strategy is here but the presentation and symbology looks quite slick.

It took me most of a game to figure it out. Also, this is quite a tight board. You can choose the number of rings, and five rings would have made for a more open game. But we’ll see how it plays out.

And done, to @GeeBizzle. Yeah, this is probably going to end in flames (I didn’t know protoplasm could burn that well) but I really like the thematic integration so far.

I think the puzzly/chessy feel of this is starting to come through. So far big thumbs up.

Yeah I’m only starting to figure out positioning. Getting to the middle is one thing. But doing it in a way to stay there is something else entirely.

So we are getting into conflict territory now. The main thing here is that each type corresponds to a number according to the number of its ‘arms’ (movers = 3, growers = 4, eaters = 5). Conflict happens according to the rock, paper, scissors principle: 5>4>3>5. However, all conflict happens simultaneously. So if player A’s grower moves next to player B’s eater AND mover, both B’s mover and A’s grower are removed. Each player then scores 1 point plus potentially extra points if capturing elements led to removing the last element from another players organism and thereby destroying it.

Also, remember that you are not allowed to move one of your elements next to another players element of the same type.

Is it obvious that I’m off work today.

Haha same here, although I’m off for the whole week.

@mr.ister i feel I’ve made a terrible mistake. Hedging my bets on glory vs annihilation.