Finally, we’ve got a Wehrle apologist in the team!!!

I know that people love Pax P2 and I’m impressed by Werhle enough to check out anything at this point, but this review does kinda make it sound as though “the cards choose who wins regardless of skill”.

My experience is still too limited to comment on what this game is (OH GOD WHEN WILL THIS HELLSCAPE END?!), but I think what makes a game worth £100 has massively diversified over the past few years.

It used to be that £100 had to mean BIG with long run times, lots of plastic, involving many people. Now there are games like Oath that appeal to a niche crowd and wouldn’t be financially viable in any standard retail environment. You’re paying for an idiosyncratic experience that is left of centre and doesn’t even try to make concessions to appeal to the masses (or at the very least limits how much it does so).

To see this sort of game lean fully into deluxe components is all kinds of crazy. I guess what’s what “Root 2” gets you! This seems like the weird sort of home brew PnP that someone would bring to a convention that would never appeal to a publisher (I’d lump Sidereal Confluence in the same bracket for example, though that’s half the price). And by way of Sidereal Confluence, the need for something expensive and crazily unique is lessening as the board game arena becomes more diverse anyhow. The £100 is more of a self selection barrier than a question of what it’s worth.

We just wrapped up the first forum game and are starting the second if you want to see one pictured in full.

Why “apologist”? You think Wehrle’s games are controversial?

(“Eklund apologist” is a combination of words that makes sense to me, but that’s a different kettle of fish entirely.)

Nah, not in any serious way. Just in the sense that SUSD were fairly luke warm on Root, good game that’s almost great etc, but Tom is all for it. The “it’s a feature not a bug” comment in particular.

Well, that was a fun review. Even more enthusiastic than I expected it to be! The “make sure you have a group in mind” to buy it comment struck home though.

I suppose I do kind of have a group in mind, just, uh, probably not anyone I can actually meet up with.

I’m also lukewarm on Root (though, the expansions have me more interested, but I bought Oath instead), but enjoyed my only game of Oath so far. Sadly, one of the group I had in mind will be leaving for Japan later this year so I’ll see how often I can even get it to the table.

Oath is pretty fun as I came to the table with the expectation that it’s a game about making stories through gameplay. Expectations satisfied.

I dont need to own it. But I will be eager to play it.

Tom did well in this review I think. It was a fun watch. Him and Ava are a good addition. I dont gel well with Quinns and Matt any more. Im more in tune with “early Quinns”.

It can be a bit hit and miss if I agree with Quinns or not although I’m always entertained.

Tom’s review was excellent for what is a hard game to explain. I feel like it gave enough of a sense of the game for people to establish if it will gel with them or not.

I bought the game for the stories and even when I play three handed (I kind of went in with the expectation that I would be my group for the most part) there are stories to be told. When soloing the kingmaking/shifting alliances aspect is great fun because I don’t care that much which of the three wins. I have yet to play multiplayer but as I am now playing on the forum game I will see how that works out. Even in my solos I keep being surprised by which player wins. Also my game is becoming very Arcane and the Spire is just the best edifice.

I think Oath is an excellent game and I think my money was well spent. These haven’t been the best times to have large sprawling game nights but I do hope those times will return and then my local player pool offers a lot more potential than right now.

I must say, these days, I am all in for Tom reviews. He does really put across points that you can like or not about the game, and makes it fun to watch on top. And just when I was noticing that towards the end of the review he had beard and at the beginning he was shaven, he got me chuckling “making a joke” about it. Kudos to him.

I must admit that from watching the review, and a little bit of the forum game, and other sources, I am not fully convinced I will be buying it. Mainly because I think this game will require a pseudo-loyalty from a group that I don’t have available right now. I will definitely want to play it if it comes by, but I think it is going to suffer a bit from the Root complex of The Teach, although not because the game will be difficult to grasp, but the concept/continuity will. Also, having played (and owning) Root and Fort, I can see how the cards are the main subject on these games, and I think I have enough games of that sort of interaction in my collection / gamers club circle…

So I have a feeling that this is going to join my list of Great White Whales, like Twilight Imperium IV or Dune. Would love to own it? Yes! But will I play it?? Unlikely.

I love the art for this game but having seen Kyle Ferrins concept art I really want to see a game that pushes him to do the more complex and detailed pieces. 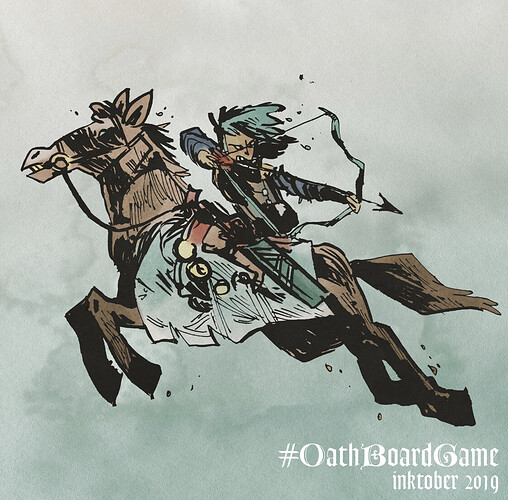 Maybe the tentatively-titled Void Lich will be that game? He’s been publishing some sci-fi art and I think that’s what it is for.

I must say, these days, I am all in for Tom reviews.

Me too. I thought he gave a great overview of how the game is to play without diving too deep into the specifics of the rules, all while being entertaining throughout. His enthusiasm for the game really came across but was well-balanced by his section at the end on who is this for vs who isn’t it for.

I left the review feeling very sure that Oath wouldn’t be a good purchase for me thanks to Tom’s explanations, but I would happily play it if someone else suggested it and expect that I’d enjoy it.

I didn’t look back through the archives but my immediate reaction was that this is the best review that SU&SD have produced in a while. My only criticism was overuse of the phrase “get into the weeds”!

My only criticism was overuse of the phrase “get into the weeds”!

Yeah, I’ve noticed a lot of repetition in the phrasing/structure of his reviews. The classic “As [A] as a [B] in a [C]” hyperbolic allegory pops up in pretty much every review, like it’s Top Gear or something. Still early days for learning though! Matt used to be quite similar in his editorial mannerisms way back when.

In particular, I feel that using the above phrase to describe how tense a game is needs to be banned in game reviews in general (not just SUSD, for everyone). It’s grown to become quite hack comedy. It always seems forced in to hit some sort of joke quotient rather than out of necessity. I get it, it’s easy and meme-able for the rabid redditors looking for that quote to repeat in the comments, but I cringe every time.

Tom is developing really well. I was on the fence at first, but really enjoyed the Oath review. I said it a few weeks ago, but I often feel reviews of heavier games spend too long describing how hard and long a game can be to learn. I thought he reached a great balance of covering that aspect without it taking over the entire review.

I admire the attention to detail. Not just the beard (which was excellently done), but things like the whiteboard and the very detailed video editing for small but valuable effects. Really nicely done.