Spent nearly an hour chatting. I miss just going to places casually. In any case I came home with just a small stack of games, two of which I had actually pre-planned… only the last one was an impromptu addition: 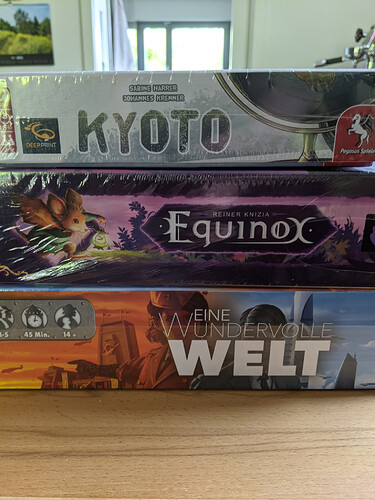 I chatted with FLGS guy about Spiel des Jahres and he was miffed about Zombie Teenz and the non-inclusion of–among others–A Wonderful World, about there not being a Sonderpreis for Best Solo (as a nod to the pandemic) and he said Arnak doesn’t belong in Kennerspiel because it is an Expert game and he is rooting for Robin Hood and Fantasy Realms (which was incidentally sold out). We talked how all the games nominated for SdJ are finite games that will be over at some point–though he was just planning his second playthrough of Robin Hood. Oh and he played the My City campaign 4 handed… because he could. And I told him that there are rules in Calico to mitigate random for two players and that he should try it solo

Equinox . It’s a Knizia and Plan B belongs to Asmodee now. The materials are really lovely, I’ll have to take a picture of the stones. The cards are the same size as Century Spice Road I think and I have no idea what the little cloth sacks are for. The box has the exact same size as Century as well and they look lovely stacked

The bags are for player reference to remind who is who - according to Plan B.

The cards are mahussive. Beware: it’s a table hog. And yet, I think I’ll keep this one over the much more compact Colossal Arena

And not just because Sottosanti was my best friend in High School. I bought it out of pity/solidarity and then it straight out fired 7 Wonders from my collection. It’s really good. 7 Wonders was always middling for me and I find Neom just does all of it better, with an excellent solo game to boot.

Still, with everyone else, why did you name it Neom? I personally would have aimed for “Opolis” as a generic city name.

Oh, Neom was one I was interested in at some point. it was touted as being a bit like Suburbia.

Maybe a bit. I get 7 Wonders, Isle of Skye, and Galaxy Trucker from it.

Galaxy Trucker because you’ve got a road network, so as you are drafting tiles you’re trying to fit them all into your city and IT DOESN’T WORK and you’re going crazy.

Isle of Skye because of the Cornerstone tiles, which act in the game like the IoS scoring tiles, rewarding you for pursuing certain set collection or spatial puzzle strategies. They keep the games fresh and different.

Suburbia is so much more math and sliders.

I impulse bought Roll for the Galaxy. As a proud owner of the entirety of Race and also New Frontiers, I really thought I was done with that Galaxy. Then three turns into my first BGA session I found myself tabbing over and placing an order.

Those dice mechanics, tho…

The bags are for player reference to remind who is who

Lol wut? That is weird.

I’ve got plenty of table hoggers but none with just such a pretty purple/pink box. Why two colors though?

My sympathies. Here in the States Prodigy’s having a warehouse sale so I got it for $36 US. 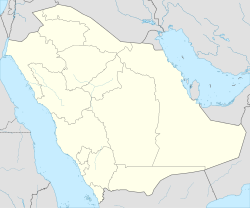 Neom (styled NEOM; Arabic: نيوم‎ Neom, Hejazi pronunciation: [nɪˈjo̞ːm]) is a planned cross-border city in the Tabuk Province of northwestern Saudi Arabia. It is planned to incorporate smart city technologies and also function as a tourist destination. The site is north of the Red Sea, east of Egypt across the Strait of Tiran, and south of Israel and Jordan. It will cover a total area of 26,500 km2 (10,200 sq mi) and will extend 460 km along the coast of the Red Sea. Saudi Arabia aims to complet...

It’s also a massive Saudi vanity project (In my opinion)

A Wonderful World was only just translated into German for the current round of SdJ but wasn’t nominated. So I am interested to see how this card drafting compares to 7 Wonders because that’s what he sold me: “better than 7 Wonders” and a solo mode.

Yessssss! Love this game. Never actually played 7W (I know, I know), but it’s an appreciated change up from Sushi Go. The solo mode is pretty decent, but it’s difficult to form strategies with the limited draft.

impulse bought Roll for the Galaxy . As a proud owner of the entirety of Race and also New Frontiers, I really thought I was done with that Galaxy. Then three turns into my first BGA session I found myself tabbing over and placing an order.

Those dice mechanics, tho…

My favourite game of all time. Don’t be bad mouthing those dice mechanics

Oh no! Not bad mouthing. Three turns in it’s what sold me.

The Lehmann series is like Steak. You’ve got a hamburger, a ribeye, a sauerbraten… I was thinking hey I’ve already got enough cow meat but the dice are a completely different sauce that makes it a different dish.

Unlike, say, the Leacock games where he keeps trying to remix the dish and somehow it tastes the same. Forbidden what now?

Yesss! I do love the dice. My one niggle with Rollftg is some lucky planet draws make it far too easy to repeatedly rinse your dice through the product/ship actions to steamroll a quick (and completely unsatisfying) ending. But it isn’t too common, is reduced with higher player counts increasing the point pool, and it usually finishes the game super fast too.

I’m excited to see what New Frontiers does with the formula. With the galaxy franchise, each new base game is a clear slight variation on the foundation Race experience, but built in a way where the expansions can take it into completely new directions. I know Frontiers had many luke warm reviews, but I’d bet my house it’s all hinging on the expansions to make it more different from Race.

Well, New Frontiers is straight up the Puerto Rico remix.

The short version is that it successfully fixes all of Puerto Rico’s problems:

At the same time, it fails to replicate any of Puerto Rico’s successes:

I’ve been toying with a homebrew expansion that would inject some of the tension back into the game. I didn’t love Puerto Rico, but New Frontiers failed to replace it. Oddly, I think Bruxelles 1897 is going to be my Puerto Rico killer - despite sharing none of the mechanics, the interaction and decision space feels oddly congruent.

Then three turns into my first BGA session I found myself tabbing over and placing an order.

That could be a thread in itself, “games you’d bought by the end of your first play”.

I played Roll once and it struck me as “Race, but even more random”. Clearly many people disagree.

I played Roll once and it struck me as “ Race , but even more random”. Clearly many people disagree.

That was my reaction too. I really disappointed the person showing me the game that I wasn’t an instant convert to Roll is better than Race. I could happily never play Roll again.

I’ll back you up, Roll is not better than Race! But my conclusion is sufficiently different, sufficiently good.

I would read this thread

Perhaps more commonly, games you bought after one play (and what happened after)

Usually I never play it again, get frustrated and sell it.